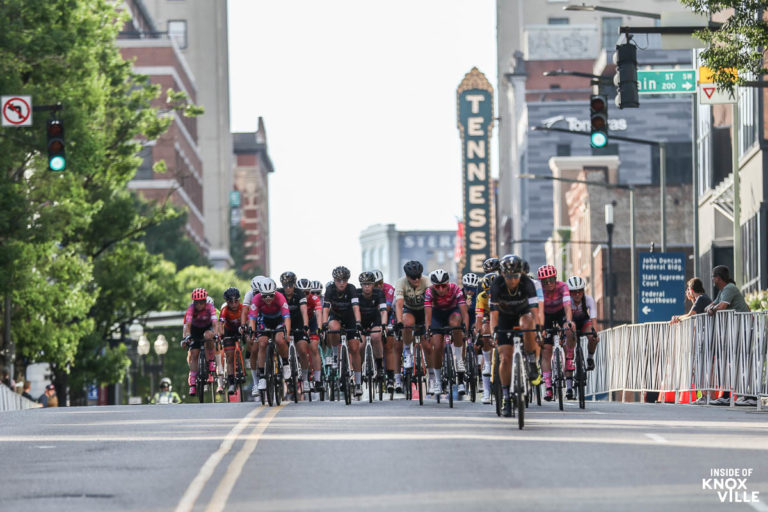 The weather was steamy, but cooler than it might have been. The crowds were enthusiastic from downtown through South Knoxville and for a weekend, the eyes of the cycling world was on Knoxville. This year’s races marked the fifth year Knoxville has hosted the event, with a sixth year scheduled for next June.

The downtown portion of events got started Friday evening with the women’s Criterium, a brutal little race with a 1.1 mile course circling through downtown. The race kicked off on Gay Street at 6:00 pm and ended after a 70 minute sprint. The trickiest spot on the route was the return to Gay Street involving three 90 degree turns.

The men’s race followed in short order with 89 men riding the same course, but for an additional 10 minutes. The results were similar, as well, with last year’s champion, Luke Lamperti of Trinity Racing repeating his win from last year. As the lone American on a twenty-man British team, he raced alone against complete teams, sprinting out toward the end for the win.

Second place was a photo finish, with Gavin Hoover (L39ION of Los Angeles) finishing second and Scott McGill (Wildlife Pro Cycling Team) coming in a hair behind for third. The race was an exciting one with several failed breakaways followed by what appeared to be a possible successful break near the end. The duo was caught however, and Best Buddies Racing took over the lead, only to be foiled at the end.

After an off day, the Women’s U.S. Pro Road Championship kicked off at 9:00 am Sunday morning. The course, which was the same for men and women, wound 7.1 miles through downtown and south Knoxville. The women completed 10 laps for 71 miles, finishing just after noon.

The race featured an early breakaway that worked, with Emma Langley (EF Education-TIBCO-SVB), Skylar Schneider (L39ION of Los Angeles) and Lauren De Crescenzo (Cinch Rise) leaving the peloton after just four laps. Schneider stayed with the trio for four laps, leaving the two to work alone for the final two laps. They kept the pack at bay and Langley, who had cleverly let Schneider do more of the work, bursting into the solo lead as the duo rounded the final corners leading to the finish. Langley’s teammate Lauren Stephens finished third.

The men’s race followed the same course, but repeated it 17 times, for a total length of 118.5 miles. Kicking off at 1:15 pm, and featuring the largest crowds of the weekend, the race concluded just after 6:00 pm. Kyle Murphy became the new U.S. men’s champion, defending the title that his team, Human Powered Health, also won last year. Second went to Tyler Stites (Project Echelon Racing), and third went to Magnus Sheffield (INEOS Grenadiers).

On a day when a strong breakaway with a number of riders fluctuating around 6 seemed poised to sustain their break, it was not to be. They were caught on the final descent off Sherod and pulled back into the pack. Murphy was close to the front and, thanks to the support of teammates, was able to launch his final push for his wine just before the end of the race.

Once again, it was a great event that spotlighted our little city, and drew national attention to our Appalachian jewel.