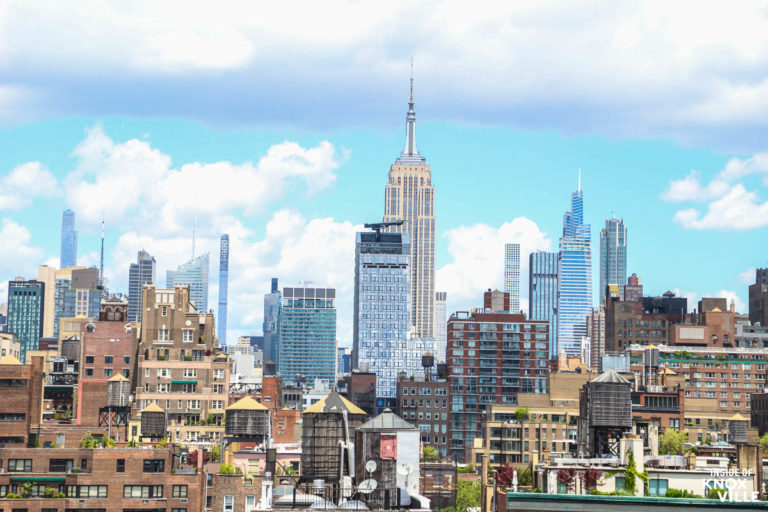 For those of you who knew I was leaving town for a few days, this article won’t come as any surprise. I’ve taken the privilege since I started writing about this urban spot, to write about other urban spots when I visit them. Particularly if they are called New York City. Last week Urban Daughter and I had our first Father/Daughter trip in almost twenty years, with a five-day trip to New York City, so here’s a glimpse.

As was the case when I traveled there with a friend last December, we stayed in the Village in the Washington Square Hotel. While there was some overlap, we did some things that were quite different than the last trip. We left the Village for several outings and saw some different parts of the city. For the images presented here, I focused more on people and buildings in and around the Village, though not exclusively.

We hit town last Monday and, after dropping our bags, went out for the first of many excursions through Washington Square and the surrounding streets. The square, which has long been a cultural center for that area of town, is packed with life from daylight to midnight each day when it closes. It’s been a hub for folk music, for protests dating back as far as the early 1800’s and it continues to be a gathering spot for chess players, homeless people, families, college students and hustlers of all sorts. It is my current favorite spot in the city.

We enjoyed Middle Eastern food the first night in a restaurant in SoHo, and we returned to SoHo a few nights later for Spanish food. We enjoyed seafood later in the week on the upper west side near the Beacon Theatre, and French food next to the Belasco Theatre on 44th Street. We also drank prodigious amounts of tea and cappuccino at Café Reggio.

We also enjoyed music in one form or another almost every night. Monday night was producer night at NuBlu in Alphabet City. It’s a mashup of artists and styles every Monday night and the group also hosts a festival with which Questlove has been associated. We think he was there that night. Who knows? The guy could definitely pass for him.

Carrying the music theme forward, we saw Ringo Starr at the Beacon Theatre ($140, much cheaper than Paul!) and it was a blast. High energy all night long, and Ringo seems ridiculously younger than his 81 years. Steve Lukather (Toto), Colin Hay (Men at Work), and Hamish Stuart (Average White Band) were each in the band and performed their band’s respective hits along the way.

Edgar Winter was supposed to join (and was the member I was most looking forward to), but in a reminder of our times, he had COVID-19 and didn’t appear. We counted ourselves lucky they didn’t call off the show on the count of exposure of the other members. The group played the next night at the same theatre before announcing that Steve Lukather had also tested positive and postponing the remainder of the spring tour. After purchasing tickets a year ago, we barely saw Ringo.

Along the way, we enjoyed the streets, which are not simply for getting from one place to the other, but rather for listening to, watching, and enjoying. Snippets of conversation were delightful: “Well he’s making 160K a year, he needs to be independent.” One morning on Washington Square, God appeared telling everyone around in rather explicit language that they best start acknowledging him. A homeless man prepared to confront God, while another held him back, saying, “You don’t always have to respond. He didn’t lay no hand on you.”

We also saw Linda May Han Oh at the Village Vanguard, performing her “The Glass Hours.” The performance was awesomely Big Earsesque. It’s interesting to hear music in New York City and think, “That sounds like something I would hear in Knoxville,” but there it was. We rounded out the musical adventure for the week with “Girl From the North Country” at the Belasco Theatre. The provocative musical was nominated for seven Tony Awards, winning one on Sunday night. The powerful ending features the cast singing on the floor in front of the stage. We were front row and could have touched them.

We visited MOMA for the Matisse exhibit and the Whitney after buying tickets by (fortunate) mistake. Both are amazing and MOMA has a Beauford Delaney (no mention of his hometown, just New York and Paris). We walked to Little Island and through the High Line and into Chelsea. We visited the Strand Bookstore and the New York Public Library (with the marble lions from Knoxville seated out front). Along the way, I was mistaken for a New Yorker twice. Unfortunately, I had to open my mouth and the south poured out.

After averaging around 20,000 steps a day for three days, we slowed down the last two. I played chess with Marty, my new chess buddy, who told me his life story, which included eight brothers and sisters, eight children, and no current wife. There were the cocaine years and the years as a drug counselor. He’s doing better now, he told me, as he drank from his flask at 8:00 am.

Marty was a very philosophical guy, passing out jewels of wisdom as he sold cigarettes for a dollar off to the side. He summoned a park worker to escort a young man from the park who was smoking crack as we watched. I beat him most games then read here that he throws games to smooth the egos of those he plays. Nice guy.

We also spent most of a day in Central Park, simply meandering our way from the south end toward the north. It seemed we walked for days (four hours), visiting the Belvedere Castle and walking a bit north of that around the Great Lawn. We didn’t have a map and it was a bit disappointing to see that we only made it about half way up the park.

It was lovely being in New York City and slowing down to wander about the park. We saw so many beautiful children in what appeared to be summer camps. Moms and nannies pushed strollers in every direction. Cyclists, joggers, serious walkers, couples, and families moved in every direction. It’s a very New York spot and, simultaneously, one of the least New York spots. At least it runs counter to the frenetic New York City narrative you come to expect after spending time in or near Times Square.

We ended that day with a wonderful meal at Babbo, followed by a slow wind-down at Cafe Reggio. A final stroll through the square found large audiences watching a French film with the backdrop of the arch framing the Empire State Building. It wasn’t quite the TVA Towers, but not shabby.

We left the next morning with returning on our minds. What we’ve done once often becomes a tradition in the mind of Urban Daughter, and so, next June may find the two of us back in the city building new memories.