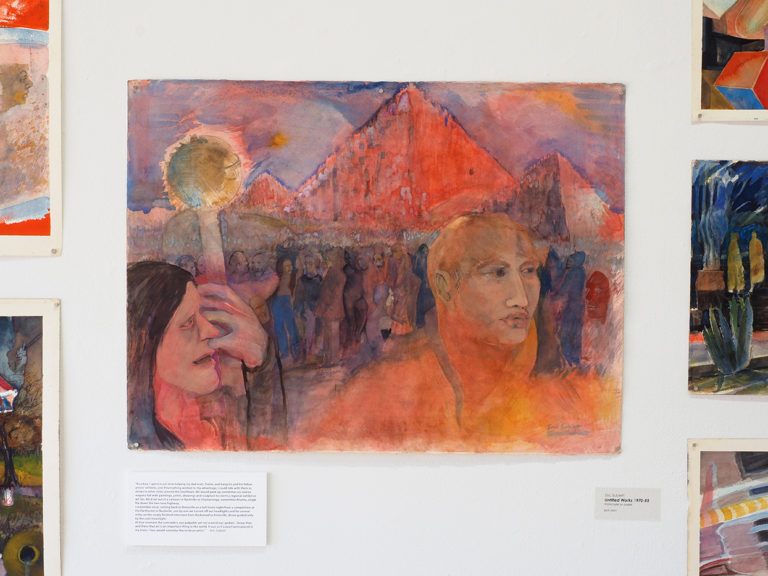 How do you sum up a life that was both integral to a creative community while largely unknown outside those at the center of that moment in history? An attempt to present glimpses of the person who was Eric Davis Sublett (1951-2018) is currently presented in the form of an exhibition, “Eric Sublett: The Creative Life,” at UT’s Downtown Gallery. The exhibition was curated and designed by R.B. Morris, Gary Heatherly, and Walt Fieldsa in partnership with Eric’s sister, Carole Sublett Colby.

Eric’s family has roots in Maine, but he was born in Bristol, Virginia, and moved to Knoxville at age three, which is where he lived the remainder of his life. His father was noted UT Professor and artist Carl Sublett (who currently has an exhibition at Bennett Gallery) and Eric grew up surrounded by art and artists. He began making his own art at a very early age and never stopped, primarily painting and drawing, but also engaging in film, photography, and writing.

Here’s how Eric summed up the magnetic pull of an artistic life:

As a boy, I spent much time helping my dad matt, frame, and hang his and his fellow artists’ exhibits, and if everything worked to my advantage, I could ride with them to the shows in other cities around the Southeast. We would pack up sometimes six station wagons full with paintings, prints, drawings, and sculpture to storm a regional exhibit or art fair. We’d set out in a caravan to Nashville or Chattanooga, sometimes Atlanta, single file down the two-lane highway.

I remember once coming back to Knoxville on a full moon night from a competition at the Parthenon in Nashville, one by one we turned off our headlights and for several miles on the newly finished interstate from Rockwood to Knoxville, drove guided only by the cool moonlight.

At that moment the comradery was palpable yet not a word was spoken. I knew then and there that art is an important thing in the world. It was as if a pearl was placed in my brain. I too, would someday like to be an artist.

Eric earned a BFA from UT with a major in Watercolor and Oil Painting. He became central to an emergence of artistic and cultural efforts in Knoxville during the 1980s and 1990s. As R.B. Morris explained to me, he was a central link between the artists and the musicians, between the academic world at UT and the first glimmers of a contemporary downtown in what we now call the Old City.

He co-edited the Hard Knoxville Review (1981-1984), helped open a gallery at 200 East Jackson in 1982, an artist collective called 200 East. He and his family opened Sublett Gallery (1984-1989) in one of the seven homes called the Artist Colony on the edge of the World’s Fair Park, becoming the first business to operate there after the fair. Additionally, “He was a founding member of CHROMA (1988), a non-profit group of artists initially formed in an effort to save the seven houses of the Artist’s Colony.” He also was the first to propose a part to honor James Agee a few blocks from his childhood home and was a founder of the group who accomplished that goal.

The thread that runs through all the efforts was a sense of collaboration. Much of what you’ll encounter in the exhibition reflects that. He made the flyers, which were the essential publicity of the day, for many people’s events. He provided artwork for album covers. He connected communities and was happy to photograph, write about, and otherwise promote a large range of people in the creative community.

I messaged with Gary Heatherly who had the following remembrance:

Eric and I graduated from West High School together in 1969. We became very close friends after we both enrolled in art school at UT in the Fall of 1969. Those years were incredibly rich in the intense changes that were happening in the youth culture. The arts were blooming in the areas of visual art and music. We were in the midst of protesting a war and understanding how the power of a youth driven movement could actually change the world.

Eric was on a mission to promote the arts in Knoxville via the various groups he formed and guided as well as the 11th Street Arts Colony in the Victorian houses next to the World’s Fair Park. I spent numerous times visiting the Sublett Gallery discussing art and music and also it was my introduction to the Candy Factory, where my photo studio would be located for the next 25 years . . .

Eric was one of my dearest friends and he is missed every day but through his art and the seeds he planted, his dream continues to flourish in our wonderful city and beyond. This exhibit that RB and I had planned for a number of years has brought us back together as friends and that is what Eric would have wanted.

I met with R.B. to look through the exhibition and discuss Eric and why this exhibition matters.

When Eric died, his home was filled with enough works, according to R.B., to do an exhibition this size several times over. He said they found years worth of “flyers, posters, brochures, announcements for art shows and music shows, art performances and happenings.” He said sorting through what was there took days. Much of it has never been seen until this exhibition.

Of the exhibition, he said, “It just needed to be done.” Originally planned for 2020, it was delayed for two years due to the pandemic. He said it represents different eras and obsessions over time. “He would say, ‘I’m not really doing anything,’ but if you to to his place, he’ll have two or three things going . . . He moved more into video and overseeing his Dad’s work . . . He did fall into the thing of helping other people. I was a huge beneficiary.”

R.B. also recounted how he excelled in sports, including baseball and football, as a young man and was a big supporter of UT. “He was great to watch a game with,” because he was knowledgeable about the various sports. He was a recognized artist by high school. His photographs document a range of vignettes and spaces, many now lost, in and around Fort Sanders. His paintings on display include works from a range of eras. Some of his poetry is also included.

In sum, R.B. said, “He was a man of integrity . . . He was my best friend and in so many ways a mentor.” His devotion to the arts and his devotion to Knoxville are all prominently displayed throughout the exhibit. It’s an important opportunity to get to know a person who was critical to the arts community at a particular time in our history when he was needed. Please make an effort to see the work and get to know this person who made a difference in our city.

A special thanks goes to Gary Heatherly whose photographs are used with his permission throughout this piece.