State and Local COVID-19 Cases and Death by Month 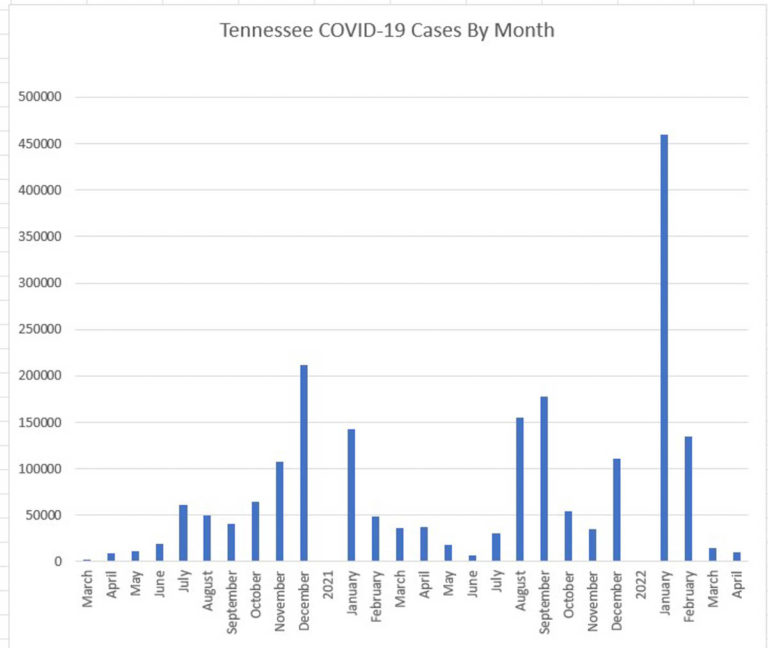 Here’s a look at where we are at the state and local level by month, something that I started early in the pandemic at the request of a reader. It provides an easier way to see larger trends and relationships while not being mired in the intricacies of daily numbers. I’m also including a few words on international and national numbers centered around my cutoffs for returning to more regular reporting (spoiler: We aren’t close to those cutoffs). Remember, the cutoffs are simply what seems reasonable to me and nothing more.

It also must be said that case numbers and comparisons are more suspect than ever. Due to home testing, many cases are never reported. Additionally, with vaccinations preventing more severe cases, it is very likely that a number of people have the virus and dismiss the symptoms as allergies or a cold.

Internationally, new cases are averaging just over 507,000 cases per day, right about at my cut off of 500,000 per day. It was well over that number just a few weeks ago at over 3.4 million per day at the end of January. Further, new cases per day have fallen by 18% in the last week, so the near future looks to be even better. While numbers are currently the highest in Europe and Australia, they are dropping. Of major concern at the moment is Taiwan which has largely gotten through the pandemic better than most countries, but has now seen an over 200% increase in the last week.

Deaths also continue to fall and have fallen 22% in the last week. After hitting almost 11,000 deaths per day in early February, the current seven-day average is 1,947, well below my cutoff of 7,500 per day.

Nationally, cases have been rising, including a 54% increase in the last two weeks. Currently averaging almost 66,000 cases per day, the number remains below my cutoff of 75,000 per day, but not by much, and it could easily reach that level by next week. Following a peak of almost 825,000 cases per day in mid January, it probably feels lower than it is. That said, the number remains below our lows last fall and there seems some hope that this surge may be more of a short-lived bump.

Turning to the state of Tennessee, the news is largely good, though with some asterisks. The great news is that after hitting almost 460,000 cases as recently as January, three straight months of declines have brought that number down to less than 11,000. April’s case total is the lowest number since last June and is only higher than that month and the earliest months of the pandemic. The current average of 407 cases per day is well below my cutoff of 1,200 per day.

However, this is a case where the monthly view obscures an important fact: While the case numbers remain relatively low, they have increased 57% in the last two weeks. This does not bode well for a continued monthly decline, with May looking likely to show an increase. The question is how much of an increase? I’m holding out hope we see a bump rather than a surge this time around. That seems to be happening in New York City where the latest increases started. The argument that we could see a true surge where they do not, however, lies in the fact that their vaccination rates are about 79%, while ours are about 55%.

COVID-19 deaths in the state showed a dramatic drop in April, with a drop of about 50% to 555 for the month. We are now averaging 6 deaths per day in the state, far below the 40 I set as a cutoff. That said, the same asterisk applies here: Deaths are increasing over the last week and with the rise in cases, we might anticipate that increase to continue until cases fall back. The 555 deaths is lower than any month since last June when deaths were under 200.

Cases in Knox County are low. At 399 for April, cases were the lowest of any month since last June and outside that month, lower than they’ve been since the earliest months of the pandemic. That said, they are increasing. For the week ending April 9, there were 49 new cases. In the three weeks since, case numbers rose each week, to 60, then 127, and most recently to 131. The latest reported average is 15 per day, which is far below the 100 per day cutoff I established, but is 300% higher than just three weeks earlier, which is a concern.

Deaths have plummeted in the county and totaled six for the month. My cutoff is 7 per week. This is the lowest number of deaths for any month since June 2020. If the current increase in case numbers continues, we will have a rise in deaths. If we can keep it from becoming a large increase or surge, we should be able to keep death rates low.

Unfortunately, we are at the mercy of the virus locally. There are very little in the way of mitigation efforts currently in place and it’s hard to imagine how bad the situation would have to become for any serious masking to occur, let alone any other measures. By and large the country, state, and county seem determined to let the virus play out on its own terms. Here’s hoping we are lucky and the worst of it is behind us.