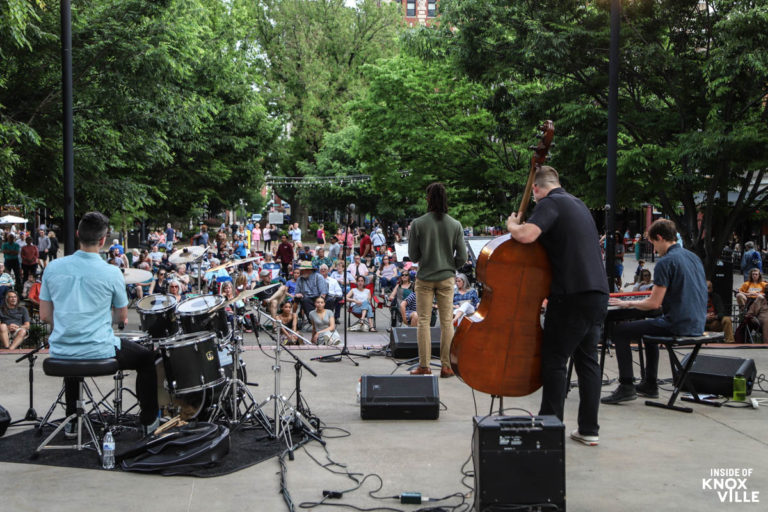 Jazz on the Square, Market Square, Knoxville, May 2022

It’s not that we’ve been dead, exactly. Even through the last three years, downtown has maintained much of the momentum that we’ve become accustomed to. Businesses have opened, new development has been announced, but something has been missing. The burst of life that usually accompanies spring in the city went missing for completely understandable reasons. This spring feels very different.

Out the gate, we had the return of Big Ears which, for those of us watching carefully, was one of the first signals that something pretty serious was happening in 2020 when it was cancelled. This spring has seen its return which, along with Rossini and the Dogwood Arts Festival, signals the opening up of the city after the winter. It’s exciting for residents, brings in lots of tourists, and gives many downtown businesses their first influx of cash after Christmas.

While we aren’t clear of the pandemic, we’re learning to live with it, and the result is a spring that feels almost normal. I’m continually reminded of the joy that I commonly experienced before March of 2020 from the simple pleasures. Maybe the break from our normal routine was an opportunity to appreciate the good things we’ve taken for granted.

All this comes to mind as I watch not only the festivals, but the simple things we assumed would always be a part of downtown return. Last week, for example, saw the return of Jazz Tuesdays on Market Square. The Sam Adams Quartet kicked it off and the music was as perfect as the evening weather. Several hundred people gathered to hear world-class jazz and it was a perfect urban moment.

In addition to being gifted with great jazz, that jazz is free. No tickets required. But wait, there’s more! Parking is also free after 6:00. There can’t be many cities where you can drive in and park (easily) for free, and attend a great outdoor jazz concert, also at no cost. It used to just feel normal and now it feels like a gift from the jazz gods. The concerts will continue through May and June before taking a break. They will return for the month of September.

This also marks the first spring since 2019 that the Market Square Farmers’ Market has started its season on the square (it moved there mid-season last year). Again, this is something that seemed like a birthright that could never be removed. Now it is a pure joy. The Wednesday market and the larger Saturday market each started last week.

There really isn’t anything like it. It’s part street fair and part social scene, to be sure, but it is also a serious time to gather food for many downtown and near-downtown residents. It has been instrumental in my education about real foods and the shifting of the growing season as we move through the summer. First we anticipate the strawberries, then we delight at the arrival of the peaches, before hoping there is just a bit more hot weather toward the end of the summer to keep the okra going just a little longer. In between, of course, there are beans, corn, broccoli, squash, tomatoes and more.

There is also a wide range of manufactured food products like pastries and pepper sauces. And then there are many handcrafted items like the ones pictured here, including those from my friend Kelley at Made by Kelley. So come, meet friends, make new ones, buy local, fresh food, and pick up useful items and gifts. The current hours are 10:00 am to 1:00 pm on Wednesdays and 9:00 am to 1:00 pm on Saturdays.

Finally, the Old City Market has returned to Jackson Avenue on second Sunday’s starting last month and running through December. Also, as bonuses, it will be open for Dolly Fest (June 5) and Small Business Saturday (November 26). You’ll find lots of artisan-made items, music, street chess and more located right in the heart of the Old City.

If we’ve learned anything about what to expect in the last three years, it has been that we don’t know what might come next. Embrace what we have and appreciate it. We’ve seen that it can disappear as quickly as the appearance of an invisible virus. There is a lot of joy to be found on the streets this spring. Seize it and hold on tightly.