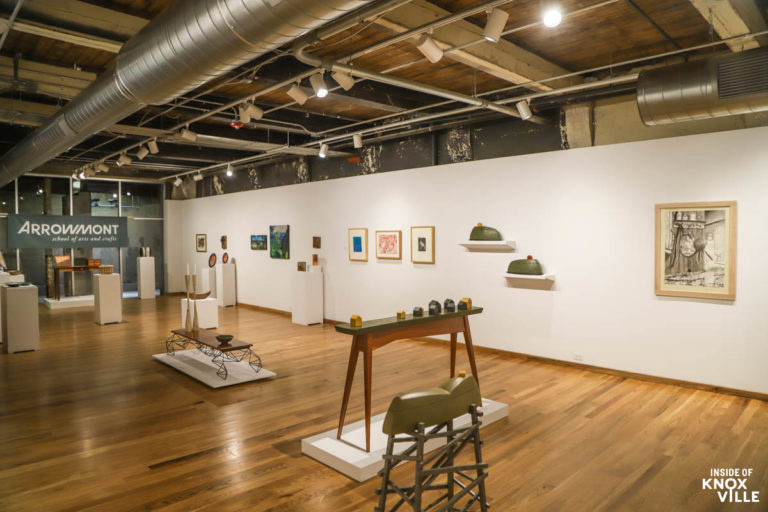 In what could be seen as a merging of a mystery and an unknown for many of us, Arrowmont School of Arts and Crafts, located on a thirteen-acre campus in downtown Gatlinburg since 1912, has opened a gallery at 110 Gay Street. Many Knoxville residents have enjoyed classes and residencies at Arrowmont over the years, but to many of the rest of us, it has remained somewhat unknown: We’ve heard of it, but we aren’t completely certain what it is.

As for mystery and intrigue, “underground Knoxville” holds a spot in our collective local imaginations that is probably larger than the actual physical space. Created when the original Gay Street viaduct was constructed about a hundred years ago, the street was raised one story in order to meet the viaduct. It left a story underneath, much of which is not accessible. But part of that space is now a gallery for Arrowmont School.

It’s the first off-campus exhibition space (there are three on-campus) the school has established in its 110 year existence. Opening last month on First Friday, it has been a long-range plan for several years, with Arrowmont CEO Trudy Hughes saying, they were looking for “a space that helps us better offer and lift up the Arrowmont experience.”

I met with Heather Wetzel, gallery manager for the four Arrowmont galleries. She joined Arrowmont just last October after years in academia, teaching studio art, primarily photography and book arts. She said she’s always had “one foot in the non-profit art world and gallery work. She’s worked in galleries before and “lived in both worlds.” Ready for a change from an academic setting and interested in putting down roots, she was attracted to this area and has a sister who lives in Asheville. She is happy to have landed at Arrowmont where she’d taken a workshop several years earlier.

The move to have a downtown gallery was underway when she joined and it quickly became a priority on her new job. After starting in October, she was downtown looking at the prospective space by February and the build-out was underway in March for the April First Friday opening. She said the event was packed, which was a bit overwhelming.

She said there are several objectives in opening the new gallery. First, they want to support the Arrowmont artists by exposing their work to a new audience. They also want to raise awareness of the classes and workshops at Arrowmont so that more people might investigate what they have to offer. She said they really want to be a part of the Knoxville art community and hope to coordinate with different organizations like Mighty Mud, Striped Light, or Able Trade to offer tastes of what they do on their main campus to people here.

The current exhibition, which will be available for viewing this Friday night for First Friday, includes work by former instructors, work study students, former interns who are now working artists. It is also a “sneak peak” for their “Starry Night,” which is their big fundraiser auction which happens May 20. Each of the artists represented will have large works in the auction.

While the entire space is retail, or commercial, that is the focus of the rear portion of the gallery. They are working on a point of sale system and building inventory in order to accommodate on the spot purchases. For now, items may be purchased, but picked up or delivered after each month’s showing. They intend to keep it fresh.

For now, the gallery is open only for First Friday. In June they hope to be open for the entire first weekend of the month and they plan to be open the first weekend in July, plus the weekend of July 15-17 (when Convergence happens in Knoxville). August is a bit uncertain, though they will definitely be open First Friday with work by Fall instructors. Starting this fall they hope to begin weekend hours (Friday through Sunday) each weekend and to carry that forward.

She said they are happy to finally be open and they will make it work as they go. They hope to eventually have a regular staff member to man the studio on weekends. They are also looking to utilize the underground connection between their studio and the Emporium, which requires installation of sprinklers. There is a small terrace under the street which they may also utilize, adding to the cool factor of visiting the gallery.

You can check out the gallery this Friday night from 6:00 pm to 9:00 pm and welcome downtown’s latest addition to the arts district.