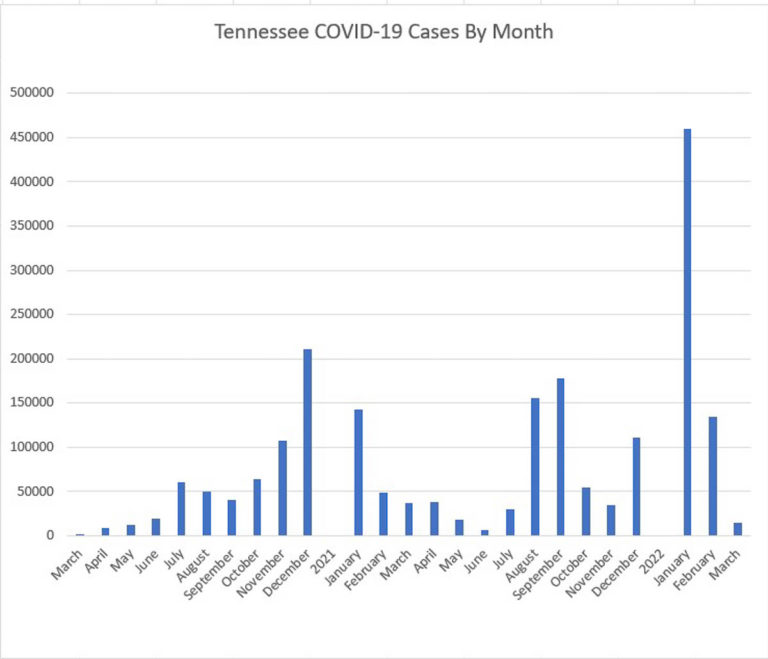 It’s time to look at our monthly COVID-19 numbers, as we have for the past couple of years. There is a lot of good news to be found among the numbers and much to celebrate regarding the pandemic. Almost every metric continues to remain far below the threshold at which I would consider returning to the weekly reports.

While this is a report focused on state and local data, a quick glance at worldwide COVID-19 cases, shows a current rate of about 730,000 new cases per day, which is higher than my standard of 500,000 per day, but the current average is dropping rapidly, having fallen 28% in just the last week and off the peak of about 3.4 million per day just at the end of January. It’s the lowest the global average has been since late December.

Confirmed daily COVID-19 deaths across the world are now 2,432 per day, well below my target of 7,500 per day. Shockingly, deaths are at their lowest point since March — of 2020! At the least, major portions of this statistic have to be attributed to the high vaccination rates in large parts of the world.

In the U.S., the story remains very encouraging, though there is cause for concern, as well. Average daily case numbers are currently about 37.6 thousand, well below my cut off of 75,000 per day. In March, the rate hit its lowest point since July 2021, a point far lower than the lull we enjoyed last fall before Omicron hit.

The concern is that new cases have risen 39% in the last two weeks. In New York City, they have risen 57% during that time frame (though to my eye, it appears possible the increase has slowed). Will we have another surge or just a brief bump? Will it result in high death and hospitalization numbers? The answers to those questions will give a clue as to whether we are entering an endemic stage.

Deaths in the U.S. are averaging 511 per day, well below my cut off of 1,200 per day and the lowest since early August, 2021. Thankfully, deaths have continued to drop rapidly, having fallen by 21% in the last two weeks.

Turning to state case numbers, Tennessee is averaging 288 new cases per day as of April 9, far below my cut off of 1200 per day. After an extremely sharp decline starting in late January, case rates seem to have leveled off in mid-April. That said, they are as low as they have been since last August and are well below the lull we had in the fall.

Looking at the monthly comparisons, cases dropped from roughly 135,000 in February to 15,000 in March. For the duration of the pandemic, the only months that have yielded fewer cases in the state were June of 2021 and the first three months of the pandemic. In other words, it was about as good as we have been since this all started.

The story with deaths is less dramatic. COVID-19 deaths dropped from around 1,300 in the state in February to around 1,100 in March. The more dramatic drop may show up in the April numbers, as the state is currently averaging less than ten deaths a day. The state currently ranks fourth in the U.S. in both per capita cases and per capita deaths during the duration of the pandemic.

Knox County has seen a similarly dramatic drop in cases, falling from about 6,400 in February to about 500 in March, far below the 100 per day average I set as a cut off for regular reporting. The March number was lower than any since June 2021 and lower than all but six of the months since the pandemic began. During the month, the county reported a number of single digit days and one day with no new cases. As of the most recent report, however, the decline seems to have leveled off.

Deaths also declined significantly, though not quite as steeply as case numbers. After reporting 95 deaths in February, the county reported 39 in March. This is roughly in line with my cut off of one death per day. Unfortunately, it does not appear the number has continued to drop in early April.

So, the numbers are, relative to other numbers we’ve seen, very good. I’ll continue to monitor the situation and will react accordingly. Blessedly, right now, we are in a good period to enjoy a bit of freedom of movement, while trying to remember the virus has not disappeared. Hopefully the next time I mention the topic will be to provide a similar report next month.