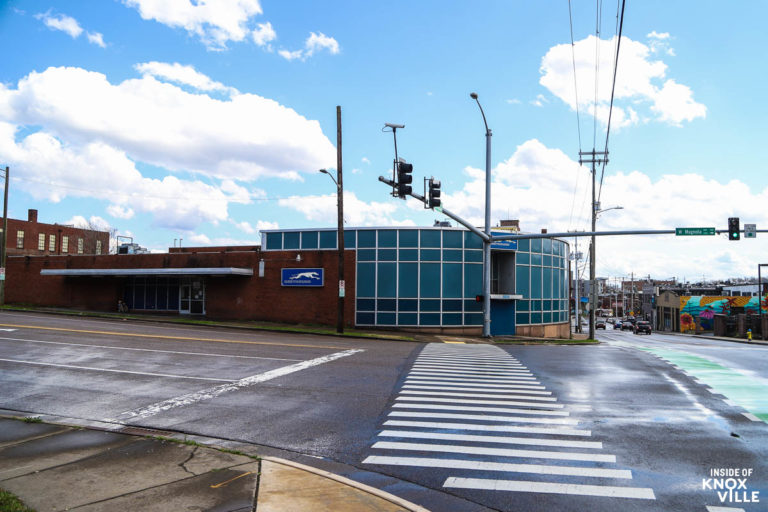 Dewhirst Properties recently purchased the Greyhound Bus Station at 100 East Magnolia. It’s another signal that much of the focus of downtown development is moving to the north and east. Residential development now sits across the street from the station, in the form of The Mews and Mews II, Regas Square is just a couple of blocks away, and the Old City is just down the hill. A spot that would have seemed disconnected from or at least on the fringe of downtown development just a decade ago is now in the mix.

While development of this particular property is a bit into the future, the announcement offered a good opportunity to catch up with Mark Heinz of Dewhirst Properties to understand their thoughts on this project and others. At any given time, a developer may have a high-profile project underway, but they almost always have others in various stages of development.

Regarding the Greyhound Station, Mark said it was a property they had been discussing for a number of years and this seemed like the time to make the commitment on the purchase. While specific plans have not been set, he mentioned The Grey in Savannah, Georgia that occupies a former bus station which is similarly built, as an example of the potential. One intriguing aspect of the building that isn’t obvious to a passerby, is the basement, providing the space with two potential levels of development. The large concrete structure might be perfect for a late-night club, for example.

Any development of the site is likely to take some time. There are two daily buses running, but they should be out of the structure by the end of April, with buses potentially moving to a stop, rather than a new station. Next, the site will require some remediation, with underground fuel tanks likely needing removal. A concept has to be chosen, architectural design completed, approvals obtained from the city, and then labor, materials, and equipment have to be secured to begin any construction.

While I had the opportunity, I asked about a range of other buildings the group owns and plan to develop. Here’s what he had to say about various properties:

First Christian Church (211 West Fifth Avenue), which the group purchased in 2015 (and I wrote extensively about here) remains on the back-burner. Originally envisioned by the group as a possible restaurant and concert venue, the building may become those things, yet, but Mark said the “neighborhood has to marinate for a while.” In the meantime, The Point church has a lease that covers the next four years and Mark said they are “good caretakers” of the property, keeping it secure until they feel it is ready for development.

The Turn-Key Installation Building (601 East Jackson Avenue) was purchased by the group in July of 2021. Mark said the previous owner was looking at the increased difficulty he would have getting large trucks in and out just across the street from the northeast corner of the stadium project. He will continue to operate in the building for the next 18 months or so. Mark said they are waiting to see the development that surrounds the stadium before they make a decision on that building, which shares the block with a building recently purchased by Randy Boyd. He said he is imagining something that helps “extend the city 18 hours a day.”

1200 McCalla Avenue is home to a large building previously owned by the City of Knoxville. I first wrote about the address in May 2018 when the city offered a tour for interested parties, the press, and the public. Envisioned by the city as a Maker Space, it was eventually sold to Dewhirst Properties and will be developed as just that. Mark said they feel there is still a need for small-scale makers that hasn’t completely been filled and they hope to help in that regard. He said they hope to begin this summer determining a layout and making formal plans.

The original idea which led to the purchase was to develop a social club along the lines of Common House in Charlottesville (and other cities). After looking at current costs involved in bringing the concept to the site, Mark said is simply unaffordable at this time. That said, a smaller version of a similar idea is planned for the less expansive Southern Railway (here’s a look inside that building from early 2014).

Studies are currently underway to work through feasibility, but Mark hopes construction will begin later this year. The project would be a private membership social club for the community and may include a pool, outdoor games, events and more. Some events might be open to the public.

He said in that project and every project their team “wants the best options for our community.”