Want to Buy a Building? 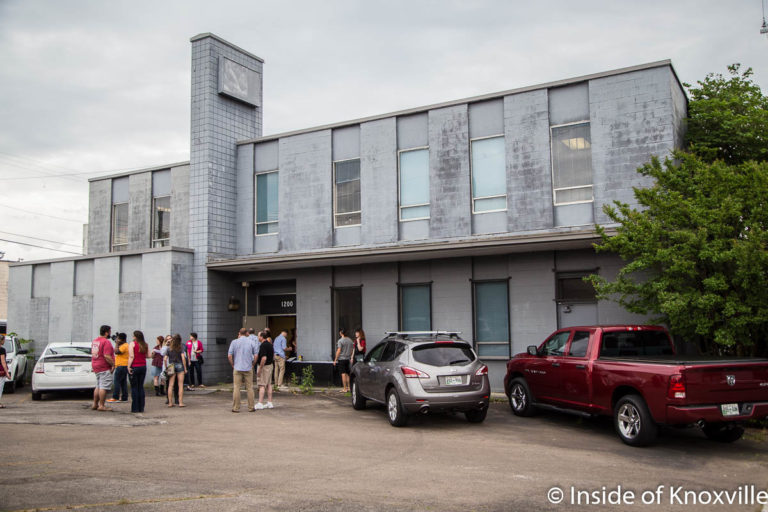 Last week the city and the Knoxville Entrepreneur Center hosted an open house for a property at 1200 McCalla Avenue. In the heart of the Magnolia Warehouse District. The property will soon be made available as the city puts out a “request for development.” The purpose of the open house was to expose the property to potential interested parties and to gather information regarding regarding what people felt should be placed on the RFD.

The KEC might seem like an odd co-host, but the focus of the event was the possibility of having the property re-developed as a possible maker space/ light manufacturing center. This could involved one person using the entire space or a group subletting portions of the building.

City staff are a bit vague on the age or original use of the building, but they’ve owned it since the 1970s. During that time, Parks and Recreation used it for some span and, ultimately, it was used by KPD. The bars visible on the second floor suggest it was used to house prisoners of some sort. The building is currently carved into many rooms, but could be easily opened up if the proposed use dictated a need for that.

It is currently zoned I-2, so industrial uses are acceptable, but that zoning also allows for up to 20% of the space to be used as retail. All of that could be moot when the Re-code Knoxville work is complete and becomes the new standard. In the meantime, and for the sake of proposals, that means that  somewhere around 1200 square feet would be available for retail out of the roughly 6,000 square feet.

It sits on .2 acres and includes a small parking lot on the front. It does not currently have either an elevator or a sprinkler system. As is, it has been appraised at $270,000, but the winning bid may not be that much. Criteria will include the amount offered, but the city is looking for someone with an appealing plan and that will be given more emphasis. The focus follows recommendations made last year when Smart Growth America visited and recommended the idea.

The projection given at the meeting was that the call for proposals will go out soon, with a ninety-day period for responses. The anticipation is that there may be groups which partner for a proposal and this will offer time for them to coordinate. After a proposal is selected, it will have to pass through City Council and be presented to the mayor’s office for final approval.

Additionally, a second round (the first one was recently completed) of city properties are being sold online and the DEADLINE IS NOON TODAY. Up for auction are thirty-three properties, many of which are vacant lots, that will be sold for less than the taxes owed. You can see photos, get details and place a bid here. If you have questions, contact Chris Ruberg at 1-865-215-4465.