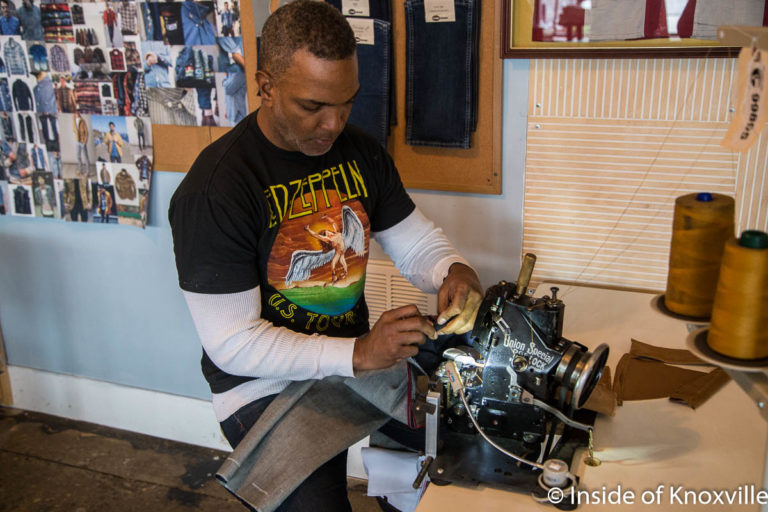 It’s been an emotional journey for Marcus Hall. After a run as the poster-boy for Knoxville success, filled with charm, good looks and a seemingly thriving business, all while being hailed for bringing denim manufacturing back to Knoxville, his arrest shocked the community. His prison sentence shocked him and forced him to confront his entire world-view. His journey back has not been easy.

We sat down on a recent afternoon inside his Marc Nelson Denim showroom to talk about how it all happened. I told him we would have to talk about it all and, at moments in our conversation, I wasn’t sure he would be able. But with pain sometimes crossing his face, he continued in soft tones to tell the story while encircled by the denim most of Knoxville knew  him for.

His family moved to Knoxville, from Sandusky, Ohio, before he was born. It was family he would later have in mind when he opened his business. His great-grandfather was an inspiration to him. L.C. Nelson always, “stressed never leaving the house without looking great. He taught me to ‘look the part.'”

East Knoxville was home in his early years, with family members and many others working at the Levi plant on Cherry Street. His older brother worked there. Marcus split his high school years between Central and Austin East and it was there that he took tailoring classes.

He got a close-up look at the devastation that can happen when a factory closes, taking away good paying jobs from a community which doesn’t have much to replace them. He pointed out that it wasn’t just the workers who hit hard times, it was the local diner, gas stations and other businesses they supported, which simply shut down. Many people who had been hard workers and had done well, ultimately, wound up broke, in jail or both. A community that struggled was further broken.

He eventually moved to California, where he worked for H.C.D. Denim helping develop their first line. He says returning to Knoxville was always on his mind, with the intention of starting a small-batch denim business. He longed to have a hands-on relationship with every step of production.

He made that move in November, 2011, and began working out of a garage. He did a trunk show in the Old City, worked with Fashion Week, and his work garnered a good response. He says it was an interesting time for him, as he left L.A. where skinny jeans were the thing and, “it didn’t catch on here for a long time, but now that’s all men want.”

The next year, he got a call from the people at Riot Printing. They had been printing his t-shirts from a leased space in the back of the building and they told him there was a space for lease in the bottom of the building for $500 a month. He took it immediately, feeling it was a great spot for his young business. He didn’t feel he needed a more prominent space because he didn’t intend to do direct retail.

In late 2014, when Curt Jenkins put the building up for sale, Marcus re-evaluated his disinterest in retail and decided to purchase the building and open a showroom. His profile increased rapidly. His product began showing up in businesses nationwide. His business was recognized by the Urban League and others. His trajectory seemed to be straight up. Until it wasn’t. In June 2015 it all came to an abrupt halt with his arrest on charges of running numbers and money laundering. His secret life suddenly became public.

He was driving on I-40 toward west Knoxville when an unmarked Knoxville Police car pulled him over. Three other unmarked  cars pulled up. He was told all his assets – including the car he was driving – were frozen. “My soul went out of my body and looked down.” They took his car and left him sitting beside the road.

What followed was a year of legal wrangling. The assets were mostly forfeited, including $5,000,000, cars and eighteen buildings. His biggest denim customer cancelled the account. Most of his staff left, but he kept afloat doing shows, still thinking that perhaps he wouldn’t go to prison. He watched his friend go before him.

In June of 2016 he was shocked to be sentenced to 33 months, as the judge cited a disrespect of the law, a charge that he acknowledges to have been true. As part of the plea deal, he was allowed to keep the building housing his business. July 13 he reported to the Montgomery Federal Prison Camp.

He applied for and was allowed to enter a special rehabilitation program there that could shorten his sentence. The program was severe and many people didn’t complete it – at which point their entire sentence was enforced. The inmates in the program were accountable to each other regarding every aspect of their behavior. He’d been abusing alcohol and cocaine and says it was, “very humbling to admit to someone that you have a drug problem. If you are doing it, it’s a problem. Substance abuse was part of the lifestyle.”

In one respect, he says prison was a relief from the pressure. For a full year he had fought to protect his family, fought in court and struggled to keep Marc Nelson Denim from going under. He says in prison, the outside noise stopped. He was physically and emotionally exhausted.

He says now, “It was never my intention to go into the illegal gambling business to underwrite the denim business.” But he did so. In 2008, an old friend offered him the option to buy into his numbers business. It’s a scheme that involved placing illegal bets on a number.

The numbers used to determine the winners were those selected in the Illinois (legal) lottery. Marcus gave seed money to start the business and then returned to Knoxville in 2011 when the work grew to the point that he was needed here. At its peak, the IRS estimated the business brought in $90,000 a week.

Of that time, he said:

“The greed takes over. The money is too good. It’s (running numbers) a part of black, poor communities. I had never seen anyone go to jail and I never thought I would go. I felt that me giving back – paying light bills, giving to the Love Kitchen . . . offset the bad. In hindsight, that doesn’t make it right.

I thought I would make a certain amount and quit, but I made that several times over. It’s a blessing that the IRS stopped it. It was cash and our lives could have been in danger. My house was broken into. It was scary.

I took the numbers money and played at denim. Now I see things that could benefit the business. I don’t have the option of not selling blue jeans.

In the end, he served thirteen months of his original thirty-three month sentence and was released into a half-way house in August, 2017, where he remained for the next six months. On the second day of March this year, he was released from home incarceration.

The entire process has made him take a hard look at his motivations and what really matters.

I spent years chasing dollars. I thought, ‘what was the goal? Family matters. It was my pressure, not from them. I missed my daughter’s freshman year in high school, her first basketball game. Now I want to make a living, do something I enjoy and spend time with my family. I want my children to be proud of me.

One irony, he observes, is that, prior to his arrest, he felt the business had turned a corner and it could have moved forward successfully. As the business languished during the subsequent year in court and the year in prison, he became less certain it could continue. During his house arrest at the end of last year, he was allowed to leave during the day for work and he set sales targets for November and December. If he reached them, he felt it was a sign he could continue and be successful.

I was able to reach the targets. I had never focused so much. I started calling people. I had inventory and materials. Now I have to sell. The drive to sell is there (like it wasn’t before). I am humbled that without selling blue jeans, I don’t eat.

He’s shifted his business model significantly in the absence of outside financial resources. He’s not wholesaling and he doesn’t have the budget to attend trade shows. He’s focusing on the store and he’s shifted the merchandise he carries. He dropped his women’s line and noted that direct sales means less product is moved, but the margins are better. He plans to focus on the store and e-commerce for the next two years.

He’s offering only Marc Nelson Denim – no other brands – and it is produced on site by him and his staff. He’ll also have other product lines, such as Cole Hahn shoes and accessories, shirts and ties by Gitman Brothers and a men’s cosmetic line from Rainwater Farm.

He says it is encouraging to see how Knoxville has grown in the time since his arrest. He feels he can be successful with an honest business and he means to give it his best effort. The showroom for Marc Nelson Denim is located at 700 E. Depot Avenue and the store hours are currently 10:00 AM – 6:00 PM, Monday through Friday and 10:00 AM – 3:00 PM on Saturday.