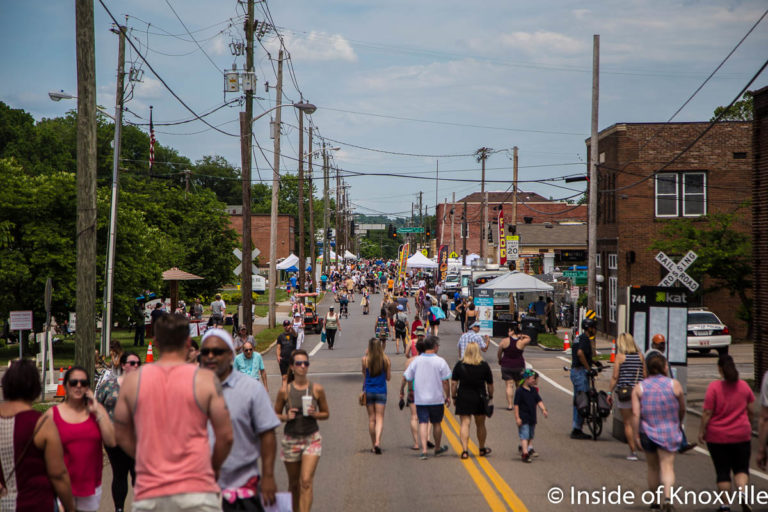 It’s one of those days in the city that goes a long way toward encapsulating who we are. There are events every day, of course, and all of them combined create a narrative that shows our values and interests. This one seemed to get at the heart of who we are – from cycling to boating, neighbors and friends greeting each other on the street, to a conclusion in the old city with friends new and old joining for a meal in the street along with the longest table most of us had ever seen.

It started in the afternoon with Open Streets in south Knoxville along Sevier Avenue and wrapping around into Suttree Landing Park. The access to the park added a touch the others haven’t, by including the river and some of the best views of the city. The river became almost an extension of the event as people traversed the water in a startling number of ways. I saw the riverboat, a pontoon boat, a speedboat, sea-doos, kayaks and paddle boards. It’s the most active I’d ever seen our waterfront.

The park itself is a beautiful space with a very nice playground for the children and benches along the river for simply sitting and contemplating the river (cue “Watching the River Flow”). A nice river walk and large green spaces just about scream for more use than it has gotten, so far. In that regard, look for a big announcement within the week about a major event to be staged there later this summer. I’m excited. With the backdrop of the skyline, it’s going to be stunning.

Activities were set up all along the route as is normal for Open Streets, including in the park. I was there for the first two of the four hours and the crowd built steadily through the duration of my stay. A bit thin, at first, by three the crowds were growing and by four, sections of the street were difficult to pass on a bike.

This was the first time I rode my bike to an Open Streets event, and I have to say, it’s a fun way to go, offering the option of disembarking and walking around a bit, which I did. The range of possible modes of land mobility were as on display as those on the river. People biked, of course, but some pulled children or pets in small carts. People danced, rode grown-up tricycles, skated, skate-boarded and many people simply walked. One of the differences this time around was that a number of people rode the Pace bikes. They weren’t available in prior Open Streets events.

As always with these events, I noticed businesses and buildings I’d missed before. It was many people’s first exposure to South Coast Pizza, and they seemed to be doing a big business. I’d not noticed Echelon Bikes, beside Honey Bee Coffee. I’ll have to look into them and, hopefully, bring you a write-up soon. They offered a popular shaded resting spot (and beer!) and were also busy showing bikes and doing repairs. It’s a very good addition to the street.

In addition to the informational booths set up along the way, groups led others in or performed a range of activities. Martial arts, acting, intricate modern dance routines, bicycle and other types of obstacle courses, belly dancing, machine work outs, acting and an array of other activities were sprinkled about the route, which led from Council Place through the park. There was even an obstacle course for pets and a band cranking out tunes for good measure.

Mostly, it was Open Streets doing what it does: Getting people outside, active and connecting with one another. For a modern idea, it’s pretty simple and old-fashioned at its core. It helps us re-claim the vast real estate we normally cede to cars and puts on display two of our core ideas of ourselves as a city: connectivity and active culture.

I left a bit after 4:00 PM on my bike to head back to the center city for another event which exemplifies other aspects of who we are. Benefiting Dream Bikes, a long-table supper was held in the closed-down Old City block of Central. All in one event, Knoxville’s heart for helping others – as Dream Bikes does in multiple ways – as well as active culture and our emerging culinary culture was on full display. The event also connects friends and helps develop new ones as everyone is seated at a beautiful, seemingly endless table.

A number of our finest chefs and other culinary professionals were on display in the dinner held in the middle of the street. Mother’s Daughter Breads, Paysan Breads, Oli Bea, Crown and Goose, Lonesome Dove and Rebel Kitchen. From the breads through the “bicycle tire” desserts, the food was a great display of the amazing culinary work currently happening in the city.

The event, hosted by Dream Bikes and emceed by David Dewhirst sold out. Pre-dinner cocktails were provided by Post Modern Spirits and the Gratitude Bar. Dishes served started with bread, along with spreads from the various participating restaurants, and ran through a salad course, a fish course (the vegetarian replacement was a stunning grilled mushroom dish which may have been the dish of the night), a huge helping of lamb and a fun chocolate dessert.

These kinds of dinners have become more common at various restaurants, and now we’ve had a couple in the street. They trend toward the expensive, but often, as in this case, benefit a good cause. They also bring together a community whose cohesion and connectivity is a strength and value we need to continually nurture. As development continues to expand and as people continue to discover Knoxville and the city grows, we’ll have to work to keep that component of what makes us special.

As always, I have far more photographs of these events than I can reasonably share in an article, so watch the Inside of Knoxville Facebook Page for the full lot a bit later on.