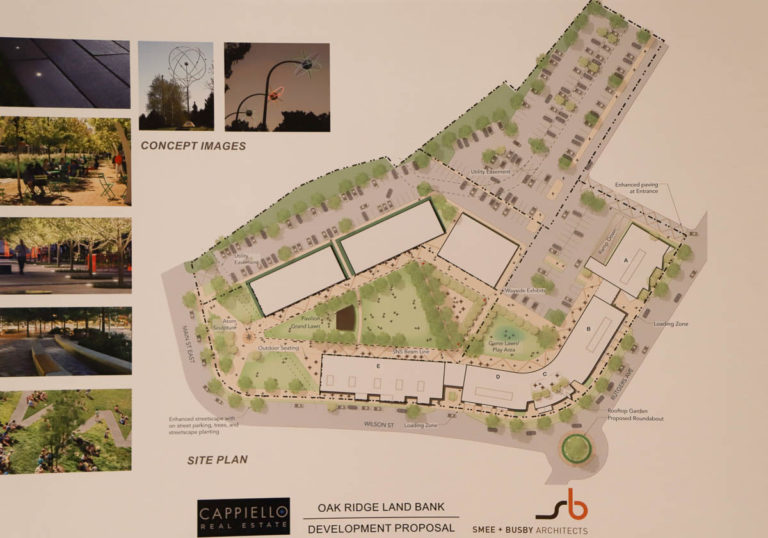 It’s been almost seven months since I reported on the proposal to build a center city in Oak Ridge. The city, which unlike most cities in the world, did not develop organically. A hurriedly designed town was constructed to support war efforts in World War II, specifically, to help develop the atomic bomb. While one historic node centered at Jackson Square has survived and sometimes thrived, it has never developed as a residential, retail, and civic center for the city.

Several plans to build a more traditional downtown or city center have surfaced over the years. For various reasons none of those have been successful. The current master plan — to build a downtown from scratch along Wilson Avenue — was met with great interest by readers here. It was also met with some skepticism. The Oak Ridge Landbank, a group formed to assimilate the land needed for this project, has acquired 6.5 acres.

Requests for Proposals (RFPs) were sent out after my last article and two proposals have risen to the top. They were revealed publicly for the first-time last week and each feature developers who have completed projects in Knoxville. Most recently, Josh and Jessica Wright completed The Overlook on West Hill Avenue. Though the intent was to select one initial proposal, the two proposals were selected as the developers coordinated to form a cohesive beginning for the longer-term plans. They will be voted on in coming weeks, with approval seeming likely, and construction to begin soon after.

The two proposals together would purchase 3.5 acres of the 6.5 total. The proceeds would pay the land bank back for their initial investment. If built, the two projects would provide about 57,000 square feet of (mostly ground level) commercial space, with hopes for restaurants, entertainment venues, and retail. Additionally, 60 – 120 new residential units would be developed. Parking is also included behind the buildings and, potentially, under the buildings.

Phase four of the Wright project holds the promise to get even more interesting. Depending on demand for the condos (all their residential units would be sold), the fourth phase could include anywhere from four to eleven stories. At the top end, this would be one of Oak Ridge’s tallest buildings, as building upward has never been a point of emphasis in the city. Depending on its height, the fourth phase could produce anywhere from twelve to forty-four residences.

The housing provided in the Wright proposal is targeted at higher-income workers or families. A long-held concern in Oak Ridge is that many of the managers and high-earners at the plants work in Oak Ridge, but live in west Knoxville, and this would offer a potential answer to some of that economic loss to the city. He projects the cost to purchasers per square foot for the completed condos to be in the upper $300 per square foot range.

He said the focus of their work is to develop communities in buildings that last. He said the last thing they want to do is have people enter a corridor into a building and have no way to interact with each other and with the surrounding environment. He pointed out that the area enclosed between the two developer’s projects it larger than Market Square and like other famous public squares. The units he is proposing would address the public square.

The plan put forward by developer and owner Tony Cappiello, along with Scott Busby of Smee Busby Architects, took a different focus. First, it is significantly larger than the first three phases of the Wright plan. Whereas the Wright plan includes 47,200 square feet (significantly more if the fourth phase is included), the Cappiello plan includes 38,012 square feet of commercial space and 61,721 square feet of residential space, for a total 99,733 square feet. The Cappiello plan also includes parking under the buildings, while requesting additional surface lots behind them.

Mr. Cappiello, whose family has been in Oak Ridge since 1943, pointed out that Jackson Square used to be a vibrant center for the city. His father owned a restaurant there, and a bowling alley and a billiards business. He’d like to replicate some of that vibrancy and appeal to young people that is missing in modern Oak Ridge. His project would include both a potential bowling alley, as well as a brewery. His residential component is likely to be a mix of short and long-term rental.

He said the other retail in his project will emphasize “sole proprietor” business. He pointed out that his company’s emphasis has always been to bring something to the community that hasn’t been available before. Scott Busby pointed out that their project includes large amounts of outdoor seating and space for businesses focusing on the square formed in the center.

Both presentations included design elements that tie into Oak Ridge and its origins. Both projects emphasized modern design in keeping with the technology and cutting-edge businesses that operate in the city. Like the Wright project, the Cappiello project featured balconies facing the center of the project, with an additional emphasis on drawing others in.

After the meeting, the ORLB will consider how to move forward. They may make a motion to accept the contracts as quickly as their next meeting, which is March 15. If approval is given, contracts will be negotiated and signed. A due diligence period will follow and upon closing, construction can begin.