The Sunsphere Observation Deck Reopens With a Whole New Look

The Sunsphere is doubtless the most distinguishing characteristic of the Knoxville skyline. Along with the blade sign on the front of the Tennessee Theatre, it has to be one of the two most photographed structures in the city. It is also one of our most visited spots. In the three months leading up to the pandemic, visits were monitored and were found to average over 6,000 per month. While it may not be as famous, it joins the Eiffel Tower (1889, 1,063 feet) and the Space Needle (1962, 605 feet) as iconic structures built as part of World’s Fair celebrations.

At 266 feet (26 stories), it is one of our tallest structures and offers the best publicly accessible views in the city. At least it offered those views until March 2020 when it closed due to concerns regarding the pandemic. It has remained closed for two years. Now managed by Visit Knoxville, the observation deck will once again open to the public starting next week.

Prior to its closure, plans were underway for a revamping of the observation deck. Concern had grown that there were no funds dedicated to the maintenance of the aging structure. In an effort to ensure its future, a Sunsphere Fund was established. During the closure, PBA and Visit Knoxville utilized the down time to revamp the observation deck, transforming it into a small museum dedicated to the history of the World’s Fair, as well as leveraging its views to promote other activities in the city.

Mayor Kincannon, commenting on the new design said, “I get asked all the time, ‘What’s in the Sunsphere? Can I go inside?’ So, I am thrilled to see this iconic landmark reopen to the public. This newly revamped space will help many of us relive the excitement from 1982, while at the same time help younger generations learn more about the history that has shaped our great City.” 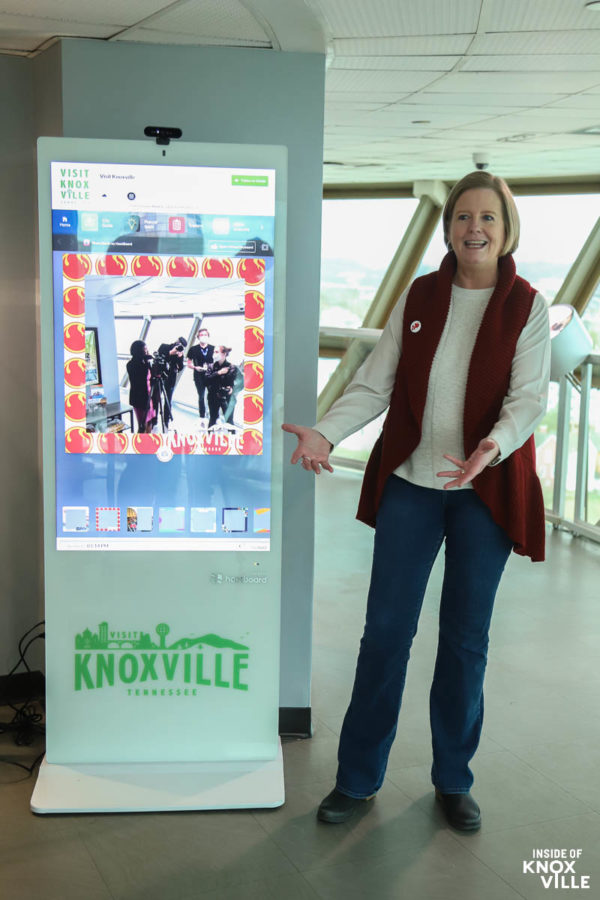 What you’ll find in the newly designed space is a tribute to the World’s Fair, currently celebrating its 40th anniversary. The walls are lined with colorful illustrations of and details about what went into making the fair happen and about the Sunsphere itself, which was designed by local architects Community Tectonics Architects, Inc., and constructed by local Rentenbach Constructors (now The Christman Company). Everything has been replaced from baseboards to ceiling tiles.

You’ll also find memorabilia provided by local collector Chris Ford(and owner of both Sweet P’s Barbecue and the trademark World’s Fair logo), Bruce McCamish, and others. An art gallery inspired by and of the Sunsphere is included as well as exclusive licensed Sunsphere souvenirs. The deck will also be always staffed with a guide to answer questions about the Sunsphere or the 1982 World’s Fair. In the background will be a curated playlist of music from the year of the fair.

Kim Bumpas, President of Visit Knoxville, said, “This has been a long-awaited reopening and we are looking forward to sharing our excitement with the community. The Sunsphere is an integral part of Knoxville’s skyline, our history, and cherished memories going back decades. We envision a visit to the Sunsphere’s Observation Deck to be a key experience here – a place for visitors and locals alike to make new memories in Knoxville while also contributing to future enhancements to the attraction.”

While touring, I noticed a photograph of the Rubik’s Cube that was featured in the fair. Kim Bumpas assured all that it is safe and sound and has a permanent home in the Convention Center. She also said of the new plan, “If we want this structure to live forever, which is what it was designed to do, we have to protect it. Charging admission is the only way to do that.”

Technology is also featured in the new design including a touchscreen (did you know touchscreen technology debuted at the 1982 World’s Fair?) that will offer options to view performances from the fair, with footage provided by the East Tennessee History Center. You’ll also be able to interact with a map of the fair on the touch screen. Visitors can also have a photo taken with various World’s Fair frames and email it to themselves on the spot with another piece of stationary technology (You’ll see the small gaggle of reporters in the photo of this if you look closely).

The newly outfitted observation deck will no longer be free, as the model has proven unsustainable. Children aged twelve and under will continue to be free, while others will be charged $5. The fee and proceeds from any sales of the merchandise will go directly into the Sunsphere Fund. There will be free events and special days in which admission will be waived.

There are long-term plans to make the Sunsphere an even more appealing destination, but those enhancements will require funding and the admission fee and merchandise are a first step toward making those plans become a reality.

The observation deck will be open six days a week. Initial hours are 10am-5pm Tuesday through Friday, 9am-5pm on Saturday and Sunday, 12pm to 4pm. Monday the deck will be closed. The group hopes to expand to nighttime hours as funding is increased. Tickets to visit the Sunsphere (and reserve a time) may be found here. More information on the World’s Fair 40th anniversary events may be found here and donations to the fund may be found here. Partnership opportunities are also available.