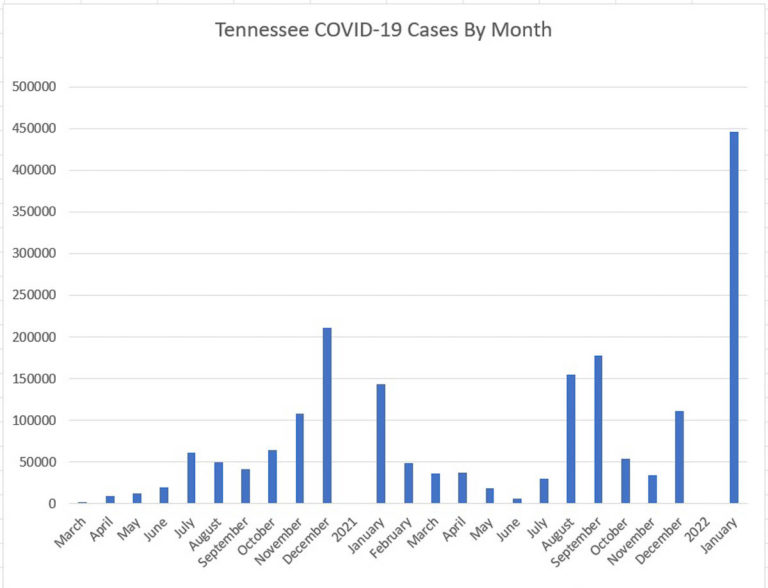 As a reminder, I started these charts quite a while back after a reader suggested that looking so intensely at daily numbers sometimes obscured the larger view. And it is the larger view I’m presenting here, simply to offer as clear a picture of where we’ve been as a state and a county through the pandemic.

Even though it is my intention to present a clear picture, it is not an entirely accurate one. I’m not sure it’s possible to give a precise number count to every month, but I’m certain I cannot do it. The state and the county are constantly adjusting numbers. Cases and deaths are moved to different months, removed entirely, or added as a major dump without clear attribution to a month.

This is my best attempt and I think the flow of the data gives an accurate impression, though my total numbers are lower than those currently reported by the state and county. I think the more recent months are likely the most accurate and less impacted by historical corrections.

The enormity of the Omicron wave is clear in both state and county data. From November to December, cases at the state level more than tripled. From December to January, it quadrupled. By the end of the month, with nearly 450,000 cases, the month saw more than double the number of cases in the previous record month of December 2020 (211,000).

It illustrates the fact clearly, that we can have a 50% drop in cases for February and still be above our worst month ever, outside January 2022. To simply return to November levels, which were not particularly low, we’ll have to see about a 78% drop in cases. A concern is that we didn’t go very low between these last two surges and the surges came rapidly one behind the other. How low can we get cases to drop this time? Will there be another surge and if so, how long will we enjoy a reprieve before it hits?

The best news with this surge was that it was less deadly. While December and January death levels were among some of the worst we’ve seen, as a proportion of cases, they were a smaller percentage. While cases rose far beyond record levels, deaths did not reach record levels. While this variant may have been less potent, the lion’s share of credit must go to vaccines. In large part, people who were vaccinated, while getting the virus at a high rate, most didn’t die from the illness.

The pattern of cases in Knox County was similar, though a bit different. While case numbers at the state level tripled from November to December, locally those numbers doubled. It’s a significant difference and reflects the fact that each wave has moved across Tennessee from the west to the east. Any apparent advantage we thought we might have in December was swept away by the 713% increase in cases from December to January. We roughly doubled our worst previous month for cases.

Deaths in Knox County also followed a slightly different pattern than those in the state and February deaths will also likely diverge. The delay in the surge in cases in east Tennessee versus the rest of the state meant that our December death totals did not surge to the degree seen in state-level reporting. January, however, saw roughly a doubling in deaths, from 45 in December to 89 in January.

At roughly 2.9 deaths a day, it was the fourth highest Knox County death toll for a single month in the pandemic. February started with a higher pace, though, hopefully, declining cases will produce fewer deaths in the second half of the month. For the first five days of February (all that we have data for), fourteen deaths or 2.8 deaths a day have been reported.

So, where do we go from here? Some experts have speculated this may be the last great surge. Is that wishful thinking? We certainly hope the next variant is weaker, but what if it is stronger? Can our medical system continue to fight more barrages from the virus without a collapse? Can our economy find a way to work through the virus?

Clearly Americans are not going to get vaccinated in significantly larger numbers and masks are quickly disappearing from the larger culture. Without further mitigation efforts, we are left to simply await the next move from the virus. Here’s hoping that the case numbers continue to plummet and that we are nearing the end of the worst we’ll see from this pandemic.