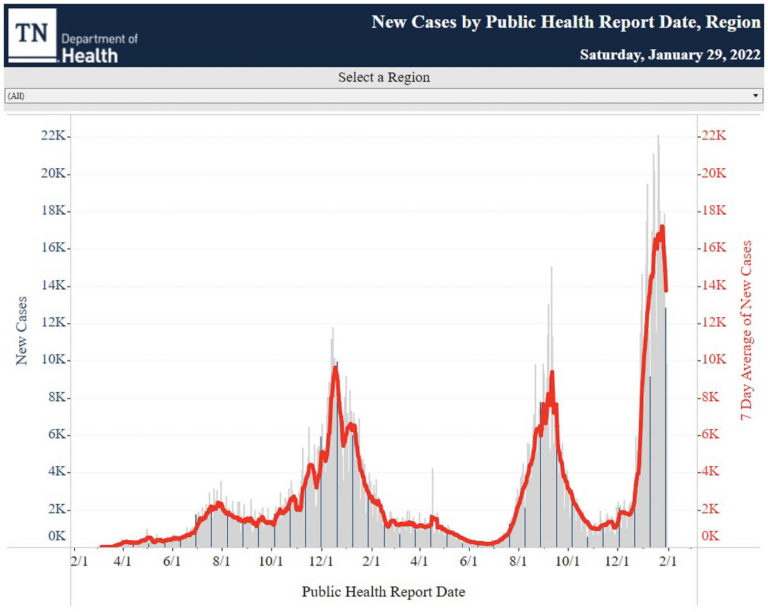 This is a tricky time to write about or to process information regarding COVID-19. On the one hand, case rates are dropping globally and, in the U.S., Many people in the U.S. and locally have determined that it’s here and there’s nothing we can do about it, so they behave as if there is no great risk. Besides, Omicron is mild, particularly if you are vaccinated, so what if I get a cold? Right?

Contrasting to all the above, Omicron has so swept the country, our state, and our county, that a massive drop in cases would still see our numbers remain very high. Cases in the U.S. have dropped nearly 50% but remain above the peak of the previous surge. Deaths in the world, U.S., Tennessee, and Knox County continue to rise or remain high. While a smaller percentage of people who contract the disease die, the sheer magnitude of cases is producing a death rate rivaling previous surges.

The bottom line for this week is that things are not that much better, if at all, in our state and county. When they do improve — which I think could be very soon — even if rates plummet massively, we’ll still have a very high rate of transmission. More people died of COVID in Knox County last week than in most prior months of the pandemic. While odds are you will not die if you get it, you will miss work, you may infect more vulnerable friends and family, and you may (as is the case with several of my friends) experience strange symptoms for months afterward.

Now is not the time to act as if the virus doesn’t exist. Please continue to be careful or resume doing so if you’ve stopped. Let’s hope that a few weeks from now the situation looks much better as spring begins to break.

Over the last week, about 21.8 million new cases of COVID-19 have been reported across the world, a welcome decrease of 7% from the previous week. Daily cases are now running about 3.1 million per day, down from last week’s pandemic record of 3.3 million. The current remains far above the peaks of any of the previous surges, the worst of which topped out at about 828,000 new cases per day. The 73.5 million global active cases top last week’s record 69.9 million. There have been about 384 million confirmed cases since the beginning of the pandemic.

Deaths, which lag cases, continue to rise, with a 14% increase this week to 67.7 thousand, for an average of 9,671 deaths per day. The current death rate is about 65.1% of the peak death rate reached in January 2021. Over 5.7 million people have died of COVID-19 since the beginning of the pandemic.

Since the beginning of the pandemic, the U.S. leads the world in total cases with just over 76.6 million and in total deaths with over 915,000.

The United States is also leading the world in new cases, with an average of about 425,000 new cases per day, which reflects a drop of 44% over the last two weeks. There are currently about 29 million active cases in the U.S., a number that both leads the world and represents the most active cases reported in the U.S. since the beginning of the pandemic.

The U.S. has a 64% vaccination rate, ranking 60th in the world (up one from last week). The U.S. ranks 16th in per capita cases in the world (among countries with at least 1 million in population) and 15th in per capita deaths since the beginning of the pandemic (up one — our pandemic death rate surpassed Armenia this week).

New case numbers fell off their pandemic highs last week, with an average of 13,760 new cases each day, down from 16,968 the previous week. The 22,113 cases (number adjusted by the state since last report) reported by the state on January 19 may remain our pandemic record. The most recent day reported (1/29) included less than 10,000 cases for the day the first time in nearly three weeks that had been the case for a single day.

About 58,000 vaccinations were given over the last week, down from 61,000 the week before. Tennessee’s 52.3% vaccination rate earned 44th best out of the 50 states this week, the same as last week.

Bottom line locally: We are starting to see improvement in the number of new cases reported each day and active case numbers have declined. That said, Knox County, even with the reduced case numbers, the county currently has about 176 cases per 100,000, which is 17.6 times higher than the threshold for low spread. Hospitalizations have not declined, and deaths are up.

Over the seven days included in this data, the KCHD reported 5,878 6,680 new cases, for a daily average of 839 per day, down 12% from the week before. Prior to this surge, the largest number of cases reported in a single day was 933 reported on September 6, 2021. We exceeded that three times in this reporting period. the record of 1,423 set on January 20 appears likely to be the peak single-day number for this surge.

Active cases numbers dropped this week for the first time in weeks, falling to 13,809, down by 5.6%. Just two weeks ago, the current number would have been a pandemic record. After weeks of massive increases, the drop is very significant, though small.

An additional thirty COVID-19 deaths were reported in the county in the week ending January 29, up from twenty reported for the previous seven-day period. This is one of the deadliest weeks, if not the deadliest week of the pandemic in Knox County, with nearly four people dying of the illness each day. Of the 30 deaths added today, on person was age 18-44, seven were age 45-64, eight were age 65-74, and fourteen were 75 or older.

Test demand is at a pandemic high, with nearly 15,000 tests reported for this seven-day period. The state reports a 44.9% positive test rate as of the end of last week for Knox County, down from 46.6% the previous week. 58.74% of Knox County residents are fully vaccinated, up from 58.46% last week.

After an up-and-down first week and a half, UTK is reporting 144 active cases, down from 164 a week ago. In Knox County Schools, numbers rose in the first week back from a full week off, starting at 147 known cases on Monday and going up each day to end the week with 358. In the first three days this week, numbers have gone from 195 on Monday, to 247 on Tuesday, and a slightly better 239 on Wednesday.