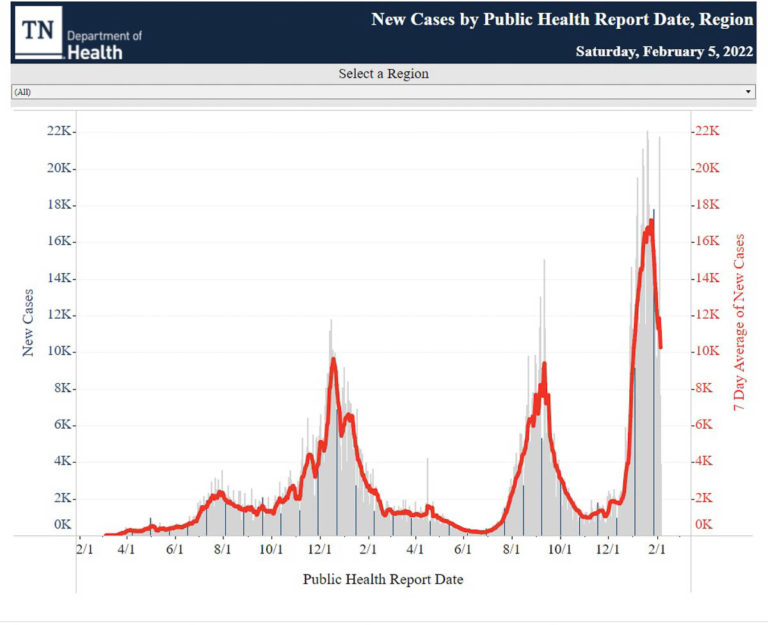 Welcome to the weekly update. Reporting on COVID-19 and understanding current risk levels continues to be dicey. While we’re beginning to see improvement in new cases — particularly nationally — and some indications of improvements on a more local level, the rates of spread, hospitalizations, and deaths remain high.

So, the good news is that the situation is improving, but the bad news is we have a long way to go. There is also the issue that this report at the state and local level only includes numbers that are five days old as you read them.

I also think it is worth taking a moment to acknowledge the reported the first COVID-19 related death of a child in Knox County. Reported by her parents via Facebook, Adalyn Rita Graviss, age 7, and a student at Rocky Hill Elementary School, died on Tuesday.

According to her mother, a recent COVID-19 infection triggered a severe autoimmune reaction causing the young girl to be hospitalized briefly locally, then transferred to Vanderbilt Hospital, where she soon died. COVID-19 rarely produces severe illness in children, but it isn’t always the case. There are currently ten COVID-positive children on ventilators in Tennessee.

Over the last week, about 18.4 million new cases of COVID-19 have been reported across the world, a welcome decrease of 16% from the previous week. Daily cases are now running about 2.6 million per day, down from last weeks’ 3.1 million. The current rate remains about 200% above the peaks of any of the previous surges, the worst of which topped out at about 828,000 new cases per day. The 74.6 million active cases globally top last week’s record 73.5 million. There have been about 402.2 million confirmed cases since the beginning of the pandemic.

Deaths, which lag cases, continue to rise, with a 7% increase this week to 74.1 thousand, for an average of 10,582 deaths per day. The current death rate is about 71.3% of the peak death rate reached in January 2021. About 5.8 million people have died of COVID-19 since the beginning of the pandemic.

As it has from very early in the pandemic, the U.S. leads the world in cases with nearly 78.6 million and in total deaths with over 932,000.

The United States is also leading the world in new cases, with an average of about 240,540 new cases per day, which reflects a drop of 63% over the last two weeks. With this drop, new daily case rates are slightly below their pre-Omicron high reported in January 2021. There are currently about 28.8 million active cases in the U.S., a number that leads the world, but represents a slight drop from last week’s 29 million active cases, a pandemic record.

New case numbers continue to drop from the pandemic highs reached two weeks prior to the current report (which only goes through 2/5). The state reports an average of 10,264 new cases each day, down 25.4% from 13,760 the previous week. Despite the major decline, the state reported 21,772 cases on February 3, the second highest daily total ever, behind the 22,109 cases reported by the state on January 19.

According to the new state data published yesterday, an average of 65 Tennesseans died each day from COVID-19 last week, up four from the week before. Hospitalizations decreased by a net of 51 each day last week, as the decline picks up pace. Just over 20,400 tests per day were reported last week, down 20% from the previous week and the positivity rate of 32.05% continued improvement from the 37.27% from the previous week. The goal is 5%.

Hospital data was only updated to 2/1 and showed 3,332 COVID-positive patients hospitalized in Tennessee, relatively unchanged from the 3,343 reported last week. More recent data (through the 5th) indicates the number of COVID-positive patients is dropping at a rate of 51 per day, so a significant decline should be obvious in the next set of numbers.

About 42,000 vaccinations were given over the last week, down from 58,000 the week before. Tennessee’s 52.4% vaccination rate earned 45th best out of the 50 states this week, down a spot from last week. Oddly, vaccinations are reported every day, unlike any other COVID-19 related data in the state.

After seeing local numbers begin to improve with the previous report, that improvement became more pronounced with the current (remember “current” means through last Saturday) numbers. What seems critical is for people to understand that our current, much improved, numbers would have been a pandemic record just two weeks earlier. Our rate of spread continues to be extremely high, as do our hospitalization and death rates.

Over the seven days included in this data, the KCHD reported 3,523 confirmed new cases, for a daily average of 503 per day, down 40% from the week before. In the last four reporting periods (in order) we topped 1,000 cases in a single day three times, three times, once, and none in this reporting period. The highest single day total reported last week was 754. Prior to this surge, the largest number of cases reported in a single day was 933 reported on September 6, 2021. The record of 1,423 set on January 20 appears likely to be the peak single-day number for this surge and, hopefully, for the duration of the pandemic.

It is still important to keep in mind a couple of other variables. First, this is the first wave of COVID-19 in which home tests are being widely used. The results of these tests are often not reported, so we know that there are more cases than have been confirmed. Additionally, I’ve chosen not to include probable cases in the main number that I use, but they, particularly at this point, are likely all true cases (the state includes them in their main number). Of that group, there were an additional 2,124 reported in this period, or 303 per day.

After setting a pandemic record just two weeks ago, active cases have continued to drop. Two weeks ago, the number was 14,630. Last week it dropped slightly to 13,809. This week, numbers plummeted to 9,909. Again, perspective here is imperative: Just three weeks ago this would have been a new record high for active cases, nearly 50% higher than any other week. In other words, there is still a very large number of COVID-19 positive people walking around in our county (though hopefully many are quarantining).

There are 129 patients in ICUs (down from 136 the previous week) and 85 on ventilators (up from 80 the previous week). If we’ve seen the peak for hospitalizations in this surge, we can be pleased that the peak was lower than that in the last surge, even though case numbers were far higher.

An additional twenty-four COVID-19 deaths were reported in the county in the week ending February 5, down six from the previous seven-day period. Of the 24 deaths added today, five people were between the ages of 45-64, five were age 65-74, and fourteen were 75 or older. In an interesting shift, the recent deaths have once more been shifted to older persons, in similar numbers to the early deaths.

After an up-and-down start, UTK is reporting 90 active cases, down from 144 a week ago. The Knox County Schools have also reported up-and-down numbers, but are currently reporting 139 known cases, down significantly from 239 reported one week earlier.