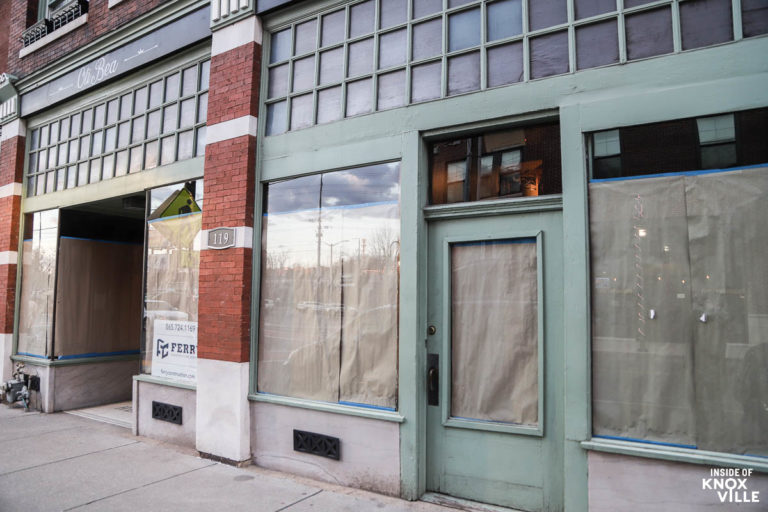 Brooke and Dan Phillips, along with business partner Justin Mangelsdorf, have taken a lease at 119 South Central Street, the original location of Oli Bea, with the intention of opening a cigar lounge and specialty bourbon bar. Alchemy Lounge and Cigar Bar will be the products of many months of preparation and the answer to dreams the couple has harbored for years. They hope to have it all come to fruition with an opening in May.

Brooke grew up in Knoxville, though the couple lived in Florida for thirteen years, returning in 2013. She said they have loved city revitalization and continued to hear from her father how downtown had turned around but had no intention of returning. They did return, with their four children in tow and got off to a rocky start with a job falling through.

She started Brooke Phillips Designs and began making relationships downtown. Brooke said, “We just think Knoxville’s magical. I can’t imagine living or being anywhere else. Owning a business is something we’ve always wanted to do together. Dan had a gym in Florida, my grandfather has a fifty-year-old business in Strawberry Plains.” She said entrepreneurship runs throughout the family.

“Both Dan’s Dad and mine were cigar and pipe smokers, so it’s really nostalgic for me.” She had initially looked at another space for a speakeasy with a humidor, but when that didn’t work out, they found the current space. The concept shifted to “what it should actually be.” They said they love the location.

The front room (which you can get a picture of from the photos here of their recent pop-up) will feature furniture style seating with a mantle. Brooke said to imagine an old-style hunting lodge and you start to get the feel for what they are planning. “The furniture is buffalo leather, and lots of rich textures . . .” She later added, “I want people to feel they have been transported to another time, another place, another country. We have a some really creative business owners here who have created unique experiences and I love being a part of this team.” Dan added, “She creates spaces where people want to stay, where you walk in and you exhale.”

Chandeliers will hang from the ceiling on both sides. The bar back will be constructed using beams from the Oli Bea space. A massive piece of marble will be placed as the bar top. “It seems so pretentious, but it will feel so comfortable. It’s the crown jewel” Behind the bar will be the lone, framed television. “It will look like art unless you turn it on.” It won’t be a point of emphasis, but they want it to “feel like a living room.”

One of the real challenges to prepare this space for the new use, was installing appropriate HVAC and ventilation so that smoke is limited. They want non-smokers to enjoy the business and to make it more appealing for everyone, the went to great lengths to install smoke mitigation. They shifted the duct work, so the air-returns are up toward the high ceilings, in order to lift it off the floor. There are dedicated units for each room. The engineering allows the room to feel smoke-free. Each room will also have “smoke eaters,” that constantly ionizes and filters the air.

The smaller side room will also feature furniture style seating and a similar décor but will also include “men’s retail and paraphernalia like cutters, lighters, pipe tobaccos.” She said it will also include men’s grooming products and other items for men, outside of apparel. A host will be located in that room to take care of sales and members. Memberships will be offered to include benefits such as dedicated humidor lockers, private hours, and more. The bay windows on both sides will be filled with nice leather booths.

There will be a full bar offering cocktails, specializing in bourbon-forward beverages. They also hope to have their own specialty bourbon. In addition to specialty bourbons, wine will be available, some sold by the glass and other more elevated bottles ($150 and up) offered from a small, curated collection. They will host tastings and other small events. Charcuterie from Hen + Hoc will be offered as a food option. A large walk-in humidor with brick floors and Spanish cedar walls will be located in the back.

An emphasis will be on pairings, such as specific ports with particular cigars. The host will assist with pairings. The point-of-sale system will also help with pairings. All the inventory will be in the system with pairings, so if you pick a bottle of wine, cigars would automatically be suggested and the same would be true in the reverse for both bourbons and wines.

Service will also be a major point of emphasis. Dan said, “We will be catering to people’s needs. They will be served well. They are going to be taken care of . . . There will be a server in each room, a host, two bartenders, plus an owner. We want people to feel known, acknowledged and taken care of. It’s going to be one of those places where people know your name.” With a seating capacity of less than fifty, the staff-to-customer ratio will be very high.

The buzz has started already, with a Facebook group dedicated to cigars discussing it for months. A pairing social was recently held to gauge interest. Brooke decorated the space to look as much like the new place will look (while staged in a construction zone). They invited about fifteen people and word spread and the place was packed.

Initial hours are planned for 2:00 pm to 10:00 pm, except for Friday and Saturday when they will close at 11:00 pm. Sunday hours will be noon – 5:00 pm. Sunday evenings will likely be for members only or for pairing socials and other events. It is possible retail hours could be extended into morning hours.

While the current plans haven’t been brought to completion, the couple already has hopes of expanding and a vision of how an expansion might be realized.