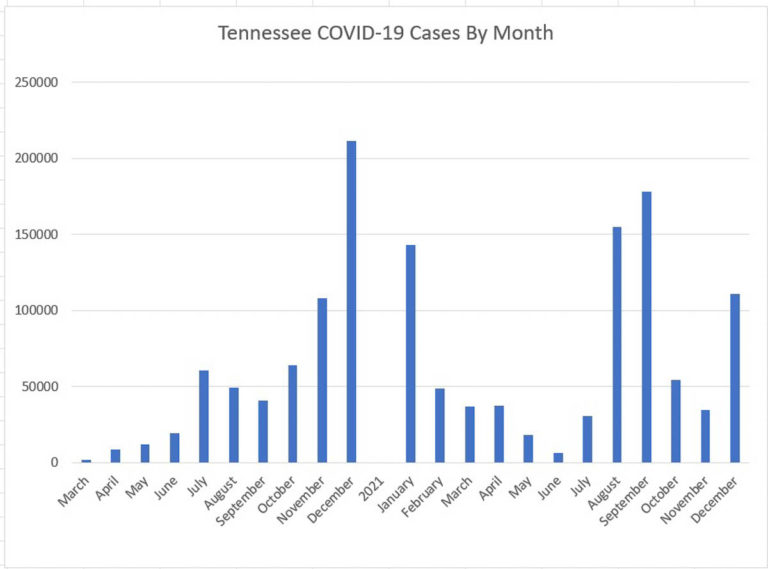 I know we are all done with COVID, but it isn’t done with us. It’s been a month since I’ve reported on the topic and, like many of you, I’d love to never hear about it again. If you have followed the news in recent days, you’ve likely expected us to return to the topic here. I’ll do my monthly report today and then determine how I’ll proceed from here. I’ll likely return to weekly reports and hope this surge is brief and I can move on in a few weeks.

As is the case every month, the numbers are the best I can make them, but they are not perfect. Worldometers is slightly off from the state numbers, but I must go with the best monthly numbers I can get, which are from Worldometers. Even those numbers are constantly changing as the state updates their own numbers. I went back to November and adjusted that number accordingly, but I can’t go all the way back every month.

The state does periodic audits and adjusts case and death numbers up and down and they did at least one such audit this month (here’s an article explaining the complexities). They add (or subtract) a batch of cases or deaths on a given day and there is no way for me to know where to assign those numbers. The same process impacts local numbers, though I have a backup there – I have my own set of local numbers and can sort some of the changes on my end.

Finally, there is the issue of the holidays. The holidays result in less availability for testing, longer lab turn-around times, and delayed reporting. All of that will sort out, but it may be the end of this week or the beginning of the next before we settle into numbers that accurately reflect reality.

Let’s start with the chart above. First, as you can see, after the September surge, case numbers fell for both October and November. Unfortunately, they never fell to the level of the last pause between surges. We bottomed out at close to 35,000 cases in November before rising in December. Between last winter’s surge and the fall surge, we bottomed out at about 6,500 in June. If the bottom of our trough is over five times higher than our previous bottom, we could be set up for a much higher peak when numbers begin rising.

The year-end reconciliation of the numbers for the state, no doubt inflated the case numbers for the month. That said, case numbers are clearly rising in the state. With the advent of Omicron, cases have exploded across much of the country and Tennessee is no exception. At the beginning of December, the state was averaging 1,352 new cases per day. As of December 31, the daily average had risen to 8,860 and as of yesterday it is now (just three days later) 10,306 new cases per day.

Reporting state case and death numbers is no longer going to be possible in the manner I’ve done up to this point. The state has determined they will only report on COVID-19 once each week and that will be on Wednesdays. Additionally, the numbers will only cover through the previous Saturday, so the numbers will always lag. This is the way they publish information on other infectious diseases, though those are not currently in a pandemic. So, starting now, once each week, we will know what the COVID-19 numbers were four days earlier. I’m not sure what to do with that.

As we enter a phase in the pandemic when Omicron is the dominant strain, our understanding suggests it is both more contagious and potentially less lethal. This moves us closer to viewing the virus as an endemic threat. If it is less lethal, why worry?

Well, there are a couple of reasons. The only thing we know for sure is the virus is not lethal for vaccinated (and especially boosted) individuals. With the high rate of vaccinations and large numbers of break-through infections, the risk for serious illness and deaths strictly among the unvaccinated population isn’t as clear.

Additionally, a reduced lethality is great, but if the rate of infection is exponentially higher, a smaller percentage of lethality could still produce a higher number of deaths. For example, if 1% of patients die from Delta and you have 100,000 infections, 1,000 people die. Rates of Omicron spread are being reported as much as 10 times higher. In the above example, you might have 1,000,000 infections in a population in the same period. If the lethality is half as high, you have 5,000 deaths. So, what are the ratios? We don’t know.

There is so much good news at this point in the pandemic: Vaccines are readily available, treatments are better, we understand transmission much better. There is also concern: Many medical workers have quit. The ones who are left are exhausted. How much of a surge can we sustain without an impact on treatment? If care is diminished, deaths increase.

Reported COVID-19 case numbers in Knox County increased in December. While some of the case numbers may have resulted from data reconciliation at the state level, that can’t account for everything. Consider that there were no single-day case numbers over 100 in the month of November. December produced eleven days over 100, spread across the month from the first day (128) to the last (506).

When you consider that two of the last four days of December the county reported over 500 cases and compare that to a total of five days over 500 in the entire last surge, the enormity of what we may be facing comes into focus. The first three days of the new year we have averaged nearly 400 new cases per day. This is not a reporting anomaly.

Will the surge in new cases produce more hospitalizations? Is it now just a cold? We can only watch as it unfolds. For now, I can tell you that at the beginning of December, we had 157 COVID-positive patients in area hospitals. Forty-five were in ICUs and 45 were on ventilators. It was a big improvement over the 757 hospitalized as of September 10, about twelve weeks earlier. However, as of now, the number has risen to 241 hospitalized, about a 60% increase.

Deaths in Knox County rose in December. Just as with cases, they never fell to the lows we experienced last summer, dropping only to twenty-two in November, whereas last May the number dropped to seven. December saw deaths roughly double to forty-five.
Is this exaggerated by the state reconciliation? No. On December 15, eleven deaths were reported for the county, but it was made clear these deaths included adjustments that stretched back through 2021. While some of those deaths could have been for December, I made the decision to exclude them entirely from local death numbers. Since I do not know to which months they should be assigned, they simply are not reflected on the graph.
So, will we see an increase in deaths in January because of the current surge in cases? There is no way to speculate at this point. We’ll have to see how severe the surge becomes and how much severe illness it produces.
As for my reporting, I’m not sure. Perhaps I’ll report on Thursdays so I can have all the state data. Unfortunately, that data will be five days old by then. It’s a dilemma. I don’t think we are going to be able to ignore it, though some data suggests the surge may be brief and — this is the real hope — it may be our last major surge. But who among us wants to make bets about the future at this point?