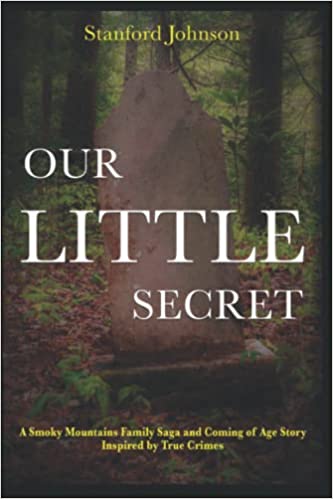 I hope you are all keeping warm through what is likely our coldest stretch of winter. It’s not a bad time to stay in and stay warm for other reasons, as well. Maybe the cold has slowed the flow of stories a bit, though it could be the virus, or simply the ebb and flow of the news cycle.

I’ve paused for a few days because not much really came to me for a bit. In the past, I would write something, anything, just to add content. Sometimes that approach has worked well and sometimes it has caused me to go off half-cocked and put out something I later regretted. I suspect both the news and the weather will heat up, soon.

While I’ve been laying low, I’ve read a new book by Townsend native Stanford Johnson. Both Stanford and the book have good stories. Like many good stories, the kernel for Our Little Secret: A Smoky Mountains Family Saga and Coming of Age Story began with a family mystery. On his fifth birthday, Stanford learned about a grave on the family property near Townsend. He learned from his grandmother that the name on the stone was not the name of the person buried there and that the person, who had died almost fifty years earlier, was a black man. That is all he knew, but he wanted to know more.

After reading the book, I spoke to Stanford to learn more about his journey. His family left Townsend and he graduated from Springhill High School. He tried college, but said, “I wasn’t really ready.” He joined the army in the early eighties, got married, completed his degree and remained in the military for about a decade.

His demons were never far behind, demons which he now identifies as having their roots in the fact that his father never really wanted him. It’s a theme that resonates throughout the book. In the 1990s, after alcohol-related incidents, he was honorably discharged. He lost his wife and, for a time, his son. In 1999 he checked into a hotel with enough alcohol that he thought he could drink himself to death. He survived and stopped drinking for a time, but it would be another sixteen years until he “got loose from the alcohol.”

He re-established a relationship with his son and, in the early years of the new century, after attending seminary, became a Methodist minister. In 2006 he had his first drink in seven years and spiraled into, “the dark decade of my soul.” He had a wreck while drunk and his congregation tried to help him, but he wasn’t ready for help.

He lived in his grandmother’s house for a time in the early 2010s before his dad had him evicted. He lived in his truck for a time staying in a parking lot outside a Walmart. On Christmas Day 2013 the truck was towed and he moved into KARM for three months. He spent nearly two years alternately drinking and hiking parts of the Appalachian Trail. After several months alcohol free in 2015, he “ended the year on a bender,” but walked away.

He entered the Steps Program which houses homeless veterans. He stopped drinking and focused on the book he’d been working at for several years. He had nearly 30,000 words and by March 2019, he had constructed the arc of the story into a 180,000 word book. By a lucky fluke, he was connected to professional editors and the book was shaped into its current 100,000 words. After failing to find an agent and realizing the odds, he self-published the book in December 2021.

The book takes the small kernel of intrigue regarding the grave and imagines what might have led to a black man being buried in the Townsend area in 1921, in a grave with another person’s name etched in stone above it. While the book contains biographical details similar to Stanford and his family, the focus is not only on the main character’s struggle with his own personal demons, but also the country’s struggle with racial reconciliation.

In the book, two families, one black and the other white, come to realize that even though they did not know each other, each family’s history impact the other’s past and present. While painful to confront, the secrets which have been kept for decades, ultimately hold the key to their healing.

The book is currently available on Amazon, at The Chocolate B’ar and The Abbey in Townsend, and at Southland Books in Maryville. It’s not a bad way to wile away a couple of cold days in winter.