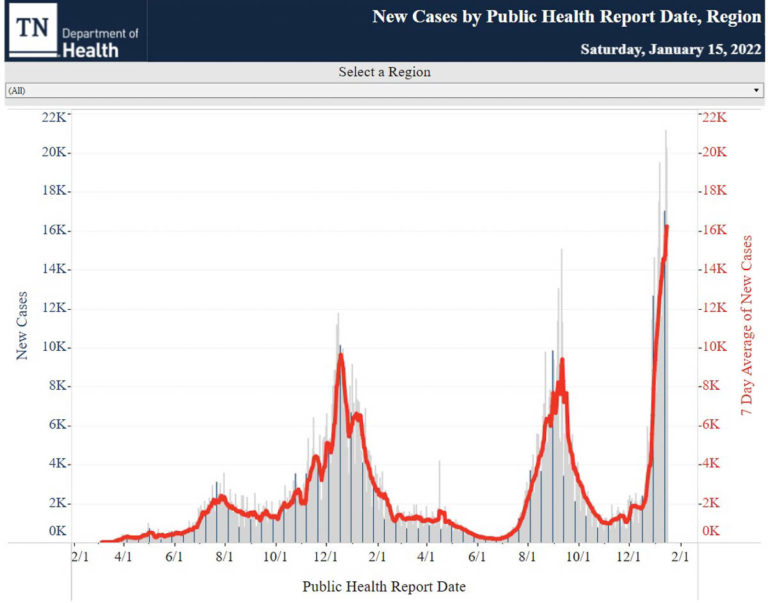 This report comes to you at the peak, to this point, of the COVID-19 pandemic as experienced in Knoxville and Knox County. Unfortunately, most of the information we have is already nearly a week old. Orwell said in 1984, “War is Peace, Freedom is Slavery, and Ignorance is Strength.” Tennessee health officials appear to be saying, “Less information is more information.” The problem is, it isn’t.

There are some measures that continue to be updated more regularly and you can follow them for clues regarding our local situation: UT Medical Center, Covenant Health, and (so far) The University of Tennessee. Regarding the University of Tennessee, it is of limited help now because students have not returned to campus. Additionally, many universities are discontinuing COVID dashboards, so I don’t expect that one to continue long into the new year.

Another source is the Knox County Schools COVID dashboard, but until school is more regularly in session, we can’t get a sense of where the numbers would be – if they would be accurate at all, though that’s another story. The New York Times has a great COVID dashboard and I lean heavily on it. Unfortunately, if you go there for state or county data (they have both), they can only report what our state reports and that is weekly.

If there is an over-arching storyline in COVID in the U.S., it is that the current surge, already receding in some spots, will be short lived. Additionally, we’re getting ever clearer confirmation that this version is very mild for those who are vaccinated and may kill fewer of those who are not. Death rates, however, remain very high.

With all the current talk of COVID-19 being “endemic like the flu,” please remember that over the last ten years, the U.S. has averaged 34.2 thousand flu deaths each year. Spread out over a year, that’s about 94 deaths per day. We are currently averaging 1,889 deaths per day in the U.S. from COVID. Will COVID become endemic? Almost certainly. Are we there? Certainly not.

Over the last week, over 21.2 million new cases of COVID-19 have been reported across the world, an increase of 14% over the previous week. The current average of just over 3 million new cases each day is a pandemic record. The just over 59 million active cases is the largest pandemic number, as well. There have been roughly 339 million cases since the beginning of the pandemic.

After increasing by 10% last week, deaths increased by an additional 9% this week, rising to 50.6 thousand for the week, for an average of 7,200 COVID-19 deaths per day. The current death rate is roughly half of the peak reached in January 2021. Just under 5.6 million people have died of COVID-19 since the beginning of the pandemic.

The U.S. leads the world in total cases with just under 70 million and in total deaths with over 880,000.

The United States is also leading the world in new cases, with an average of over 756,800 new cases per day, an increase of 38% in the last two weeks, but slightly lower than a week ago. January 6 continues to be the high water mark for case numbers, with a revised number of 895,900. It may prove to be the final pandemic peak.

The state is reporting an average of 16,626 cases per day over the last week, up from 13,503 cases per day the previous week, for an increase of 23.1% from one week to the next. This is a smaller increase than the previous week. The record for cases reported in a single was set on January 6 at about 19,600 cases. That was broken twice in the most recent reporting period, with 21,196 on January 13 and 20,264 on January 14.

Just over 82,000 vaccinations were given in the state in the last week, down about five thousand from the previous week. Tennessee’s 51.8% vaccination rate continues to rank 43rd out of the 50 states.

Active cases set a pandemic record in the last report at 6,766. The current report puts the number of active cases in Knox County at 12,188, nearly doubling the record set a week earlier.

Hospitals in the 19-hospital region are reporting (as of 1/15) 471 COVID-positive patients, up 30.5% from the previous week’s 361. 104 are reported in ICUs (up from 87), and 53 are on ventilators (up from 50). The good news is that ICU and ventilator numbers have not risen as steeply as hospital numbers, indicating again that the illness may be less severe this time around.

An additional thirteen COVID-19 deaths were reported in the county this week. The deaths this week included one person age 45-64, four age 65-74, and eight age 75 or older.

Test demand remains high, and test availability is sometimes a challenge. As of this report, the KCHD had not updated testing totals or positive test rates. The site continues to report the 37.63% rate reported a week ago. 58.27% of Knox County residents are fully vaccinated, up from 57.95% last week.

UTK is reporting daily, and their current number indicates 72 COVID-19 cases on campus, up from 54 a week ago. Classes begin on Monday.

Knox County Schools managed a full week last week and for the five days reported increasing cases each day, with Monday through Friday reported cases running 160, 210, 290, 401, and 494 on Friday. Knox County Schools were out on Monday for the King Holiday and classes were cancelled the remainder of the week due to “illness” among teachers and staff. Late yesterday, news came out that Knox County Schools might consider having some schools return to virtual instruction, though by state law they no longer have the authority to do so without a waiver:

We know some schools are having more of a problem than other schools so over the next couple of days we will look at that possibility as we identify schools that may fit that category of being able to go virtual. We’ll submit a waiver to the commissioner and it would be up to her to approve that. We are looking at and exploring that option. We just cannot go virtual as district as we did last year.