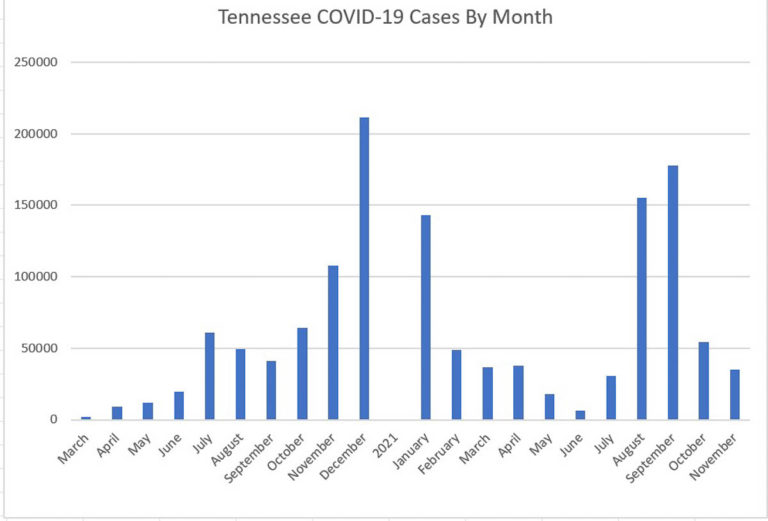 As I suggested I might, I’m going to continue posting monthly COVID-19 Graphs for now. As I also mentioned last month, I had to estimate the last couple of days of state data for October, and that has been corrected to be more precise. Unfortunately, there is a caveat to the numbers this month, as well and that involves a lapse in reporting during the final days of the month due to the holidays. In sum, the numbers say November was much better than the previous three months, though the disease does persist and at higher levels than the lows we reached last summer.

Another useful point of comparison, now that we’ve been in this so long, is the year-over-year view, and that shows November case rates were much lower than the same month a year ago and that the trend is down this year, rather than up. We haven’t seen enough cycles to know if the current improvement will continue into spring or if we’ll have another surge by then. The new variant, Omicron, throws another wrinkle into any prognostication.

Given that we were dealing with a much more contagious variant in the most recent surge, the fact that cases and deaths didn’t reach or surpass the previous levels is almost certainly thanks to vaccinations. People who are unvaccinated are about five times as likely to test positive for COVID-19 as those who are vaccinated. Of those currently dying from COVID-19, they are 19 times more likely to be unvaccinated. In other words, about 95% of all current deaths from COVID-19 are among the unvaccinated.

Another set of numbers stood out to me as I compiled these statistics. Looking at the demographics of who is dying in Knox County, a basic truth emerges: The largest group dying of the virus are men between the ages of 45 and 64. It’s quite different than earlier in the virus when older people were dying in large numbers. Males have died at higher rates since the beginning of the pandemic, with about 25% more deaths among males than females in Knox County. Of the twenty-two county COVID-19 deaths reported in November, eleven were between the ages of 45-64, five were 65-74, and six were 75 or older.

On the mask usage front, Compass compared Knox County’s pediatric COVID-19 rate before and after the imposition of a masking requirement by a federal judge. Here’s a bit of what they found:

During the two months since a federal judge imposed a mask mandate on Knox County Schools students and staff, Knox County has continued to register more COVID-19 cases in the 5-to-18 age group than Tennessee’s three other largest counties — but the gap has shrunk considerably.
And for the month of November, Knox County has had one of the lowest rates of the four — while Hamilton County, which dropped its mask requirement on Nov. 8, has registered the highest . . .
In the two weeks leading up to Thanksgiving, after dropping its mask requirement, Hamilton County recorded the highest rate among the four, at 0.29 per 100 — compared to 0.26 for Shelby and 0.25 each for Knox and Davidson.

So, where do we go from here? Have we seen our last surge or will Omicrom throw us into another round? If cases surge will people mask up again and/or get vaccinated at higher rates? It’s hard to say. We can say with certainty that we remain at the mercy of the virus as witnessed in Europe’s current surge despite generally much better vaccination rates than the U.S.
Only time will tell. I’ll check in a month from now, if not before with updated numbers. Here’s hoping they continue to improve and we see the virus fading away.