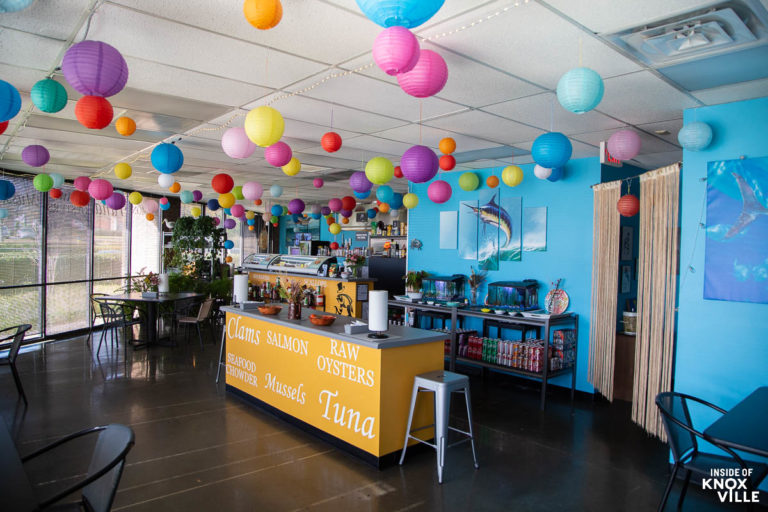 Originally slated to re-open in August, Broadway Market (900 East Hill Avenue, #130) will open tomorrow, December 1 (though by phone-in reservation or order only). Long-term readers will remember that chef and co-owner Don DeVore underwent two surgeries last summer. The first was to save his life and the second was to allow him to recover. It’s been a long, hard journey, but Don and Lauren are ready to re-open starting tomorrow.

A myriad of delays postponed the opening, including the supply chain issues that have been reported so extensively. A primary focus during the time away was securing a $30,000 hood which allows larger amounts and a greater range of cooking possibilities. After initial delays, the hood was shipped, but the exhaust fan was sent to Cincinnati instead of Knoxville. From there, Don said, “It was loaded on a truck and never seen again.” They had to wait for a replacement fan.

Returning customers will find an expanded menu which, for the first time, will include fried seafood and burgers (half pound in four different versions). Also making an appearance will be four different versions of Po’ Boys: Oyster, Shrimp, Haddock, Catfish and smoked sausage. The French bread for the po’ boys is a heavenly bread (I researched a bit on site) out of New Orleans supplied by Leidenheimer. Chicken will be supplied by Springer Mountain Farms. Fried or grilled chicken will be served and seafood will be offered both ways, as well.

While the menu has been expanded, some items are still hard to come by. Oddities like onion rings are hard to find, while other former staples of the restaurant like scallops have doubled in price and are too expensive to serve. You will find Don’s soups and sandwiches still on the menu along with his long-time favorite Poké (tuna only at this time). As they navigate the supply chain and work with the current menu a while, it is likely to evolve. Retail offerings of some foods will also continue.

Lauren explained that the couple approaches their restaurant a bit differently than others. While some might say the customer is the focus, she said the food is the focus. They feel if the food is right the customer will be happy. This includes buying the best ingredients, serving on proper plates (even the take out is sent in microwavable, washable plates – Don said of people using Styrofoam, “What is this? The 80s?!?”), and the best preparation. “Good food at good prices,” is what they are offering.

For now, the restaurant will be open only during lunch, though they will likely add later hours eventually. They will be closed on Sundays. Orders for takeout will be taken on the phone, as will reservations for dining in. As they work with the new menu, they may be able to take on more business, but initially, they request that you call 865-247-7543. For large orders, they will need 24 hours notice.

Online ordering will soon be available on the website (https://knoxvillebroadwaymarket.com/) which should go live tomorrow. Delivery will soon be offered as an option. The full menu will be posted on the website. The easiest thing at this point is to order by phone and pick up your fried or your healthy food to go.

Finally, the couple wants to thank everyone who supported them through their Go Fund Me campaign, without which it would have been hard to see a path to re-opening. Particularly, Don emphasized “Phil Lawson, LHP Capital & Brad Brazier (Property Manager) were instrumental in helping Lauren and I complete the property improvements.”