Regal Celebration of Lights Kicks Off the Holidays 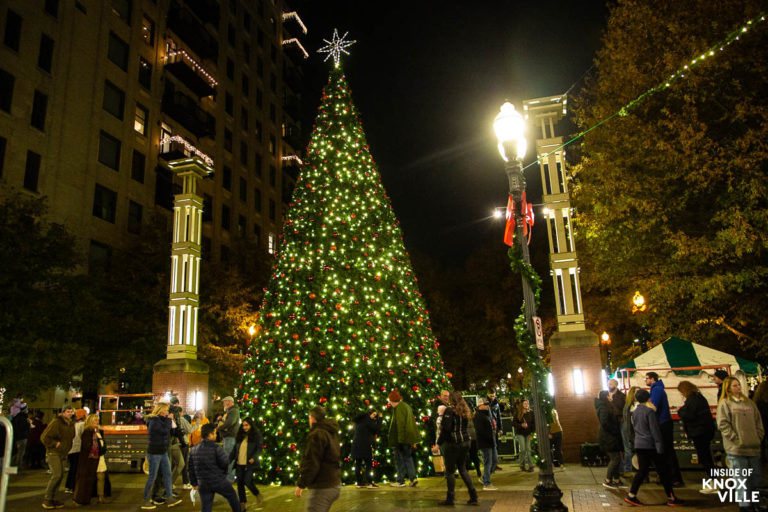 The Tree is Lighted, Regal Celebration of Lights, Knoxville, November 2021

The Regal Celebration of Lights launched on Friday night, bringing back a number of the traditions that were interrupted in 2020. Downtown was filled with thousands of guests taking part in the festivities. While the centerpiece of the evening’s activities was the lighting of the tree on Gay Street, that was only one of many events and activities sprinkled around downtown.

The stage at Market Square was the site of the WDVX Ho Ho Hoedown and I really enjoyed Tray Dahl and the Jugtime Ragband. It’s kind of hard to reconcile “Saint James Infirmary,” with the holiday festivities all about, but it worked somehow and they generated quite a bit of excitement. The fire pit located on that end of the square helped keep things warm.

The ice skating rink is back and there were no shortage of takers. Some might have regretted it before the evening was over, but brave faces abounded, along with a few reflecting the sheer terror of the moment. There were a few couples trying to play it cool will slip sliding away and lots of families and at least a few smiling children.

The wooded area of Krutch Park featured Santa later on in the evening, with children sitting on a bench in front of the old guy. I guess sitting on his lap is passé at the moment. Photos were secured with Santa, while other children busily wrote letters and mailed them via a special mailbox (which will remain in place until Christmas Eve), just a few feet away. You have to wonder if some smart kid didn’t ask why they needed to write St. Nick a letter when he was present in the flesh just a few feet away and Christmas lists could be delivered face-to-face.

In the middle of Union Avenue, between Market Square and Krutch Park, a large train set operated on a flatbed trailer. Lots of people gathered to watch its mesmerizing trek around the track. Trains apparently still fascinate amidst all the more modern day attractions.

Krutch Park Extension was the site of the lighting of the Christmas Tree. As people vied for the best spots among the muddy patch of grass, a band played leading up to the lighting. Hundreds more people were gathered in the middle of Gay Street, which was pedestrian only for the night on that block. Christmas projections danced along the surrounding walls and the crowd joined in a countdown to the lighting of the tree. Fireworks announced the moment.