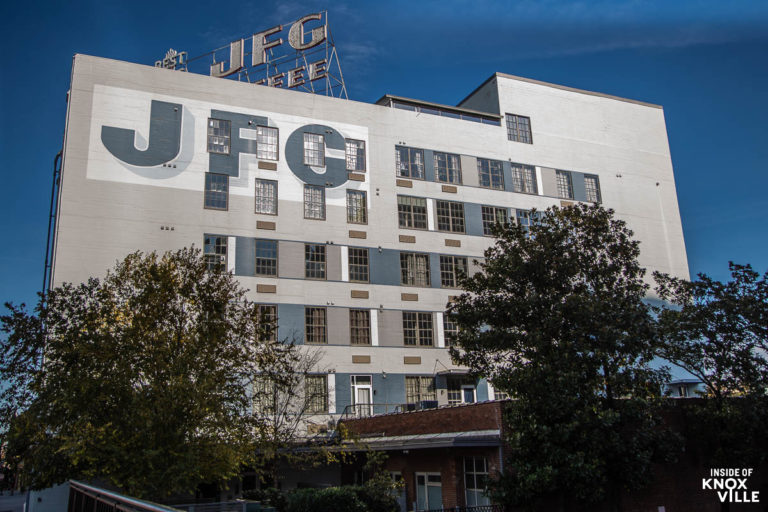 A major downtown building is changing hands as the JFG Building (JFG Flats) at 200 West Jackson Avenue is purchased (via Jackson Central Partners, LLC) by Thomas Boyd and Will Sims from Dewhirst Properties (DBA: JFG Partners). The building has been in the hands of Dewhirst Properties since 2009 when they renovated it into apartments.

The seven-story building, constructed in 1924, originally housed Bowman Moore Hat Company. The company only used the building for two years, and in 1926, it was occupied by JFG. JFG Coffee Company, which made a range of additional products, including tea, mayonnaise and peanut butter, and was founded in Morristown in 1882 by James Franklin Goodson. The company sold in 1965, and in 2005 the roaster was moved off Southerland Avenue.

After the Dewhirst renovations, the JFG Building became home to fifty-four downtown apartments and three commercial spaces. The JFG Flats contain a variety of studio, 1-bedroom, 2-bedroom, and 3-bedroom apartments. After much speculation, Dewhirst Properties informed residents of the sale and the it becomes final today.

In the letter to residents, it was noted that Dewhirst Properties had considered options regarding the property. Those options included conversion to condominiums and, to that end, a number of the units have not been filled as residents have moved away in recent months, with the idea that condo conversions would begin. With the sale, that plan will be reversed and the empty units will be available for rental once again.

I spoke to Thomas Boyd and Will Sims regarding the move. The two heard the plans to potentially convert the building to condos and reached out to Dewhirst Properties to see if a sale of the building might be possible and the offer of $12,950,000 was accepted. Oliver Smith Realty was the closing agent.

Thomas is excited, among other things, about the prospect of working with Curious Dog, the owners of which are his friends. Beyond that, the two are happy to be “continuing to be the stewards of that building.” Thomas feels that having one owner of the building helps protect its future.

He’s also interested in having apartments rather than condos because renters live in the homes whereas downtown has a number of condo owners who are part-time residents. He feels full-time residents better help downtown move forward. The two see the building as a generational investment and are very invested in having the Old City thrive. He hopes that by keeping prices at as reasonable level as possible, it will help keep the city growing.

Thomas said that Dewhirst Properties has done a great job developing a number of buildings downtown, including this one and that downtown “owes a debt of gratitude to him,” and they are honored to take this building on for its next phase.

The units themselves feature high ceilings and very large windows. Thomas pointed out that, given the concrete construction between each floor and each unit, it may be one of the quietest places to live downtown. Some units have rooftop access and those decks will be refinished. The JFG sign will also be refurbished. The units range from just over 400 square feet to over 1100 square feet.

Somewhere around half of the units are unoccupied and are now officially on the market. If you are interested (quickly) you are requested to send an email inquiry to leasing@jcgknox.com.