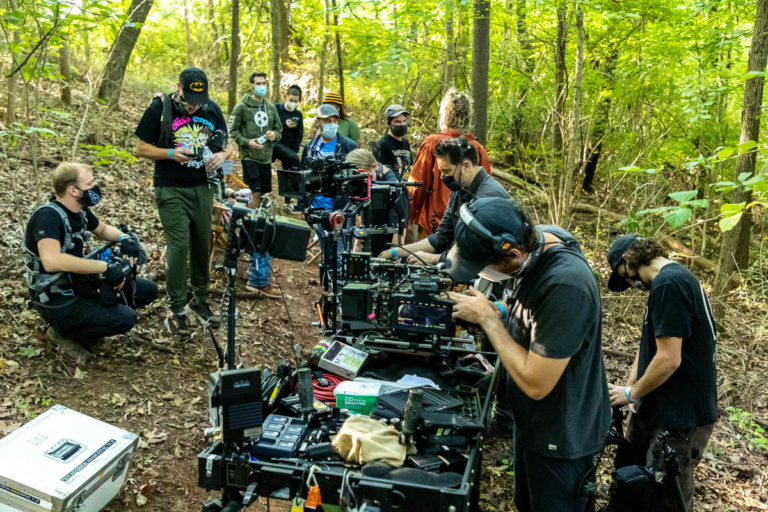 As I mentioned yesterday, there is more than one movie afoot in the area. Brian Conley, with Conley Entertainment Group, has produced a new film, Homestead, which was recently filmed in south Knoxville. The film will be screened at the Cannes Film Festival with the hopes of achieving distribution. I spoke with Brian about his company, the film, and plans going forward.

When last we spoke (three years ago), Brian announced plans to open headquarters for the Conley Entertainment Group in south Knoxville. As 2019 passed and the construction of the building on Sevier Avenue continued, Brian was casting for a project called Proverbs of Hell when COVID-19 hit and stopped everything. With the uncertainty he gave up his option for the space in the new construction. He is now concentrating his search for a headquarters in downtown.

The current project, he says, came together quite quickly. He used the time during the pandemic to read scripts. “I ran across this script written by this talented writer/director named Marcos Ephron . . . A friend sent it to me. I probably read, over the last two years, two-hundred scripts and this was the best one I had read.” Just after he read it, he met a small group of investors he’s been working with for lunch and told them about  it. They asked how much money he needed to make it. “The thing got green-lit a day-and-a-half after I read it.”

This happened in spring of this year. Even with all the contracts remaining to be worked, including bringing Marcos on board to direct it, casting, location scouting and more, the film has already been shot. Shooting during the pandemic was more challenging. “If any of the main characters got COVID, you’ve got to shut down for two weeks.” That gets expensive on a location shoot. “It was very risky to do and we got through it.”

His excitement comes through clearly as he discusses the project. “The devil is in the details and we’ve got to put it all together. We’ve got to do all the special effects, but I’m so excited about this one. This is the biggest movie I’ve done and it’s going to be the best.”

The span of the movie is a day-and-a-half as the couple seeks to see it out together. “There is no way for me to do it justice, it is such a good script. It’s so well written. When I was describing it to my investors, I’m pretty sure I got tears in my eyes. I had just read it and I was so moved by it. I wasn’t even trying to sell them on it, I was just telling them about it.” They are “all-in for about three million dollars” which, as Bryan said, is pretty reasonable “for an end of the world movie.”

Brian says the cast is a great one. Leven Ramblin (Hunger Games) is the lead actress in the role of Holly. “I cannot express how wonderful she was in this role. The script is a showcase for her talents . . . The amount of emotion, vulnerability, and strength that she had to bring to the role was a key. We had to find the right actress for this role, and man did we luck out . . .”

Jake McLaughlin (Quantico) is the lead actor. “Jake is the greatest guy you’ll ever meet . . . He’s an Iraq War veteran who signed up after 9/11 and served two tours . . . he plays the role of Ryan. We needed a man’s man who could handle a gun and an axe. He was terrific.”

“There are two other lead roles and then a very important supporting role. Gene and Gabby are the antagonists.” They are played by Shane West (League of Extraordinary Gentlemen, E.R., Gotham), and Sohvi Rodriguez (Animal Kingdom). Shane started his career in A Walk to Remember with Mandy Moore and “was sort a teen heart-throb back in the 90s. Dee Wallace (E.T. The Extra-Terrestrial) plays the role of Carla. “Dee was the mother in E.T. She was the lead in Kujo, the lead in The Howling, and just the sweetest lady.”

In addition to the strong out-of-town cast, he said there is also a significant local presence. Curt Willis is in it and both he and Mike Stanley have speaking roles. “We filled all the extra roles, of which there were myriad, with local talent . . . We tried to use local as much as we could.”

He said most of the shooting took place at Fort Dickerson. “A lot of people in Knoxville don’t even know where it is or how beautiful it is. The quarry factors into it a great deal, but also the surroundings. We shot up on top of Fort Dickerson surrounded by nature. You don’t realize that you are downtown. If you point the camera in the right direction, you think you are in the middle of the Smoky Mountains.” He said they did struggle a bit with ambient sounds such as sirens, airplanes, and trains.

They also had some bad weather days, but others which were beautiful. “The dailies are gorgeous. When you look at this movie you are going to say, ‘That is a beautifully shot movie.'”

After shooting about six months are required to edit, work on sound, add music, redo any missed dialog, add special effects and more. They hope to have it screened at the Cannes Film Festival in May 2022, though it is not entered into the festival. “This is a movie that will translate to audiences worldwide. We feel very strongly that we want to screen it for foreign film agents. We’re hoping to have the final cut completed in April.

“I think it’s going to be so good. There is a line in the movie, ‘Memento Mori,’ which is Latin for ‘Remember you are going to die.’ People are going to ask themselves, ‘What would I do? How would I live if I knew the world was going to end in a given amount of time?’ It’s something that everyone could benefit from asking themselves, focusing on what is important.” He expects it to have a very wide appeal.

“I really feel good about where Conley Entertainment Group is right now. It’s a tough industry. We had great success with The Basement. He has served as Executive Producer since that movie on About Us, released earlier this year, and Ire which will be released later this year. Homestead is their fifth movie.

He said he really appreciates the support they received from the Tennessee Film Commission and the Knoxville Film Commission (Curt Willis). In addition to looking for a spot to call home in the downtown area, they are looking toward future projects. “It is our goal to shoot many more projects in Knoxville.”