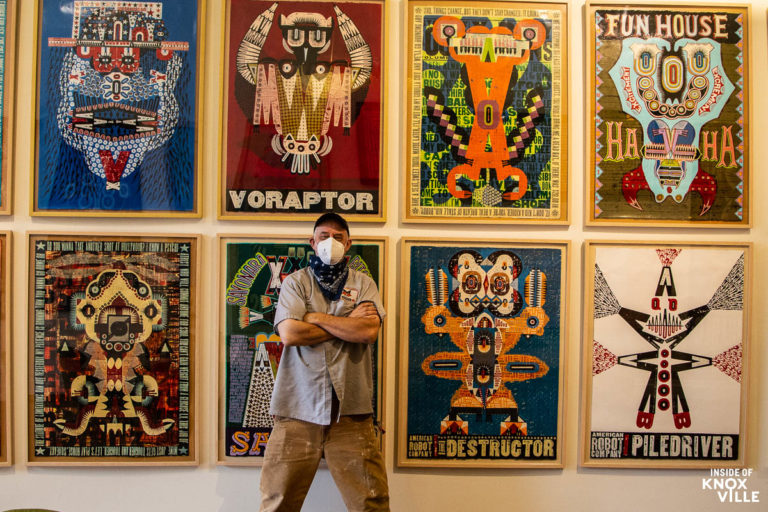 The first time I saw Kevin Bradley, sometime around 2009, he was walking around downtown wearing a coonskin cap. I’d just moved downtown and had yet to begin documenting its stories. Clearly, there was a story. Twelve years later, I sat down with the now coonless Kevin Bradley and got that story. Kevin has opened a pop-up installation of his “Voodoo Rocket Institute of Advanced Typographic Research” at 130 West Jackson Avenue.

It is hard to believe that what hangs on those walls is letterpress. Kevin has removed size as a limitation from a relatively prescribed size for the art form. He’s incorporated stories and is looking to expand the stories to even larger sizes. I have one of his 2010 pieces on my wall and it’s hard to connect that to his current work.

He’s from Greeneville, Tennessee and says he “rambled about down there, worked in a factory, joined the army, played a lot of golf.” He came Knoxville to attend UT and “I spent eight years undergrad at UT in the art building because I liked it. I went through design, painting, and print-making programs.”

He said print press work was a dying art thirty years ago and he “hated computers. I had the innate ability to crash a Mac computer . . . I hate the machine and the machine hated me, so I went low tech. I discovered an old printing press at the print lab and taught myself how to use it.” He started driving to Nashville just to go inside Hatch Show Print and he knew that’s what he wanted to do.

“The day after I left college, I went to work at Hatch Show Print in Nashville. I didn’t give them a choice, I told them I was here to work. The guy told me if I could make five posters by the end of the day, I’ll give you a job. I had them done by lunch, saying ‘What’s next?'”

He likens his three years there to the equivalent of his graduate school. After working hard for several years at a low wage, largely unable to follow his own muse, he decided to start his own company. He and Julie Belcher started Yee Haw Industries in a barn in Kentucky and after two years “brought it to Knoxville in ’97.” They opened a shop on Gay Street because “it was empty.” They operated the shop together for seventeen years.

“Those posters got around the world,” he says, and the company had a successful run. He said after churning out so much work at his first job, he knew how to work quickly and produce a lot. He said he had a lot of contacts in the music world, mentioning that he was in Nashville for the birth of Americana, when R.B. Morris had a hot show there, Lucinda Williams, Steve Earle, and BR549 all rolled into town. That helped spread his posters as he made them for the bands who took them everywhere they went.

“I was connected to Steven Heller of the New York Times who was on the board of Print Magazine, the Bible of graphic design.” Print magazine did an annual review and he said they would always get multiple pieces in that, and it would travel the world. “People would find us through that. We would travel and do festivals, Jazz Fest, South by Southwest. I’ve laid down probably one of the most important bodies of print press work in thirty years and I’ve taught an army of kids how to do it.”

After he and Julie dissolved Yee Haw, he moved to Santa Monica where he started fresh with Church of Type. “I wanted to let that be my California experience. All the work printed with the Church of Type label is from that time. Now I’ve opened the Voodoo Rocket Center for Advanced Typographic Research to continue and keep it breathing.”

He said while in California he “made a million posters and invitations” for people, but it was impossible to cover the rent doing that work. He said, “I’ve collected all this typography and it sits in shelves and mocks you, ‘What are you going to do?'” He said he was “forced to make art with what I had to survive. I took the letter form and started drawing with it. Out of that came a lot of robots and monsters which suited my ten-year-old mentality.” He said humor has always been a part of his work

He began to incorporate story into his art. He made word pieces of stories that he writes, and the story circles the paper and “becomes the art. Letters want to become words, words want to become sentences, and sentences want to become stories . . . I love the story now . . . everything is growing bigger now. I was working 18X24 poster press for twenty-five years. I know that space. There was no mystery left.” He said as he moved up in size he had to learn the new space.

“I’ve had the luckiest career in the world. There’s been a lot of heartbreak and hard work along the way. My body’s breaking down, but I still love it and geek out on it as much as I did thirty years ago. There’s no short cut.” He said the larger works take two weeks. “I’m hand stamping every letter because nobody has enough type to set that up and print editions of it, so they are one-offs.”

His current goal is to make one four times larger than his largest piece. “It’s going to be sixteen feet wide and eight feet tall.” He also has a goal of having a show at the Museum of Modern Art in New York City and says the larger work would be necessary there. He’s never gotten to have a show with his larger pieces because they sell and are scattered around the world.

He barely uses a computer to do his work. “If Guttenberg was alive today, he’d be hanging out with me, and we’d be playing. The natural beauty of it is what always attracted me to it.” He’s moved by to Greeneville to help his parents and has set his studio up there. During the pandemic he began incorporating paint, using sign painter’s paint, into his pieces because he had the time.

He embraces change regarding the names he works under, saying it keeps some mystery as people must seek him out under different business names. He said the work he produced in California as Church of Type would never have been produced here. “You have to shake off the southern guilt. I saw the world with a with a wide-open view. I had the idea that it (the work) wanted to be something more.”

“Now that I own a building, the pressure’s off and I’ll just be able to be that old crazy guy who’s making crazy stuff.”

He said he’s glad to be back and glad he had the freedom to come back and care for his parents. “I have great parents. I still get to do what I want to do. Hopefully I’ll build a little roadside attraction down there. I really miss the community and the shop was my connection to the world. I was at the center of the universe there for a minute. I had days when my only customer was Bob Dylan. I got to meet all my heroes, and everyone has been so kind and gracious to me, I’ve tried to pass that on.

Of the show he says, “Be prepared to have your eyeballs tortured. Think about record stores. You would go inside, and it was a war for your eyeballs. How many shitty records did we buy because they had a great cover? I want to bring some excitement back to the experience.”

The gallery was set to close at the end of this month but was extended to the end of the year. There will be receptions in November and December. The gallery is adjacent to Robin Easter Design, and he said she will open it up on request during business hours.