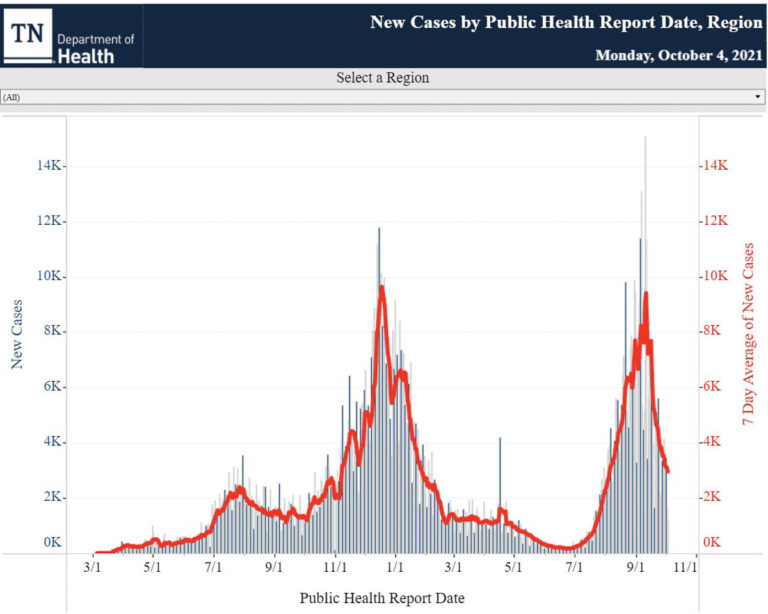 I’m coming at this a little late today, due to hunting and gathering activities for future articles consuming my morning. This one may be a bit briefer. I think the numbers and charts today help answer a little of the obvious question from yesterday’s charts, which, admittedly, look grim. We started a slide in cases just after the middle of September and it has persisted. Our peak was so high early in the month, that September’s high numerical fate for both cases and deaths was set early.

I expect October’s numbers to look very much improved, unless we hit a reversal in the next week or so. And speaking of improvements, both the state and local numbers are now lower than they were when I resumed my Tuesday report. I plan to do one next week and, if the downward trends have mostly continued, that will be my last unless a future surge dictates otherwise. I will continue the Friday reports for a bit longer.

The state has now reported 1,238,023 cases since the beginning of the pandemic and continues to hold the distinction of having the most cases per capita among the fifty states. If Tennessee were a country, its rate of 181,284 cases per million would rank first in the world among all countries with more than one million in population. Of all the countries, Tennessee would trail only Seychelles, Montenegro, and Andorra.

In the days since the last update, the state reported 56 COVID-19 deaths on Friday, 54 on Saturday, 29 on Sunday, and 35 on Monday. 15,323 Tennessee residents have died of COVID-19 since the beginning of the pandemic. Over the last week, 371 deaths have been reported, for an average of 53 per day, down from 72 per day a week ago. The state remains 22nd in deaths per capita in the U.S.

Though the number bumped up slightly in the last day, hospitalizations overall continue their rapid decline, with the most recent report indicating 2,195 COVID-positive Tennesseans currently hospitalized, 715 in ICUs, and 511 on ventilators. These totals reflect drops from 2,701, 833 and 590 a week ago. There are 34 current pediatric COVID-19 hospitalizations in the state, down from 49 a week ago.

After dropping significantly for several weeks, the rate of vaccinations increased the last seven days to almost 137,000 shots given in the state. The previous week had seen only 93.2 thousand. Whether the result of mandates, fear, or reasoned choice, it is encouraging in terms of preventing or blunting the next surge. The rates are still low, but improving, at 46.7% fully vaccinated and 52.8% with at least one shot. Tennessee ranks 44th in full vaccinations among the states, the same as last week.

The most recent test positivity rate reported by the state is 12.07%, but Johns Hopkins reports a 17% positive test rate over the last week. This week the state dropped from 36th in per capita testing among the states to 38th.

Since the last report, the Knox County Health Department reported 157 cases on Saturday, 133 on Sunday, 52 cases on Monday, and 128 today. The 52 reported yesterday is the lowest single-day report since July 27 (48). The average for the five days was 118, identical to the 118 average for the same four days a week ago.

Since the beginning of the pandemic, 60,325 cases of COVID-19 have been confirmed in the county, and 15,208 are considered probable. Also encouraging is the continued decline in active cases, with 2,476 currently reported. This marks the lowest number of active cases since August 18 (2,433). One week ago, there were 3,265 known active cases.

The number of tests administered also continues to decline, down to around 5,000 this week from about 6,000 a week ago. The current rate of 16.4% positive tests is down only slightly from 16.5% last week and remains more than three times as high as we need. Test reporting time is now 1.3%.

While they have bumped up slightly in the last 24 hours, just like the state numbers, hospitalizations have continued to decline in the 19-hospital central East Tennessee region. There are currently 470 COVID-positive patients in our regional hospitals, with 147 in ICUs and 109 on ventilators. A week ago, those numbers were 539, 144, and 112 respectively.

527,267 shots have been given in Knox County since they became available. A surge in vaccinations was seen over the last week, with 12,663 shots given in the last seven days. For each of the previous two weeks, the number was 8,000 or below. 56.97% of Knox County residents have gotten at least one shot, and 52.54% are fully vaccinated. Both numbers are better than the state, and if Knox County were compared to state rates, it would rank about 26th, down a spot from last week.