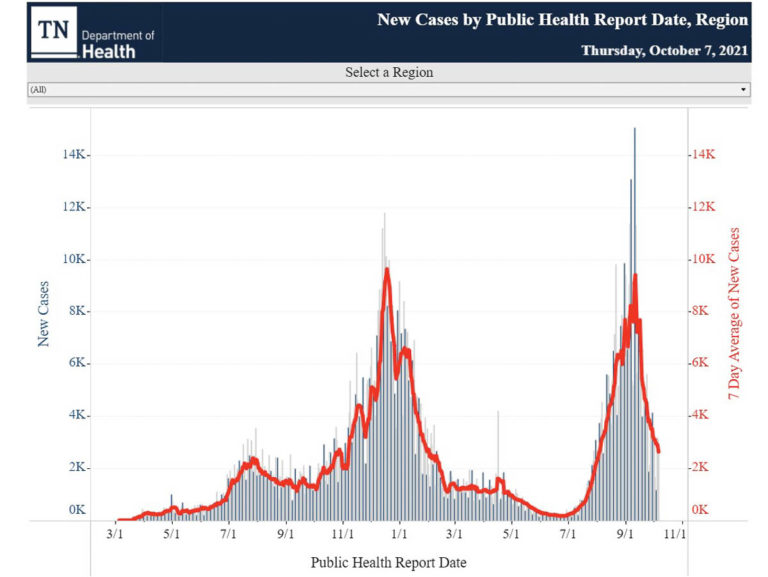 Welcome to the Friday update and, thankfully, to continuing declines in cases numbers, hospitalization, and death totals. Make no mistake: they remain high, and we may well see additional surges. Still, it’s easy to imagine we may be approaching a lull in transmission similar to what we experienced last summer. Maybe. The virus hasn’t been extremely predictable and U.S. vaccination rates remain poor and its worse in our home state. If the numbers continue to fall, I’m imagining taking a break from COVID reporting starting in November, but we’ll see.

Cases across the world continue a steady decline at about the same pace as last week, with a 7% decline in cases this week and a 9% decline in deaths.

Over 6.41 billion doses of the various vaccinations have been administered, including about 170 million in the last week, down from about 180 million a week ago. Fifteen countries have fully vaccinated 70% or more of their population, the same number as a week ago. Twenty additional countries have fully vaccinated at least 60% of their population, up two from last week. The top five countries in the world for full vaccination rates are U.A.E. (86%), Portugal (85%), Malta (84%), Singapore (81%) and Qatar (78%).

Eighteen countries, mostly in Africa, have fully vaccinated fewer than 1% of their citizens. This number is down from 20 a week ago. The countries in the world with the lowest vaccination rates all have rates .2% or lower and include (from the lowest) Congo, Turkmenistan, Yemen, Benin, Chad, Haiti, and Central African Republic.

Over 45 million cases of COVID-19 have been confirmed in the U.S. since the beginning of the pandemic, along with 730,206 deaths from the virus. The U.S. continues to lead the world in total cases and deaths. Among countries with at least 1 million citizens, the U.S. remains sixth in per capita cases, but has moved up one spot to fifteenth in per capita deaths from the virus, surpassing Italy.

There are 9.81 million Americans with an active case of COVI-19, down about 70,000 from last week. While this number remains very high, it began dropping October 2 after setting a pandemic record the day before.

COVID-19 deaths in the U.S. have also continued to decline. The U.S. is averaging 1,765 COVID-19 deaths each day, down from 1,927 a week ago and down about 13% over the last two weeks. Hospitalizations have fallen by 20% in the last two weeks. The states seeing the highest current rate of death from the virus include (from the top) West Virginia, Idaho, Georgia, Wyoming, and Alabama. The states with the lowest current death rates include Nebraska, Connecticut, New York, New Hampshire, and Rhode Island.

The states with the highest rate of increase in virus cases this week are, in order, Alaska, Montana, North Dakota, Wyoming, and West Virginia. Alaska’s rate has finally begun a decline, down 9% over the last two weeks. In order, these states rank 33rd, 36th, 45th, 48th, and 50th in full vaccination rates, for an average of 42nd.

The reason is Louisiana, which has done a stunning turnaround in recent weeks from one of the worst spreads in the country to the fifth lowest. How did this happen with such a low vaccination rate? Masking. A state-wide mask mandate was put in place on August 4 — not just for schools, but for every indoor space. They were averaging 4,338 cases per day when the mandate went into effect. It continued to rise for nine days before dropping to its current level of 859 cases per day. Cases in the U.S. did not peak until early September, so they were weeks ahead in their decline.

In the U.S., just under 399.6 million COVID-19 vaccination shots have been given, including about 6.7 million doses in the last week. At this point, many of those are booster doses, so it obscures the number of new people becoming vaccinated. About 949,000 doses a day were given over the last week, up from 727,000 per day the week before. The New York Times still reports the same percentages for the U.S. as a week ago: 56% are fully vaccinated and 65% have at least one shot.

15 states have vaccinated at least 60% of their population, up from 13 last week. The states leading in vaccination rates remain the same, with Rhode Island moving ahead of Maine: Vermont, Connecticut, Rhode Island, Maine, and Massachusetts. Vermont is the only state to have reached a 70% vaccination rate. The lowest states remain the same (starting at the bottom), with Idaho dropping below Wyoming: West Virginia, Idaho, Wyoming, Alabama, and Mississippi.

The state of Tennessee has reported 1,246,815 cases of COVID-19 during the pandemic, leading all states in the country in per capita cases. The state added 18,295 cases in the last week, down about 6,300 from the previous week. The current daily average of 2,630 new cases per day is down from 3,527 a week ago. The rate of spread in the state is 19th worst in the country, down ten spots from last week, with a 43% decline in cases over the last two weeks.

15,507 Tennesseans have died of COVID-19, including 358 this week, a drop from 409 reported last week. The state is averaging 51 deaths per day, down from 59 a week ago. Average daily COVID-19 deaths in the state peaked on February 6 at 135 per day but fell to just 2 per day in mid-June. Tennessee ranks 21st in per capita COVID-19 deaths since the beginning of the pandemic, surpassing Michigan’s rate to move up a spot this week.

Test totals continued to average around 20,000 a day across the state, with over 21,000 tests reported yesterday. The positivity rate of 10.38% for the day, reflects a continued improvement, with a drop from 12.66% a week ago. Johns Hopkins University puts our positivity rate at 15%. Tennessee ranks 39th in per capita testing in the U.S., down two spots from last week.

144.5 thousand Tennesseans got a vaccination over the last seven days, an uptick from 109,000 last week. The state keeps two running totals now, including a separate one for the booster, which does likely account for the surge. The only way to know how many of the 144.5 thousand were booster shots is to have tracked the booster numbers over the last week and subtract them.

I’ve now started tracking them, but had not last week, so I can’t calculate how many of the shots given this week were boosters. Next week I should be able to answer that. For now, all I know is that of the 6,921,009 vaccinations given, 186,626 were boosters. Clearly a solid amount of the shots given were first or second shots because 47% of Tennessee residents are fully vaccinated, up from 46.2% last week. 53% have gotten at least one shot, up from 52.6% last week. The state dropped back to 43rd in full vaccination rates in the U.S. after ranking 42nd a week ago.

COVID-19 hospitalizations continue to decline, with the 19-hospital region reporting 416 hospitalizations from the virus, with 125 in area ICUs, and 99 on ventilators. A week ago, those numbers were 494, 143, and 110, respectively. Only 11 ICU beds are currently available in the region, down from 13 a week ago and, assumedly, reflecting demand from other illnesses. 143 of the 299 ICU beds currently in use is occupied by a patient with COVID-19.

East Tennessee Children’s Hospital reports five pediatric COVID-19 hospitalizations over the last week, down from 10 the week before. Three were 0-5 years-old, one was 6-11 years old, and one was 12 years old or older. Of the older group, the single patient was not vaccinated. As of the last report, four children remain hospitalized, with three in the ICU.

Test demand continues to drop, falling below 6,000 over the last seven days. The positive test rate of 17.7% moved up slightly from last week’s 17.1%, which is troublesome and indicates we are not finding number of cases we need to find to slow the spread. Turnaround time for results is around 1.4 days, a number which has shown steady improvement with the reduction in test demand.

The pace of vaccinations has recently increased in the county, with 12,033 shots given this week, up from 9,402 given last week. Again, it is likely that a large portion of the increase is due to booster shots. First and second vaccination rates continue to move up at glacial paces, with 52.8% of Knox County residents fully vaccinated (up from 52.16% last week) and 57.15% having had at least one shot (up from 56.78% a week ago).

The Knox County Schools are reporting 189 active cases among students and staff, down from 281 a week ago. The University of Tennessee is reporting 41 cases, down from 47 a week ago. Both KCS and UTK are far below their peaks reached a few weeks ago.

The fight over mask mandates is raging inside one school district in Tennessee.@CalNBC joined @joefryer on #MorningNewsNow to break down the latest developments in an on-going battle in Knox County.https://t.co/U4UZMHn7bF pic.twitter.com/gQjthq6bB0