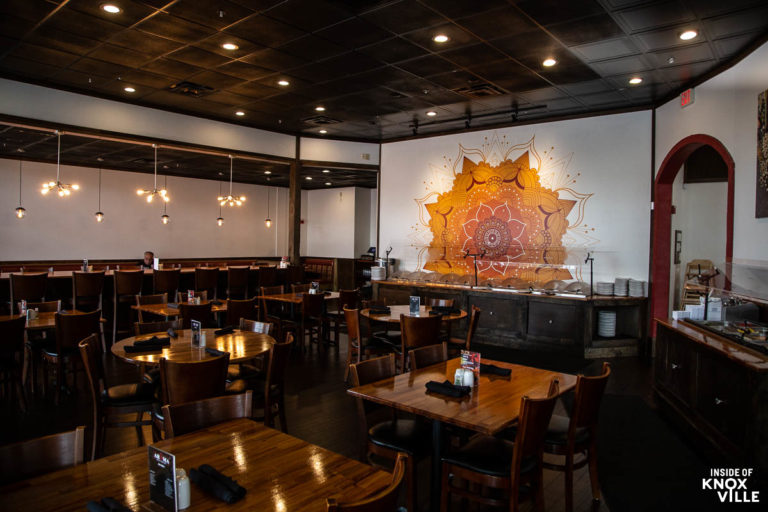 Vijay Bansode, owner of Aroma Indian Kitchen on Cedar Bluff Road, is opening Aroma Express at 143 South Gay Street, on the corner next to Wicked Chicken. The new spot will offer some of his finest Indian food served in a fast casual style. He plans to feature fresh ingredients and his Indian recipes, but they will be served on a wrap with carry out and on site seating options available for dining.

I spoke to Vijay about the journey that brought him to this point. Originally from a city “eighty miles south of Bombay,” he obtained his degree in Hotel Management, including the culinary arts. His focus was on the business end of restaurants, though he said he had culinary training there, as well. Ironically, he learned to cook Chinese and “continental” food, not Indian Food. “I did six months in a kitchen and didn’t know how to cook Indian food. I can take a live turkey, clean it up, roast it, and serve it, but I couldn’t cook lentils, which is a basic Indian food.

He had intended to work a couple of years, build his resume, and return to India, but found he liked living here. After several years decided he wanted to own a place of his own, moving to Alabama in 2014, eventually opening restaurants in Birmingham and Montgomery. His final restaurant there was in downtown Birmingham, and he sold his shares to return to Knoxville as the pandemic began, with the intention of opening a restaurant here.

He did so quickly, opening Aroma India Kitchen on September 15, 2020. Planning an expansion from the beginning, he soon set his sights on downtown Knoxville for the stream-lined version of the restaurant. When a partner bought the building at 143 South Gay Street and had room for his concept he knew he’d found his spot.

In the interest of professional research, we got some take out food and investigated. While we are in no respect experts on the subject, we’ve enjoyed some great Indian food along the way, and I must say we were very pleased. We enjoyed it all, but really loved the Gosht Martaban Lamb and the Kalimiri Dahi Chicken, both of which, as bowls, should be available in the new location. The Naan was delicious and I could eat my weight in Kurkuri Bhendi any day.

The new spot will have indoor seating, but is not full service. He described it as similar to the Chipotle concept, but with Indian food. Diners will be able to build a wrap with their choice of ingredients, or to order a bowl. He’s also adding steak to the meat options, but vegetarian and tofu options are available. Saffron and white rice will be available along with chick peas and red beans. He’s also have “Indian street corn like we get in monsoon season. It is roasted corn instead of plain corn.”

He said the space is under construction, including a kitchen and grease trap, but will be at least six weeks or more before it is ready, so a December opening is likely. Look for a grand opening around that time. The restaurant will be open seven days a week serving lunch and dinner. He said breakfast is even a possibility for later, as is beer, but they aren’t starting with alcohol. “If this takes off, if people really like it, we are planning to open multiple locations.”

“It’s Indian, but it is different Indian. We’ll use our spice and my recipes, but we’ll serve it western style.”