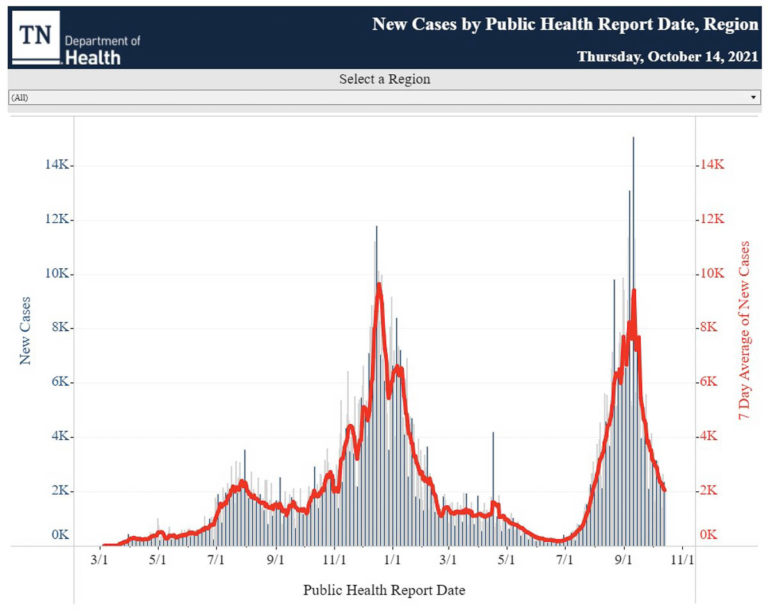 This week’s report comes to you with continually improving numbers in almost every category from International down to local. It’s a moment for hope, but we also have been here before.

The questions presenting themselves now include how low can we get case, hospitalization, and death rates? Will there be another surge and if so, will the surges peak at levels lower than the previous surge? How can we more efficiently and quickly vaccinate poor countries? How can we convince the large percentage of people in our country, state, and county, who have so far resisted, to get vaccinated so we can get off this merry-go-round?

Assuming the now weeks-long decline in the impact of the virus continues, I will conclude my reports on October 29. Should the need arise, I will resume.

International cases and deaths continued their decline, though the rate of decline was slower this week. Cases were down 4%, while deaths were down 7%.

According to the New York Times, “More than 3.73 billion people worldwide have received a dose of a Covid-19 vaccine, equal to about 48.6 percent of the world population.” That can lead to a misperception of the reality, however, as they add, “About 77 percent of shots that have gone into arms worldwide have been administered in high- and upper-middle-income countries. Only 0.5 percent of doses have been administered in low-income countries.”

Fifteen countries, mostly in Africa, have fully vaccinated fewer than 1% of their citizens. This number is down from 18 a week ago. The countries in the world with the lowest vaccination rates all have rates .2% or lower and include (from the lowest) Congo, Yemen, Liberia, Central African Republic, Chad, and Haiti.

Over 45.6 million cases of COVID-19 have been confirmed in the U.S. since the beginning of the pandemic, along with 741,898 deaths from the virus. The U.S. continues to lead the world in total cases and deaths. Among countries with at least 1 million citizens, the U.S. remains sixth in per capita cases, but has moved up one spot to fourteenth in per capita deaths from the virus, surpassing Belgium.

The average number of deaths in the U.S. is distorted this week by a large data dump from Arkansas, in which they reported many retroactive deaths. Including this reported data, the U.S. is averaging 1,818 deaths per day, down 6% over the last two weeks. Hospitalizations have fallen by 20% in the last two weeks. The states seeing the highest current rate of death from the virus include (from the top) West Virginia, Alabama, Idaho, Wyoming, and Florida. The states with the lowest current death rates include Rhode Island, Connecticut, Nebraska, Massachusetts, and South Dakota.

The states with the highest rate of increase in virus cases this week are, in order, Alaska, Montana, Wyoming, North Dakota, and Idaho. That said, even these states are seeing a decline in cases, except for Montana. In order, these states rank 34th, 36th, 48th, 45th, and 49th in full vaccination rates, for an average of 42nd.

The states with the lowest spread rates in the country this week are Hawaii, Connecticut, Florida, California, and Louisiana. In order of full vaccination, these states rank 18th, 2nd, 20th, 15th, and 44th, for an average of 20th.

15 states have vaccinated at least 60% of their population, the same as last week. The states leading in vaccination rates remain the same, though they are shuffled a bit: Vermont, Connecticut, Rhode Island, Maine, and Massachusetts. Connecticut and Rhode Island joined Vermont in crossing the 70% vaccination level. The states with the lowest vaccination rates remain the same: West Virginia, Idaho, Wyoming, Alabama, and Mississippi.

The state of Tennessee has reported 1,260,980 cases of COVID-19 during the pandemic, leading all states in the country in per capita cases. The state added 14,165 cases in the last week, down about 4,100 from the previous week. The current daily average of 2,043 new cases per day is down from 2,630 a week ago. The rate of spread in the state is 29th worst in the country, down ten spots from last week, with a 42% decline in cases over the last two weeks.

15,769 Tennesseans have died of COVID-19, including 262 this week, a drop from 358 reported last week. The state is averaging 38 deaths per day, down from 51 a week ago. Tennessee ranks 21st in per capita COVID-19 deaths since the beginning of the pandemic, the same as last week.

COVID-19 hospitalizations continue their decline, with 1,575 hospitalizations reported across the state, compared to 2,022 a week ago and the peak of 3,831 on September 9. 511 COVID-positive Tennesseans are in ICUs, and 359 are on ventilators, down from 627 and 437, respectively, a week ago. Pediatric hospitalizations, locked in a range for a bit, dropped significantly this week to 25 COVID-positive pediatric hospital patients state-wide. There were 39 a week ago.10 are in ICUs and 7 are on ventilators. At 10%, ICU availability is the highest it has been recently.

The pace of testing has slowed in the state, with about 15,000 tests reported yesterday. For the day, the state reported an 11.1% positive test rate, up slightly from the 10.38% reported a week earlier, and still about twice the target rate. Johns Hopkins University has the state at 14%. Tennessee remains ranked at 39th in per capita testing among the states.

Today, the KCHD is reporting 75 newly confirmed cases and 38 probable cases. Active cases now number 1,757, a drop from 2,210 a week ago. It is the lowest number of active cases reported in the county since August 4 (1,240).

COVID-19 hospitalizations continue to decline, with the 19-hospital region reporting 327 hospitalizations from the virus, with 110 in area ICUs, and 81 on ventilators. A week ago, those numbers were 416, 125, and 99, respectively. 21 ICU beds are currently available in the region, up from 11 a week ago and the most available since early in the current surge.

East Tennessee Children’s Hospital reports four pediatric COVID-19 hospitalizations over the last week, down from five the week before. Two were 0-5 years-old and two were 12 years old or older. Of the older group, neither patient was vaccinated. As of the last report, three children remain hospitalized, with none in the ICU.

Test demand continues to drop, with about 5,400 tests reported over the last seven days. The positive test rate of 12.7% reflects a solid drop of 5% since last week. Turnaround time for results is around 1.5 days.

The pace of vaccinations has declined precipitously in the county, with 7,590 shots given this week, down from 12,033 given last week. First and second vaccination rates remain relatively stagnant, with 53.24% of Knox County residents fully vaccinated (up from 52.8% last week) and 57.4% having had at least one shot (up from 57.15% a week ago).

The Knox County Schools are not reporting this week, as they are on fall break. The University of Tennessee is reporting 28 active cases, down from 41 a week ago.