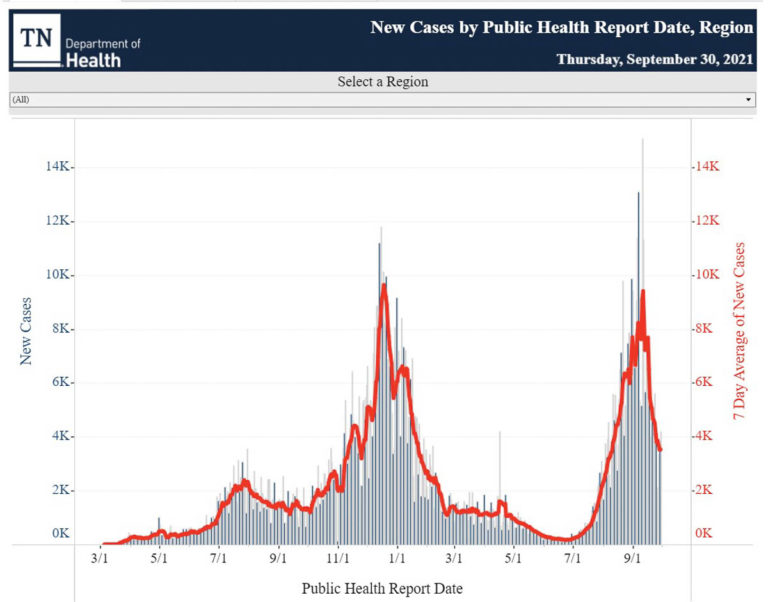 Welcome to Friday and to October. There is a lot of encouraging news to go around, from dropping numbers of new cases to declining hospitalizations. Along with our cool air we may be greeted with another window of relative calm in the COVID-19 storm, like what we experienced last spring and early summer. The number of cases and deaths in this wave appear to be lower than the worst previous wave, so perhaps we’ll see increasingly smaller outbreaks in the future.

Following declines in recent weeks, the global rate of new cases dropped another 9% this week, along with an 8% decline in international deaths reported.

About 6.24 billion doses of the various vaccinations have been administered, including about 180 million in the last week. This reflects a drop from the 250 million the week before and is a continuation of a wildly uneven pattern week-to-week. Fifteen countries have fully vaccinated 70% or more of their population. Eighteen additional countries have fully vaccinated at least 60% of their population. The top five countries in the world for full vaccination rates are Portugal (84%), U.A.E. (84%), Malta (84%), Singapore (79%), and Qatar (78%).

Twenty countries, mostly in Africa, have fully vaccinated fewer than 1% of their citizens. This number is down from 22 a week ago. The countries in the world with the lowest vaccination rates all have rates .2% or lower and include Central African Republic, Chad, Benin, Haiti, Yemen, Turkmenistan, and Congo.

Over 44,315,000 cases of COVID-19 have been confirmed in the U.S. since the beginning of the pandemic. 716,849 deaths from the virus have been confirmed. As it has from early in the pandemic, the U.S. leads the world in total cases and total deaths. Among countries with at least 1 million citizens, the U.S. currently ranks sixth in per capita cases and sixteenth highest in deaths, both unchanged from last week.

There are 9.88 million Americans with an active case of COVI-19, up about 80,000 from last week. While this number persists at the highest level it has reached during the pandemic, it will drop quickly in coming days, if new infections continue to decline.

COVID-19 deaths in the U.S. have also begun a decline, following recent drops in cases. The U.S. is averaging 1,927 COVID-19 deaths each day, down from 2,036 a week ago and down about 2% over the last two weeks. In a very encouraging shift, hospitalizations have also fallen by 17% in the last two weeks. The states seeing the highest current rate of death from the virus include Alaska, Idaho, Alabama, South Carolina, and West Virginia. The states with the lowest current death rates include New Hampshire, Maine, Delaware, Massachusetts, and New York.

The states with the highest rate of increase in virus cases this week are, in order, Alaska, West Virginia, Montana, Wyoming, and North Dakota. Alaska has nearly twice the rate of the next state down the list and has seen a 75% increase in the rate over the last two weeks. In order, these states rank 32nd, 50th, 35th, 49th, and 45th in full vaccination rates, for an average of 42nd.

The states with the lowest spread rates in the country this week are Connecticut, California, Maryland, New Jersey, and Illinois. In order of full vaccination, these states rank 2nd, 15th, 7th, 6th, and 24th, for an average of 11th.

Over 392.9 million doses of a COVID-19 vaccination have been given in the U.S., including over 4 million in the last week. After declining for several weeks, the rate of vaccinations is seeing a current up-tick, likely because of the new mandates being issued by the federal government, some states, and some businesses and hospitals. About 727 thousand vaccines were administered per day over the last seven days, up from about 683 thousand a week ago. About 65% of Americans have gotten at least one shot, and 56% are fully vaccinated, up a percent in each category over the last week.

Thirteen states have fully vaccinated at least 60% of their population (I said “fourteen” last week, and that was an error, as I think I included Washington, D.C. in the total.). Th states leading in vaccination rates remain the same, with Rhode Island moving ahead of Massachusetts: Vermont, Connecticut, Maine, Rhode Island, and Massachusetts. The lowest states remain precisely the same (starting at the bottom): West Virginia, Wyoming, Idaho, Alabama, and Mississippi.

The state of Tennessee has reported 1,228,520 cases of COVID-19 during the pandemic, leading all states in the country in per capita cases. The state added 24,590 cases in the last week, down about 8,000 from the previous week. The current daily average of 3,527 new cases per day is down from 4,626 a week ago. The rate of spread in the state is 9th worst in the country, down a spot from last week, with a 53% decline in cases over the last two weeks.

15,149 Tennesseans have died of COVID-19, including 409 this week, a drop from 451 reported last week. The state is averaging 59 deaths per day, down from 64 a week ago and the same as the rate two weeks ago. Average daily COVID-19 deaths in the state peaked on February 6 at 135 per day but fell to just 2 per day in mid-June. Tennessee ranks 22nd in per capita COVID-19 deaths since the beginning of the pandemic.

Test totals continued to remain strong (relative to the state’s history) across the state, with over 25,000 tests reported yesterday. The positivity rate of 12.66% for the day, reflects a continued improvement, with a drop from 13.43% a week ago. Tennessee ranks 37th in per capita testing in the U.S., down a spot from last week.

Today, the KCHD is reporting 182 newly confirmed cases and 180 probable cases, numbers above the current average. Active cases now number 2,885, a drop from 4,082 a week ago. It is the lowest that number has been since August 19.

Test demand continues to drop, falling below 8,000 over the last seven days. The positive test rate of 17.1% continues a trend of slow improvement, with last week rate at 20.2%. Turnaround time for results is around 1.5 days, a number which has shown steady improvement with the reduction in test demand.

COVID-19 hospitalizations continue to decline, with the 19-hospital region reporting 494 hospitalizations from the virus, with 143 in area ICUs, and 110 on ventilators. A week ago, those numbers were 621, 170, and 127, respectively. Only 13 ICU beds are currently available in the region, down from 23 a week ago and, assumedly, reflecting demand from other illnesses. 170 of the 300 ICU beds currently in use is occupied by a patient with COVID-19.

East Tennessee Children’s Hospital reports ten pediatric COVID-19 hospitalizations over the last week, down from 19 the week before. Three were 0-5 years-old, one was 6-11 years old, and six were 12 years old or older. Of the older group, none were vaccinated. As of the last report, seven children remain hospitalized, with four in the ICU.

The pace of vaccinations has recently increased in the county, with 9,402 shots given this week, up from 8,045 given last week, and 7,683 the week before. 52.16% of Knox County residents are fully vaccinated, and 56.78% have gotten at least one shot. Both figures are up roughly a half percent over last week. Knox County has maintained a higher vaccination percentage than the state and, compared to state vaccinations, Knox County would rank roughly in the middle at about 26th with close to the same vaccination rate as Michigan.

The Knox County Schools are reporting 281 active cases among students and staff, down from 359 a week ago. Staff with COVID-19, however, has risen from 33 to 47 during that time frame. The University of Tennessee is reporting 47 cases, down from 77 a week ago. Both KCS and UTK are far below their peaks reached a few weeks ago.