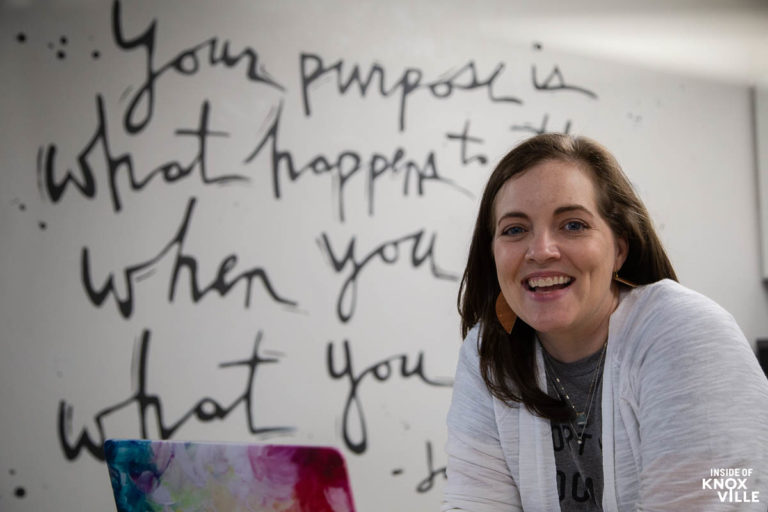 Aught, LLC, a co-working space for women entrepreneurs has opened a second location in the Langley Building at 520 West Summit Hill Drive, on the sixth floor of the Langley Building. Erika Biddix, owner and founder of the business gave me a tour of the new offices and talked to me about her journey and the vision that led to Aught.

Erika spent her formative years in Texas, though she was born in Indiana and lived a range of places, from California to Canada. She graduated from the University of Missouri with a degree in journalism and worked in advertising. She began meeting planning with the company she worked for, and it was a good fit for her skills. She planned and executed conventions and other large events, starting in 2004.

Her husband is a professor at UT in Educational Leadership and Policy Development. When he won a Fulbright in 2015, the family, now including three children, moved to Canada for a semester. “While I was there, it was a break from working an astronomical number of hours for someone else. When we returned, I tried another company for a while, but it became apparent it was time for me to do this on my own.”

She opened Biddix Meetings and Events in April 2016, as her first foray into entrepreneurship. She started working remotely with her company in 2011 and continued doing that after her family moved to Tennessee in 2011. She started the company out of her home, “literally doing programs for IBM and Amazon from a desk in my bedroom.” With that company, she plans events the company’s staff didn’t have the time and capacity to handle.

She found she missed having a community of co-workers. She operated for years without employees and only saw others in the industry on occasional trips to Nashville. She realized she missed being “out in the world,” but she knew she wanted to keep her own business. She tried to find a co-working space but wasn’t satisfied with what she found.

In July 2018, she had lunch with a woman who asked her to name her passion. Without thinking she replied, “Female entrepreneurship.” She began thinking of what she would do with that. A year later she attended her industry conference and heard Jade Simmons, the keynote speaker, say, “Your purpose is what happens to others when you do what you do.” Erika said, “In the middle of Toronto, Canada, my brain exploded, and I said, ‘I know exactly what I’m going to do, I’m going to support female entrepreneurs by providing a co-working space for them.'”

She returned home and found the Knoxville Entrepreneur Center and joined their co-starters program. She came in with her idea and launched the business before the three-month program concluded. She had a lease signed at the first west location and was moving in by August 2019.

She said what makes her model different is that it is community focused in addition to providing co-working spaces. Where traditional co-working spaces do not emphasize or necessarily make it easy to have connect with others using the space, Aught is designed to do precisely that, often resulting in cooperation and synergy between the different companies represented there.

Aught tries to replicate the comradery which develops in a traditional work environment, whether over lunch or at the coffee pot, while simultaneously propelling the women forward in their individual endeavors. The loss of a support network when women leave company jobs and strike out on their own can be difficult and Aught helps connect the women to others sharing the same work space. “Even if you don’t have co-workers, you still have colleagues and community.”

She said the idea was originally a passion project. She wanted an office and found a space where she could have thirteen other women join her to work on their own projects. The response and the growth have made it much more than a passion project. She not only opened a second location but added a manager for the business. A mural by artist Jo Simone of Milk Moon House, keeps that first original quote in front of everyone as they work.

The west location officially opened in December 2019, just months before the pandemic turned everything on its head. They closed for about six weeks but worked at keeping everyone connected. They also devoted their energy to supporting local female-owned businesses in every way they could. By the time they re-opened she said, “We had become a part of the entrepreneurial community.”

She says Knoxville is a great place for entrepreneurs. She said there was already support locally for female entrepreneurs. That said, she said that women face obstacles, such as less access to funding and not being taught to stand up and say what they need. She said it is improving, “but there is still work to be done.” The connections they form is part of power of the model.

Despite the hurdles presented by the pandemic, the original space was completely leased out after fourteen months, by February 2021. The business opened originally as “Girl Boss Offices,” and earlier this year she had to confront that the project had become a large business and she needed more space and help running it. They re-branded as “Aught,” (how they came to that choice is covered here) and began looking for a second location.

In addition to operating the two locations (the first is in the Cedar Bluff area), she is continuing Biddix Meetings and Events, while looking to stretch herself in other directions. She has a podcast almost ready to launch and will begin offering retreats for female entrepreneurs. She is working with Holly Holloway, who runs Holloway Event, Co. on several projects. If that isn’t enough, she’s also offering franchising in other cities.

She worked with Christa Rosenberg to find the second location. After looking in other areas of the city, they looked downtown, but felt they could not afford available spaces, until they found the Langley Building. She said it was a fit immediately and they signed a five-year lease. They moved in on September 1. Even after such a short time, there is one of the four private offices remains available in the downtown space and six assigned desks.

The growth in the businesses they house has been very rewarding. The conversations and connections have been exciting. “I get goosebumps every day from something that happens within these walls or is a result of something that happens within these walls.” She has watched women take their side-hustles to full-time work and others grow to the point they can hire others. Women have helped each other’s businesses grow and have formed business alliances to help each other.

She said their goal is to make the shift from home to an office affordable. Dedicated desks (no one else uses your desk) are available starting at $400 a month. That includes everything from internet, electricity, comprehensive office supplies, and printers, to snacks and coffee. Through the business, she feels she has found that purpose she was searching for. She knows she is a good meeting planner, but “it’s not my passion or my purpose. My purpose is to help change lives in the local community through entrepreneurship.