Care Cuts: Expanding the Care Beyond the Cuts 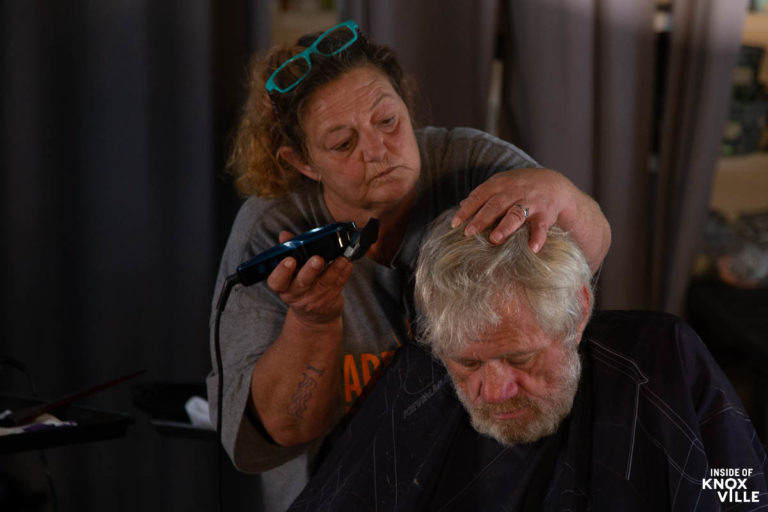 A number of readers have asked what is being done to help the homeless. The answer is: a lot. Today we look at one of the groups trying to help, Care Cuts. I first met Marti Baker almost four years ago when I interviewed her on the radio, along with other people, including Maxine Raines of Lost Sheep Ministries, and Jimmy Buckner of Scarecrow and XHunger, who were addressing the needs of the homeless. She’s still going, and the work has grown exponentially in scale. Initially offering haircuts once a week to the homeless, the work has expanded to include clothes, food, showers, and more. I visited Marti to learn about the efforts.

Where once hair was cut once a month, it became every week in 2020, moving from a barber school to GEO Hair Lab to the building behind it and utilizing what was previously a junk yard of sorts on Williams Street. While the visible effort happens on Sundays, work continues through the week with the all-volunteer organization accepting and organizing donations, as well as preparing for the next week. All work is done by volunteers and only the two police officers on duty are paid.

Anyone is welcome on Sundays. They check in and receive a name tag that identifies what they need, whether food, showers, haircuts, or other resources. The gates open at 10:00 am each morning and are greeted with coffee and food. Chairs are arranged all over the lot, some around tables, a prayer tent takes prayer requests, a shower trailer is available for showers, separate tents offer clothing for men and for women. Food is delivered and something is always on the grill.

She said they “feel like they are at home, and they want that.” She said a typical Sunday sees hundreds more gather for some portion of the services offered. Over the six years the numbers have grown. Sometimes it can be as many as four hundred.

They collect information every Sunday. She said most are unhoused, but some come from Isabella Towers and other supportive or subsidized housing. She estimates she has helped over 200 get housing and some of them return, either for help or to volunteer. She said that many get disability and don’t know that makes them qualified to receive housing. She encourages them to go through VMC and Cherokee Health to get a social worker, but many do not and she helps them find housing if possible.

The organization is a 401(c)3, registering as such six years ago. Marti said she had a lot to learn about how things work and how the pieces fit together. A hair stylist for forty years, she started by agreeing help Maxine Raines (who has since died) and Lost Sheep Ministry. Once she started cutting hair once a week, she began bringing sandwiches. Her husband offered to grill burgers. People began to make donations, some of it useful, some not. “If we’re going to be with them all day, we’re going to eat, too. And they are going to eat what I eat.”

Tim Hill owns the building including GEO Hair Lab where she worked originally on Williams Street. She began renting the front space to store supplies and donations. The Cornerstone Group at Cokesbury Methodist stepped up with a donation toward the rent, and others followed. They began operating out of the building at the rear, on property that is owned by the Clayton family, and re-adjusted. A sponsor donated a shower trailer, allowing them to shower and shampoo before getting a haircut. They are called one at a time to enter the building for their haircut.

Then the pandemic hit, and they closed for three weeks. She set up services at the gate so they could walk by and get food, water, maybe some socks, Band-Aids, or other needs. This continued for a year. Beginning March of this year, they re-opened the gates while remaining largely outside and trying to maintain social distancing. They offered a COVID-19 shot clinic and she said more than fifty got the shot through them, first with the help of the KCHD and next through Cynthia Finch, a local nurse. It was just this year that the gathering started to be once a week.

She said that some of the local homeless population arrives by bus — supporting an often-repeated local anecdote. Unlike the usual story of other cities sending them here, however, she said that when they leave the Tennessee correctional system, they are given a bus ticket to the city of their choice, and many choose to come here. “My daddy did time in a federal penitentiary, so I’m not scared.” She’s gone as far as taking some individuals home, putting one in a camper on her property, until they are reunited with family or find some other support.

One of the problems as they are released from prison is that they have no ID. “I put them in my car, and I take them to the DMV.” One she mentioned working with was “Ed,” who she helped get an ID. He volunteered for four weeks. She helped him get a social security card. She helped him first get day work, which is organized through her Sunday events, then a room in a hotel (funded for one week through her sponsors) and, finally, a job at a pallet company that he could walk to.

She said he plans to pay the money back and Marti said if he does, she’ll save it for him and help him buy a car. She wants to help them help themselves. She doesn’t want to continue feeding them week-after-week and maintain a dependent relationship. Many of them begin to volunteer, setting up and serving others. There are currently 25 or more helping make the Sunday events possible.

She said they want normalcy. “They are just looked over. Nobody wants to be an addict. Nobody wants to be homeless.” She said some are simply mentally ill and can’t function on their own. She said many can’t manage their medication and, as a result, some supportive housing doesn’t work for them. One has lived with her for six years and works with her at her salon.

Mary Katherine Wormsley, a member of the board and and Managing Broker with Hatcher-Hill, said mental illness impacts many families, but the difference in whether that mental illness will result in homelessness is often having a support system. Prayer requests are taken each week and she shared some those recent requests: “I want a new life again.” “Pray for my mental health. Pray for my decision making.” “I want a new life, again.” “I have a prayer request for my health issues to go away.” These are taken in a box in a Prayer Tent each week. She said, “These are people who are hurting.”

She would like for the location to become a day center. Mary Katherine said if they are not in a program, they have nowhere to go. Marti added, “We want to get them into programs. What we do on Sunday, I want to do Monday through Friday, 8:00 am to 4:00 pm.” They don’t have the staff or the money to do that, yet.

She partners with the Lion’s Club to get them glasses. She’s helped others get wheelchairs. She told the story of Patrick, who she helped get housing. (She estimates she has helped more than 200 people find a place to live.) He moved in one week and lost his leg the next week due to disease. He couldn’t leave the hospital without a wheelchair. She eventually connected with “Sparks” and got him a wheelchair. She later helped him get an electric wheelchair and he volunteers on Sundays.

She has a day employer, Nick with Hirequest who comes every Sunday and helps sign up workers. Another person, Randall, who employs 22 homeless people who arrive at 3:30 in the morning to ride CAC buses to work. They allow some people to store their belongings there so they can work without worrying about what they own.

She’s not happy with the current situation on the streets around downtown. She talks about the victimization, but she also feels there needs to be more enforcement. “I know we don’t have enough policemen, but if you could stagger them here, and here, and here, you wouldn’t see it?” She rails about a man who had a recliner on the sidewalk on Broadway. “That is totally unacceptable . . . We can’t have that in our city. I was born and raised here. This is unacceptable to me.”

She said there are too many people who simply give things to homeless people, and it doesn’t help them change their situation. “There’s two sides to me. I love the homeless, but this is my city. I was born and raised here, but this, to me, is a disaster, this tent city. It’s unacceptable. We’ve got to get them off the street. When I go speak at Aveda School and I can’t even get in the door for them laying on the street, this is unacceptable.” Speaking of those sleeping in downtown doorways, she said it shouldn’t be allowed. 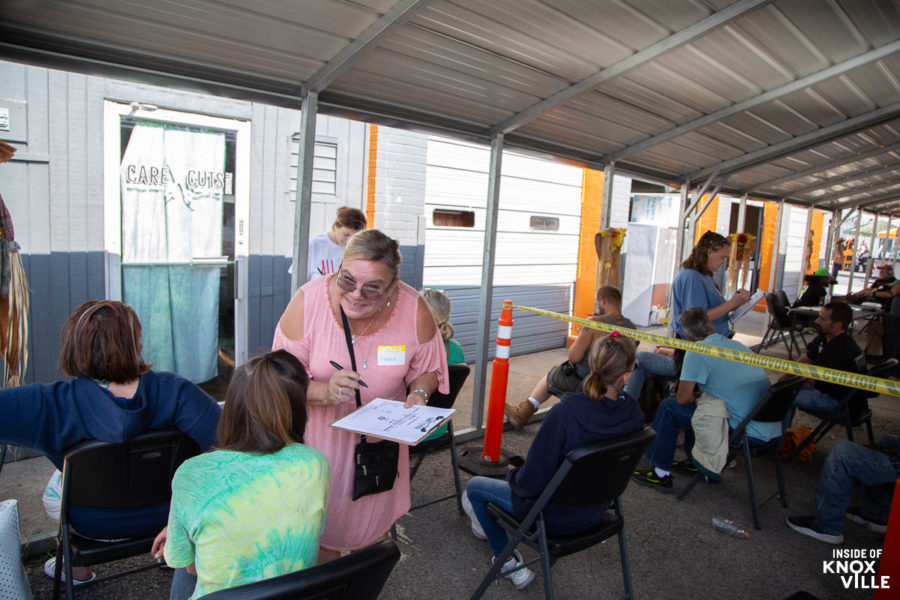 She said Chilhowee Park should be the site for a barracks that welcomes anyone, and they should be told to go there and that they are not allowed to sleep on downtown streets. “We need a disaster center for homeless people. A temporary shelter with compassion and love involved. Something for them to do and officers on duty. A supervised campground, and here’s your resources.”

She said when a person comes to her after receiving a haircut, a shower, and clothes, and says, “Miss Marty, I don’t look homeless anymore,” she knows she’s done her job.