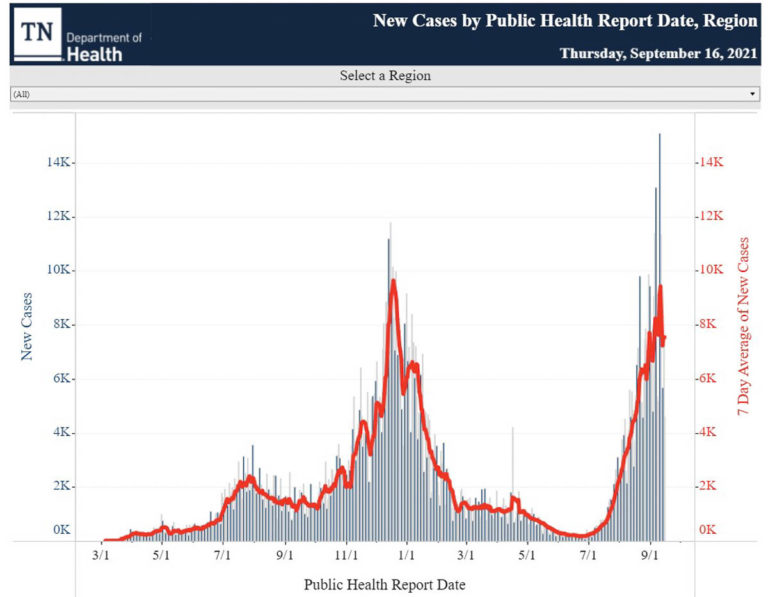 As we work our way through the current surge, international metrics are looking better, while national metrics are showing signs of plateau. Tennessee and Knox County continue to experience major impact from the virus. What has become very clear is that we do not have high enough vaccination rates to stop the next surge, ensuring that, short a sudden national, state, and local determination to get vaccinated quickly, or a miracle, the pandemic will continue into 2022.

The good news globally is that, while still very high, the rate of both new cases and deaths continued the decline discussed last week. Cases declined another 8% and international deaths declined by 3%, after 9% declines in each category last week.

Over 42,600,000 cases of COVID-19 have been confirmed in the United States, as well as 688,000 deaths. The United States has, by far, the most cases and deaths during the pandemic and continues to add to those leads each week. In per capita comparisons to populous countries (over 1 million), the U.S. ranks sixth in cases (down one from last week) and 18th in deaths.

After the rather sharp decline in cases last week (12%), we seem to have hit a pause. Perhaps we’ve undermined what would have been a continued decline by Labor Day gatherings, football games, and resumption of school. In the past, when the world numbers have trended down sharply, the U.S. has paralleled that decline. It is still possible that will prove true this time, as the current number of new cases has declined by 9% if you look at the longer two-week period.

The U.S. is now averaging 1,969 deaths per day, up dramatically from last week’s 1,579. If the decline in cases persists, it would be logical that deaths would slow over the next weeks. One encouraging note is that hospitalizations have declined 5% in the last two weeks. States leading in death rates this week (per capita) are, in order, Florida, Mississippi, South Carolina, Idaho, and Louisiana. States with the lowest death rates this week are Connecticut, Nebraska, Minnesota, New Hampshire, and New York.

Just over 383 million doses of a COVID-19 vaccine have been given in the U.S. I incorrectly reported a higher number last week, which was the number of doses delivered to states, but only 83% of those doses have been given. The number of doses being given has declined in the U.S. over the last two weeks, from about 950,000 per day to around 775,000 per day. 63% of Americans have gotten at least one shot, while 54% are fully vaccinated.

Twelve states have fully vaccinated at least 60% of their population. Vermont, Connecticut, Massachusetts, Maine, and Rhode Island lead in the percentages fully vaccinated, the same as last week. The lowest states have shuffled a bit (starting at the bottom): West Virginia, Wyoming, Idaho, Alabama, and Mississippi. (Ed Note: Alabama, my home state, jumped from 50th to 47th! Go Bama! Now just the fourth worst state in the union by one metric!)

The state of Tennessee is reporting 1,171,722 cases of COVID-19 and leads the country in per capita cases for the duration of the pandemic. 52,177 cases were added to the total over the last seven days, including 4,432 yesterday. New cases are averaging 7,495 each day, down from 7,756 a week ago. Tennessee has the second-highest rate of spread in the country and that rate has increased 4% over the last two weeks. Last Saturday the state set a new record for cases reported in a single day at 15,411. The previous record set December 16 was 11,787.

Test totals continue to hover below 20,000 per day and were under 17,000 yesterday, well below testing peaks earlier in the pandemic. The most recent positive test rate reported was 18.94%, an improvement from 21.1% reported a week ago, but still nearly 4 times the rate we need to see. The state continues to rank 35th in per capita testing among the states.

14,289 deaths have been attributed to COVID-19 during the pandemic, including 410 in the last week, and 65 reported yesterday. 127 deaths were reported in a single day on September 14, the largest single-day total since February 6 (203). Deaths are now averaging 59 per day, up from 46 deaths per day a week ago. Average daily COVID-19 deaths in the state peaked on February 6 at 135 per day but fell to just 2 per day in mid-June.

Statewide, COVID-19 hospitalizations have declined over about the last 8 days, from a peak of 3,831 on September 9, to 3,538 as of yesterday. With new cases also down slightly from last week, perhaps the downturn in hospitalizations will be sustained. Of those currently hospitalized with the virus, 1,039 are in ICUs and 769 are on ventilators. Pediatric hospitalizations also continue to decline, from 60 last week, to 40 currently. ICU capacity in the state remains strained, with only 5% of beds available, or 107 beds across the state, down from 118 available a week ago.

43.6% of state residents are fully vaccinated and 51.4% have gotten at least one shot, up from 42.7% and 50.7%, respectively, last week. The state ranks 42nd among the states in full vaccinations. The numbers continue to improve, though the vaccination rate is lower than just a few weeks ago, with 112,700 vaccinations given in the state in the last seven days, up from just over 105 thousand last week, but well short of the over 139 thousand the week before.

The number of active cases continues to bounce a bit from day-to-day, but now sits at 5,850 in the county, up from 5,136 reported a week ago. The pandemic record for new cases was set this past Monday at 6,555.

Testing demand continues to be high, at about 14,000 tests per week, while return times are roughly four days. This is very problematic because if a person doesn’t test until their third day of symptoms and doesn’t get the result back for four days, at which point (optimistically) the health department begins contact tracing, by the time that person’s close contacts are reached, they have possibly exposed others for days before they could possibly begin quarantine. Our best hope at this time is for people to contact others as soon as they experience symptoms. According to the state, our positive test rate is 22.5%, up from 19.2% last week and 5 1/2 times the target rate.

In the 19-hospital regional area, 715 COVID-positive patients were currently admitted, including 180 in ICUs, and 142 on ventilators. These numbers are down slightly from last week, except for ventilated patients, when reported cases for each category numbered 728, 181, and 131. There are 26 patients awaiting testing, including 5 in the ICU and 4 on ventilators. Of the 317 ICU beds in the region, eight are available. Of the total ICU beds, 60.1% are occupied by COVID-positive or COVID-pending cases.

The latest report from UT Hospital indicates 164 current COVID-positive hospitalizations, down from 167 reported a week earlier. There does appear to be a “flattening of the curve,” for new hospitalizations over the last two weeks, though at a very high level. UT Hospital reports 87% of these patients are not fully vaccinated. The average age of those in intensive care is 53 years old. Covenant Hospitals are reporting 356 COVID-positive patents, down from 361 last week. The average age of COVID ICU patients is 56, with an eye-popping 96% of COVID ICU patients unvaccinated.

East Tennessee Children’s Hospital has seen some decline in COVID in-patients this week, beginning after some delay, to mirror the drop at the state level. 21 children were admitted to the hospital with COVID-19 this week, compared to 23 the week before. Of the 21, six were 0-5 years old, five were between the ages of 6 and 11, and 10 were 12 years old or older. By the date of the report 8 remained hospitalized, including 3 in the ICU. None of the ten children eligible for the vaccination had been vaccinated.

The county’s vaccination rates continue to improve only incrementally, 50.64% fully vaccinated and 55.8% at least partially vaccinated, up from 49.84% and 55.21% last week. 7,683 shots were given in the county this week, despite a vaccination effort at the UT game and a special vaccination event by the county. Two weeks ago, there were 10,349 shots given.

Knox County Schools began offering a dashboard by school, after parent demands, with ranges of numbers of COVID-19 cases listed for each school. The county law department opined that specific numbers should not be given for the schools, even though many school systems across the state report it that way. The school system currently reports 442 active cases, including 390 students and 52 staff members, down from 485 total reported last week. They have acknowledged that their numbers are inaccurate and under-reported.

The University of Tennessee is reporting 157 active cases among students and staff, down from 202 reported last week. The reported number has been steadily dropping since the end of August.