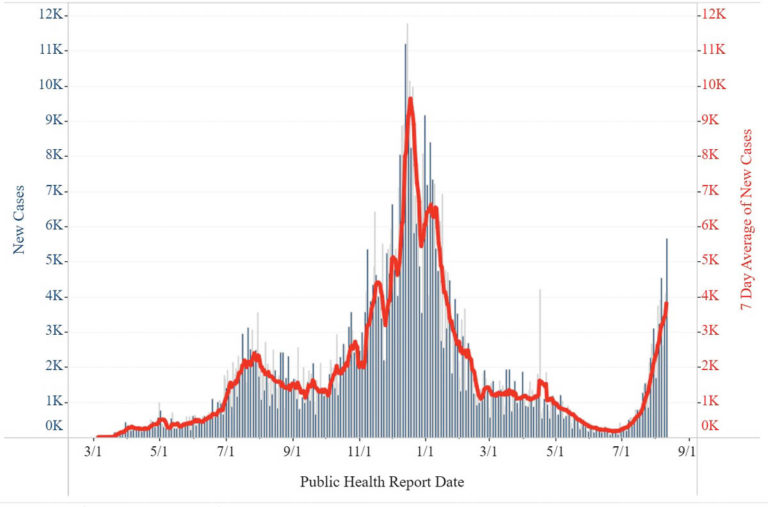 Here’s the second update since my return. The return came, of course, because the numbers are once again trending in the wrong direction. I wish I could say I pulled the trigger too fast and things have stabilized or are getting better. They haven’t and they aren’t. I will continue to allow comments this week on the website, only, and only so long as I feel it is constructive.

About 206,600,000 cases of COVID-19 have been confirmed in the world, including about 16,900,000 currently active cases. There were more than 4.5 million new cases in the last seven days, up from 4.3 million the week before, for an increase of 4%. Over 67,000 deaths from the illness were reported, an increase of about 3% from the previous week. Total deaths now number almost 4.4 million.

Deaths have risen more slowly than cases, likely because so many in the most vulnerable populations being vaccinated (vaccination rates are 70% to 80% among seniors). An average of 537 people are dying each day in the U.S. from COVID-19, up from 440 per day a week ago. The rate of deaths is like late May after dropping as low as 240 per day in early July.

Louisiana, Florida, Mississippi, Arkansas, and Alabama, in order from first to fifth, continue to have the highest rates of increase in the country. The states rank, in order, 46th, 23rd, 49th, 45th and 50th in full vaccination percentages. The five states with the lowest infection rates are New Hampshire, Pennsylvania, Maryland, Maine, and Vermont. Regarding full vaccination rates, these states rank 8th, 19th, 6th, 3rd, and 1st.

Tennessee currently has the 7th highest infection rate in the U.S., and it has risen 119% in the last two weeks. Two days ago, the state reported 5,669 new cases for the day. It was the largest number of new cases reported in a single day since January 16. Our positive test rate has gone up further to 16.5% as of yesterday.

After averaging as low as two deaths per day in mid-June, the state is now averaging 16 deaths per day, like the beginning of April. The state reported 41 deaths on Tuesday, the most reported for a single day since March 24 (45).

Hospitalizations continue to increase rapidly. There are currently 2,078 COVID-positive Tennesseans in the hospital, with 604 in ICUs and 240 on ventilators. Just last week those numbers were 1,499 in the hospital, 456 in the ICU, and 235 on ventilators. Pediatric COVID hospitalizations have increased from 28 a week ago, to 50 as of yesterday afternoon. During the same period child ICU COVID patients rose from 8 to 13, while the number of ventilated COVID-positive children dropped from 8 to 4.

The state does not display historical data for hospitalizations further back than three months, so I looked back at my own reporting for a comparison to some of our worst numbers. On January 30, I reported the numbers as 1,886 hospitalized, 522 in ICUs and 311 on ventilators. These numbers were better than those seen earlier, so it appears our hospitalization rate is like, but a bit higher than late January. ICU beds had 8% vacancy last week and have 7% vacancy this week. Our positive test rate has gone up further to 16.5% as of yesterday.

Tennessee’s vaccination percentages continue to creep upward, with 46.4% having at least one shot and 40% fully vaccinated. These numbers are up from 45.2% and 39.5% respectively a week ago. The state ranks 43rd in first vaccinations and 42nd in fully vaccinated totals. The encouragement continues to be in the number and trends on vaccinations. Over the last week, about 100,300 vaccinations were give, compared to 90,000 the previous week. To make adequate headway to prevent another surge in the winter, we’ll likely need to improve upon and sustain the pace.

The chief medical officer in middle Tennessee says it is “impossible” to find empty ER and ICU beds. She said the number of hospitalized COVID-19 patients has gone from 200 to 2,000 in six weeks. Seventy-three of Tennessee’s House Republican Caucus have formally requested a special session to “take action against the authority of local officials looking to impose COVID-19 safety measures.” The Daily Beast profiles Tennessee state representative David Byrd, one of the signers of the above request who, himself, spent 55 days on a ventilator with COVID-19 and ultimately had to have a liver transplant.

Governor Lee has addressed the growing conspiracy theories that grew from his recent executive order authorizing the National Guard to continue to be available to help with COVID-19 vaccinations and health efforts. Apparently, this mostly benign extension of a previous order led to so many conspiracy theories, the governor felt a need to set legislators straight. “One said the order meant the guard would round up unvaccinated citizens and take them to quarantine camps, which is false. Others said Lee was laying the groundwork for permanent lockdowns, which is not true. Yet another said vaccines are being given to livestock so it will vaccinate citizens when they eat meat, which is false.”

After months of once each week updates on COVID-19 numbers, the Knox County Health Department is increasing the updates to two each week on Tuesdays and Thursdays (here), but have no plan at this time to resume the press briefings held in the early months of the pandemic. I will continue weekly updates on Friday.

The Knox County Health Department reported on Wednesday that 44,880 Knox County residents have been diagnosed with COVID-19, an increase of 879 from the previous week and an average of 126 cases per day, up from 80 cases per day one week ago. It is also important to note that probable cases are increasing rapidly, probably as families with one positive diagnosis get sick and simply report, but don’t bother to get tested. There were 351 probable cases added this week.

There are 1,819 active cases, up from 1,240 a week earlier. This reflects the largest number of active cases since February 8 (1,847). Active case numbers in the county fell to 76 just seven weeks ago.

In the 19-hospital regional area, 333 COVID-positive patients are currently hospitalized, with 96 in ICUs, and 46 on ventilators. A week ago, those numbers were 233 hospitalized, 67 in ICUs, and 22 on ventilators. Two days ago, a report was issued stating there are only 5 ICU beds available in the region. With an increase from 67 to 96 of just COVID-19 patients, the trend will have to change, or we will be out of ICU beds very soon.

There were six deaths from COVID-19 in Knox County this week, the most of any week since last April. Unlike previous waves of the pandemic, the deaths are no longer focused on the oldest age groups, as they are much more heavily vaccinated than other groups. Those who died this week were spread across the age groups, with two between the ages of 45 and 64, two between the ages of 65 and 74, and two 75 or older. COVID-1 deaths in Knox County now total 664. Our positive test rate is 16.3%, up from 14.6% a week ago.

Knox County Vaccination Chart (Source: Knox County Health Department)The Knox County School Board, after voting last April to follow CDC guidelines for reopening schools, voted against giving Superintendent Thomas the power to do so. In taking that stance, Knox County became the only metro county in the state, of the big four, to start school with no mask mandate in place. A Knox County teacher, out with COVID-19 within days of the beginning of school, is publicly pleading with the board to change direction on masks.

While the Knox County Schools have stated they will not maintain a dashboard reporting case numbers, as they did last year, the state is now requiring each system to report to a central system. There does not appear to be any data displayed at this early point.

A nearby school system reporting data, however, is the Oak Ridge Schools. Starting a week earlier than Knox County, and with a much smaller student population, the systems has reported 83 cases in the first three weeks, or 1.45% of the student population infected. What they do not report is the percentage of students currently at home due to having the illness or being forced to quarantine. At one of the schools, the current rate of absenteeism due to the virus or quarantines is 32%, and this not at the school with the highest infection rate.

Dr. Gray of UT Medical Center said COVID-19 hospitalization numbers could soon surpass the records set last winter. He said space and staffing are the biggest problems. “The Tennessee Department of Health reported 1,793 people were concurrently hospitalized for COVID-19 on November 14, 2020. It took an additional 53 days to reach the peak at 3,344. As of August 9, the state was once again reporting 1,793 hospitalizations. However, the acceleration is much faster than in the prior surges, and projections show it could take just 21 more days to reach that peak.”

Given the above, U.T. Hospital has announced it will delay certain non-essential surgeries. A booster trial is also underway in Knox County as boosters to the COVID-19 vaccine are being recommended for people who are immunocompromised. While over 500 colleges and Universities in the country are mandating vaccines for returning students,  Knoxville made the Baltimore Sun in an article about the ways universities are scrambling to keep their students safe in states in which Republican governors and legislators have banned vaccination mandates. Here’s the UT portion:

At the University of Tennessee, Knoxville, where the state Legislature banned public entities from requiring vaccines, campus leaders are planning a mass vaccination event at Neyland Stadium on Wednesday, the same day classes start.

On its website promoting the event, the university is offering unspecified “fun activities” as well as special behind-the-scenes access to the football stadium.

Less fun may be in store for its students who must quarantine this year, according to an announcement last week by Donde Plowman, the school’s chancellor.

“The university will no longer provide quarantine or isolation housing, meals, or transportation for students who need to isolate or quarantine,” Plowman wrote in a boldfaced warning. Students, she strongly suggested, are on their own — a push perhaps to get the vaccine, particularly since coronavirus cases have doubled in Knoxville.