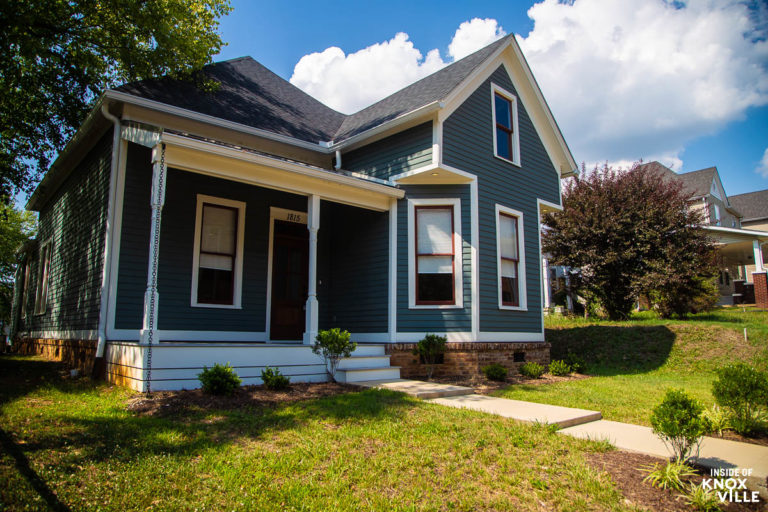 Knox Heritage has helped save a number of homes and buildings in the area. Sometimes they simply provide inspiration by listing endangered properties and others step in to do the work. At times, they have restored historic properties directly, selling them to generate funds to move to the next endangered property. In this case, they went a step further by moving a home from harm’s way before restoring it just down and across the street.

Four properties near the corner of 18th Street and Highland Avenue were listed by Knox Heritage as endangered in 2017. They were included in an article I wrote in May 2017. A small former grocery store on 18th and three homes on Highland had been purchased by Covenant Health. The properties bordered Fort Sanders Hospital and the plan for the property was unclear at the time.

Purchased by Covenant in 2008, the hospital allowed them to deteriorate (demolition by neglect) despite the fact they were protected by a 2002 agreement with the neighborhood. Covenant had announced its plan to demolish the properties and would later declare plans for a small parking garage on the corner. Ultimately, the grocery store, which had been damaged by fire, was demolished. One of the three homes was demolished and two were moved. One property became a rental elsewhere in the neighborhood and 1804 was moved to 1815 to be restored by Knox Heritage.

The home, now perched at 1815, was moved by Layman Construction and House Moving Company and was renovated by McCamy Construction Company. Within sight of its original location, the preservation of the home could not have happened without a great determination on the part of Knox Heritage and many advocates in the neighborhood. While moved from its original context, which is never a great option for preservation, the home is now a contributing presence to the neighborhood, whereas before it had been allowed to become derelict.

From the release regarding the history of the property:

Around 1900, this Queen Ann style cottage was built at 1804 Highland Avenue. Its first inhabitant was Reverend Isaac Van Dewater. Following Rev. Dewater’s departure, the home became a revolving door of inhabitants. Between 1901 and 1915 it was home to a clerk, a foreman at the Knoxville Woolen Mill, a locomotive engineer, a superintendent, a marble company engineer, and an employee at the L&N Railroad.

From 1915 until 1920 it was home to Edger T. Keisling and his family. Keisling joined the Knoxville Police department in May 1916 and retired in 1942 after 26 years of service. He rose to the rank of captain and is best known for his raids of illegal liquor establishments during the 1920s.

After Mr. Keisling, Johnathan H. Mauney moved in. Mauney was the first superintendent of Fort Sanders Hospital and would remain so until his death in 1938. Originally a native of Murray, North Carolina, Mauney moved to Knoxville in 1913 as a railroad construction foreman and later worked as a cashier for Knoxville General Hospital and Lincoln Memorial Hospital before moving into management at the latter. He accepted the position as superintendent of Fort Sanders Hospital when it was opened in 1919. Mauney was an amateur archeologist, member of Church Street Methodist Episcopal Church South, the Optimists Club, and the Masonic Order.

The story goes on for decades with the last residents being University of Tennessee students before Fort Sanders Regional Medical Center purchased the property to expand a neighboring parking garage. In 2018, the Medical Center partnered with the Knox Heritage Revolving Fund and the City of Knoxville’s Historic Preservation Fund to move the structure across the street and bring it back to life. Today, the home has a new address at 1815 Highland Avenue and continues to be part of the Fort Sanders National Register District.

Take a drive or a walk to see the home and the excellent job done by all. It’s a good reminder that there are many battles still to be fought on the preservation front all around the downtown area. Fort Sanders, particularly, struggles with the continual assault from two large organizations located in its midst. Consider becoming a member of Knox Heritage and adding your voice to historic preservation in our area.