Endangered Buildings in and Near Downtown 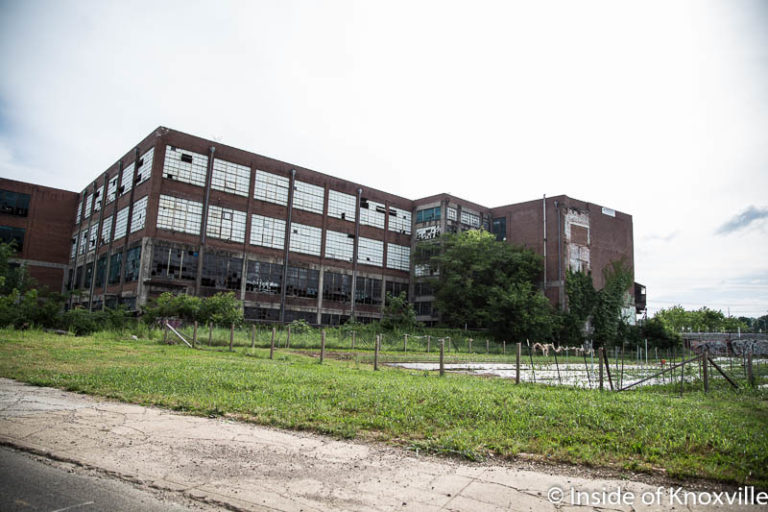 Each spring, during National Preservation Month, Knox Heritage announces its, “Fragile Fifteen.” The list highlights buildings – or sometimes areas – that are endangered. Often neglected and in need of intervention to avoid demolition or simply collapsing on their own, the list is a chance to bring the buildings, once more, into public consciousness in hopes they might be saved.

This year’s list was recently released and, as always, it contained endangered properties all over the county. While it is easy to look around downtown at our great, old buildings, now being used in new ways, we need to remember that every surface parking lot downtown represents a missing building. We need to remember that we almost lost Pryor Brown very recently and we did lose two buildings beside St. John’s Episcopal Church just a few years ago. The battle continues.

The list is generated, however, not simply to remind the public of the imperiled buildings, but also to formulate a working list for the next twelve months as Knox Heritage works on strategies and incentives to save each building or district. You can view the full list of fifteen here, along with descriptions of the properties. It is from this list that the information below is drawn. I’ll restrict this article to the downtown and near-downtown entries – minus one that, I think, needs its own article.

Topping the list this year is Standard Knitting Mill. Interestingly, it wasn’t on last year’s list. Perhaps its recent acquisition at that point by Henry and Wallace made it look more safe than it turned out to to be. It continues to sit derelict and properties owned by the company elsewhere have remained unimproved. Morristown recently invoked eminent domain to retrieve their historic college from the ownership of the same company because it was purchased only to be allowed to sit and continue to deteriorate.

According to the information supplied by Knox Heritage, “This circa 1945 building is the only remaining structure associated with Standard Knitting Mill. Standard was founded in 1900 with 50 employees. By the 1930s Standard was the largest textile and knitting mill in Knoxville, and employed over 4,000 Knoxvillians. Standard eventually produced over one million garments a week and inspired Knoxville’s title as “Underwear Capital of the World.”’

The building was once larger, operating as a textile plant under various ownership through 2007, but fire reduced its size – similar to the fate of the McClung Warehouses, which eventually burned completely – though the size remains a massive 400,000 square feet. Sitting between Fourth and Gill and Parkridge, it’s a property that seems ripe for development in the right hands.

Henry and Wallace, LLC have stated plans to rehabilitate the property and are receiving assistance through Knox Heritage to do so. As stated in their press release, “Knox Heritage encourages the owners, the City of Knoxville and other stakeholders to make the redevelopment of the structure a top priority since its currently condition is having a negative impact on the surrounding historic neighborhoods and its redevelopment will have a tremendous positive impact on those neighborhoods.”

Coming in at number four is a cluster of buildings united both by their proximity and their ownership. Fort Sanders House & Grocery – 307 18th Street, 1802, 1804, & 1810 Highland Avenue are located precisely where Covenant Health’s medical complex meets the residential portion of the Fort Sanders neighborhood. Owned by Covenant Health since 2008, they are protected by Neighborhood Conservation (for the last fifteen years), but they are currently boarded and experiencing demolition by neglect.

The structure at 307 18th Street is a, “Commercial Vernacular style building was constructed circa 1923 as the W.T. Roberts Grocery Store, but for many years has been known as the 18th Street IGA. Roberts owned and operated the store from 1923 until 1950, and afterwards it was owned by Fred McMahan, who lived on the second floor of the building. It was a viable and familiar market until the recent era of the hospital’s ownership.”

The Victorian home at 1802 Highland, was built circa 1891 for Ranson D. Whittle (1852-1932) who owned and founded the Whittle Truck and Bag Company; the Whittle Springs neighborhood is named for his family. From 1914 until 1950 William T. Roberts, owner of the 18th Street IGA around the corner lived in the house. 1804 Highland Avenue is a, “Victorian Cottage . . . built circa 1898 and the first owner was Methodist Reverend Isaac Van Dewater.”

1810 Highland Avenue, is a “Victorian style home . . . built circa 1895 for Dr. Henry Patton Coile, a prominent surgeon and physician, who lived there from 1895 until 1900. His son Samuel A. Coile, the first pastor at Fort Sanders Presbyterian Church, became the owner of the family home, and left it to become president of Tusculum College in Greeneville. Later, it was the home of Jeremiah Work, dean of Knoxville College and a Presbyterian scholar and author.”
“Covenant Health has stated its intention to demolish all of the structures in order to “clear the corner”- even though no plans for new construction have been announced . . . Knox Heritage calls upon Covenant Health to abide by the commitments it made and work with residents and Knox Heritage to restore these important properties so they can continue to be assets to the community and a transition between the institutional and residential uses in the neighborhood.”
As development creeps up Broadway, properties that seem perfect for redevelopment, but lie fallow, begin to stand out. Coming in at number six is a clear example in Sanitary Laundry at 625 N. Broadway. “The Sanitary Laundry & Dry Cleaning Building was built in 1925. V.L. Nicholson served as engineer and building contractor, using mill work furnished by Knoxville Lumber & Manufacturing Company.”
Deteriorating in place, the building is quickly becoming a hazard to other buildings around it. The city owns the property and issued an RFP which did not result in redevelopment. Knox Heritage is hopeful another will be issued in the hopes of finding an owner who will add the building to the list of those that have been reclaimed in the area. The task is made more difficult by the fact of needed contamination remediation due to the building being located on a previous industrial site.
A bit down the list at number seven is First Friends Church at 2100 Washington Avenue, in the Parkridge neighborhood. It’s easy to drive past and think its just another deteriorating home in a neighborhood which is increasingly saving them, but still has more than its share of neglected properties.
Here’s what Knox Heritage has to say about the site:
“The First Friends Church congregation was founded in 1908 . . . (and in) 1927, the congregation built this brick church, with the cornerstone of the church being laid on September 16, 1927. An early pastor, Lydia M. Hoath, was reportedly the
only woman pastor in Knoxville in 1933. The Quaker congregation remained in the church building until 1978 and the building served two other congregations prior to being sold to the current owner.

That same owner controls a number of vacant and neglected properties in the Parkridge neighborhood. The property was on the Better Building Board Agenda for Demolition by Neglect at the May 2016 meeting. The City of Knoxville boarded the property as it became an attractive nuisance for vagrants . . . The building has structural challenges that must be overcome, but its historical significance makes it worthy of further efforts to save it by either the current owner or a new owner committed to preserving it and its prominent place in the neighborhood.”

The final property from the list to be considered in this article is one I’m often asked about. At number fourteen on the list, the Greyhound Bus Station at 100 E. Magnolia Avenue is recognized as being imperiled.
The history according to Knox Heritage:
“The Greyhound Bus Station was built in 1960 and designed by Louisville, KY architect W.A. Arrasmith. Arrasmith is best known for designing over 50 Greyhound bus terminals all across the United States. The station was to be “of the most modern type” and featured air-conditioning, a cafeteria, a barber shop and a beauty shop. The exterior featured extensive blue window walls in bold aluminum framing, red brick walls and extensive interior tiling. The building reflects the modern style that evolved during the 1950s and 1960s.”
They go on to point out that Greyhound announced last year that they are interested in finding a new location. Moving the service to the transit center was mentioned as one option. Should they move – and that looks likely – the question is what happens to the building. Would a developer want to demolish the building to make a different use of the increasingly valuable property or take advantage of its mid-mod design which is so popular right now. The press release mentioned the popularity of , “The Grey, a new restaurant in Savannah housed in a former Greyhound bus station . . .
As I stated, there are additional properties on the list from other parts of town and I’d encourage you to follow the link above to explore those. I also left out one “district” that was placed on the list and is near downtown. As I walked around the former campus of Knoxville College and felt the poignancy of that site, I felt it deserved a stand-alone article.