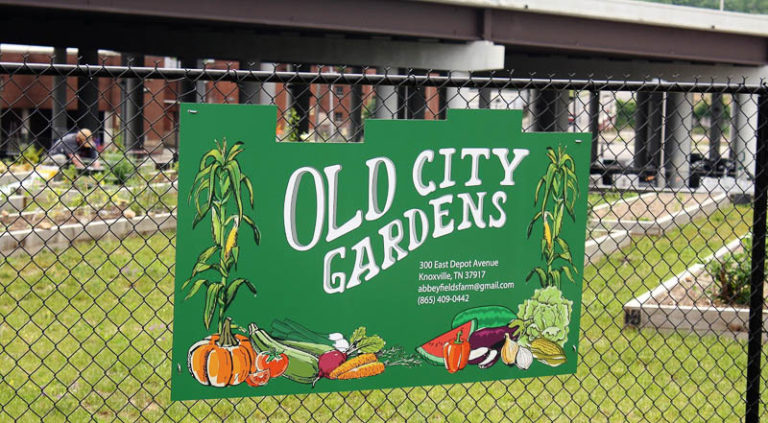 It’s been about four years since Brenna Wright took a fallow field and turned it into the Abbey Fields Urban Farm. In that time, she’s seen her share of challenges, but when a sudden storm hit the farm it took her by surprise.

On the night of April 9, a microburst thundered across Washington Avenue and onto Abbey Fields, destroying a high tunnel that was less than three months old. The storm wreaked havoc on the neighborhood. Down the street and around the corner, the Positively Living building on East Fifth Avenue was so extensively damaged that 27 residents were displaced.

Inside the 14-foot high tunnel that looks and functions like a greenhouse, the greens that chef Jeffrey DeAlejandro of Olibea had planned to use during the Rhythm N’ Blooms festivities were destroyed. Wright points to the debris that is left of the structure, but proudly shows that a lot of the greens are now thriving. Those dauntless greens serve as a good analogy for Abbey Fields. What started as a fallow field that stood in the shadow of the now vacant Standard Knitting Mill has been transformed into a culinary oasis in the middle of what was once a food desert.

The property is development supported agriculture, a DSA, and owned by developer Henry & Wallace. It’s also a typical micro farm.

“They’re big in Canada,” Wright explains. “They believe that it’s quality that is important and that bigger is not better.”

It’s all about nourishing the soil, she says. “In an urban setting, success is in the soil, in building up the soil and not depleting it. Ultimately, it helps with the yield. Per square foot, you’ll get a lot more.”

With commercial farms “everything is planted for mechanics. But we don’t use chemicals which would work to our detriment. We are not hell-bent on destroying the soil.” When a portion of the field goes fallow, she puts a few chickens on it. “They eat bugs and poop,” she says, and it brings the land back. “You don’t work against yourself.”

“And they are just cute,” she says with a laugh, referring to the handful of chickens. Abbey Fields sells to anyone that would like to stop by and purchase produce, as well.

Not far away in the Old City sits the aptly-named Old City Gardens. Wright is affiliated with that property, too. Owners Randy and Jenny Boyd rent 4 feet by 25 feet raised-bed garden plots for $100 a year to people interested in gardening, but lacking their own land for growing. The cost may seem steep compared to other gardens in the city, says Wright, but there are far more amenities. The tools in two sheds are available, along with water, security and picnic tables. Today, Mike Day is working on his garden, enhancing the soil and working on a beautification project. He lives nearby in the JFG building. “I love it,” he says, referring to Old City Gardens. There is going to be a get-together of gardeners at the gazebo on the property, a meet-and-greet plus advice offered by Wright and he’s looking forward to it. “I think it’s going to be very good,” he says.

*Heidi Hornick hails from Massachusetts, where she was a reporter for The Times of Webster and the Worcester Telegram and Gazette. She’s a freelance writer, researcher and photographer. This fall she will be managing editor of Pellissippi State’s new online magazine. She’s a single mom and a foster mother. She’s lived in Knoxville since 2005 and thinks it’s one of the best places on Earth.