Board of Health Calls Emergency Meeting 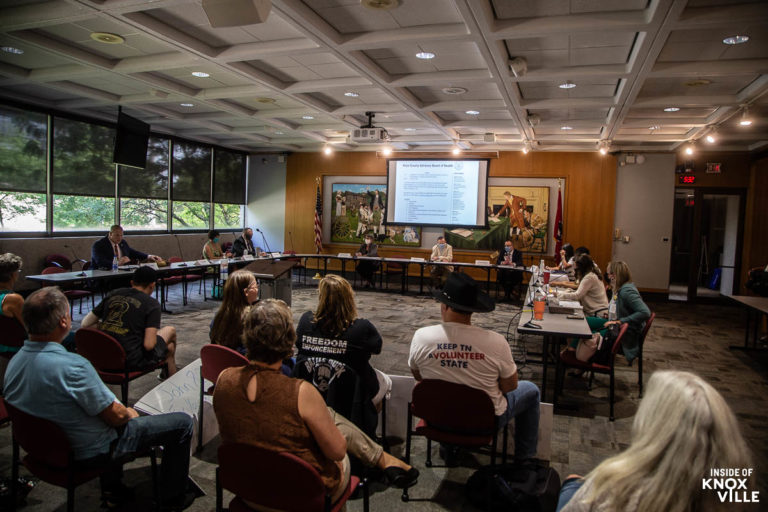 It seemed destined to be a strange affair from the beginning. The audience was comprised of about twenty anti-masker/anti-vaxxer folks who brought their signs and about three or four other people, plus press and the newly constituted advisory board. With no power to make decisions, the emergency meeting seemed only intended to provide an alert to the community: COVID cases are up, hospitalizations are up, vaccinations are not. With no public forum, the crowd sat largely quiet for the duration of the meeting.

Dr. Buchanan gave her assessment of the current situation, noting there has been a massive increase in cases this month which she attributed to gatherings in and around July 4, as well as summer vacations. As an example of the magnitude of the increase, the county was averaging about six new cases a day at the beginning of June and the day of the meeting there were 80 new cases.

She expressed concern regarding younger people who are representing a larger percentage of the new cases than was the situation previously. In fact, as both she and, later, Dr. Shamiyeh noted, there has been little to no increase in the 60+ population which, not coincidentally, is also the population with the highest vaccination rates (almost 80% for those 65 years old and older).

From data on the Knox County Health Department website, there were 202 active cases of COVID-19 on June 2. As of yesterday, there are 721, or roughly the same number as that at the end of April. During the same time frame, the percentage of county residents who have at least one shot has risen only from 45.8% to 49.7%.

She acknowledged that the board is advisory only and said that additional lockdowns like the one we had in spring of 2020 will not happen. She warned that business closures and losses are likely simply because of the increased spread of the virus. And that, she laid directly at the feet of those who have not gotten vaccinated. She pled with them to do so.

Dr. Shamiyeh, physician at UT Hospital said there has been a 925% increase in cases since June 6. Levels are still below the peaks we saw last January, but are continuing upward. The positivity rate in the county had fallen to 1.2% at the beginning of June and it is now 12.4%. District-wide (which includes Knox and several surrounding counties), hospitalizations fell as low as 20 COVID patients and is now 106.

He said that 50% of patients are now below 50 years old and the average age has dropped a decade from what we saw prior to vaccination availability. He also urged people to get vaccinated, saying it isn’t too late and the vaccines are highly effective. New vaccinations could reduce the impact of the current wave or of the next one which he expects to be in the fall.

He pointed out that FDA approval isn’t the only measure of the safety of the vaccine, but pointed to the hundreds of millions of people who have taken the vaccine, are protected, and little in the way of wide-spread side effects have been noted. The vaccines are also effective, he pointed out, against the Delta variant which carries a viral load 1,000 to 2,000 times greater than the original virus and is 60% more transmissible.

Dr. Buchanan said teams have been convened to take the vaccine to a range of groups, including church groups and employers who request vaccination events on their sites, in the hopes of increasing the rates. “If we want to stop reacting to the virus and take back control, the answer is the vaccine.” She said she isn’t focusing on new regulations, but rather vaccinations as that is our answer. She said she is concerned that new regulations would entrench the antivaccination group.

The meeting, which was scheduled to run two hours ended after less than forty minutes.

I spoke to both Ms. Wagoner, the representative of Knox County Schools and asked her for clarification regarding contact tracing. She said the schools will not conduct contact tracing as they did last year, but will leave that to the Health Department. She said any decision to follow the recommendations of the CDC and the American Academy of Pediatrics that all students and staff should wear masks would be up to the Board of Education.

I also spoke with Dr. Buchanan on the same topic and she said they will work with affected families of students to determine contacts “as best we can without the assistance of schools.” I asked if the schools would be letting them know of cases and she said that had not been clarified, but would be clarified soon.

I asked if when a child gets COVID this fall, assuming they will be in a full classroom of largely unmasked peers, would the class be sent home? She said they would take that on a case-by-case basis. She said the school system has always worked with them and she anticipates that good relationship to continue. “We’ll do our best to protect the students and the staff and if that means a classroom needs to go home, then a classroom needs to go home.”