Austin Homes to Offer Housing to a Range of Incomes, Starting in December 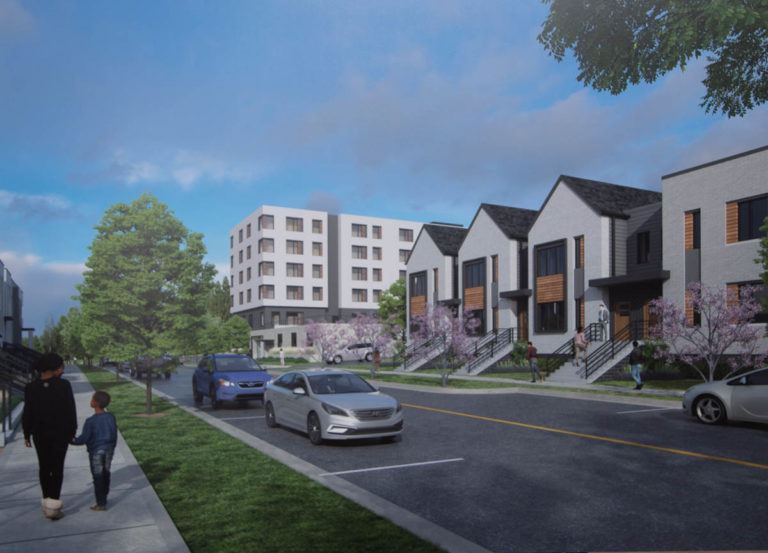 On the face of it, hiding a 23-acre, 438 housing development a half mile from the Old City seems preposterous. That said, the Austin Homes development which, to be fair, is tucked behind a hillside, is rapidly approaching the completion of phase one and, I suspect, many downtown residents are not aware it exists. A stroll from the Old City to the intersection of Summit Hill and Martin Luther King, Jr. Boulevard reveals a massive construction site just down the hill. J. A. Fielden Company is serving as general contractor.

It was originally built as a low-income, subsidized housing project in 1941. Gradually aging past its usefulness, the development had 189 units when it closed to make way for the new construction, according to Marisa Moazen, KCDC Director of Policy and Strategic Partnerships. She said the residents who were forced to move will be offered priority for the new homes as they become available.

The project is being developed in phases, though the phases are overlapping. The first phase will feature 105 units and is scheduled to open in December 2021. The second phase will add 180 units in December 2022 and the third, in late 2023, will contribute an additional 153 units. Unlike those of its predecessor, the occupants will reflect a range of income levels, up to and including the typical earnings of many downtown workers.

Regarding the mixed levels of income, Dr. Moazen explained the concept has been successfully deployed in Nashville and many other cities and is a focus for the Department of Housing and Urban Development. So much so, the department is offering grants of up to $30 million dollars to six different projects each year under its Choice Neighborhoods program.

The Knoxville Community Development Corporation (KCDC), the entity behind the current construction of Austin Homes, has applied for one of the grants for housing to be built off Western Avenue. The concept is an attempt to revitalize communities by bringing to bear a range of supportive services to fresh housing supplied for those with lower income levels. While not part of that grant program, Austin Homes is being built with a similar mindset.

After listening to former residents and nearby neighbors, KCDC identified four areas of concern and put plans in place to meet those concerns. Education was expressed as a concern and KCDC hopes to include partners offering an early learning center and affordable childcare. Dr. Moazen explained that quality childcare at any price is difficult to find in Knoxville and for low-income residents, it is particular problematic. Affordable childcare, she explained, is defined as 7% or less of a person’s annual income.

Public health and safety were also identified as areas of need, including health care options, fresh food, park space and resident safety. The group hopes to have an on-site health clinic and to attract a market or food coop. Walking trails, a playground and a dog park will be included in the final phase.

Transportation and “connectivity” were also areas of expressed concern. Bus and trolley routes are nearby, and fresh, wide tree-lined sidewalks will be included. The walk to the Old City is not a long one currently, but the addition of a greenway connection to the new stadium will make it even easier.

Dr. Moazen pointed out that the proposed stadium was on no one’s radar when the plans were laid out for the new residences. That said, it offers clear employment opportunities which do not require a car. It also fits with the final category of concern expressed by the community for economic and workforce development. They hope to include job training on site. Tuition support for the nearby Pellissippi State Community College campus on Magnolia is available through grants. 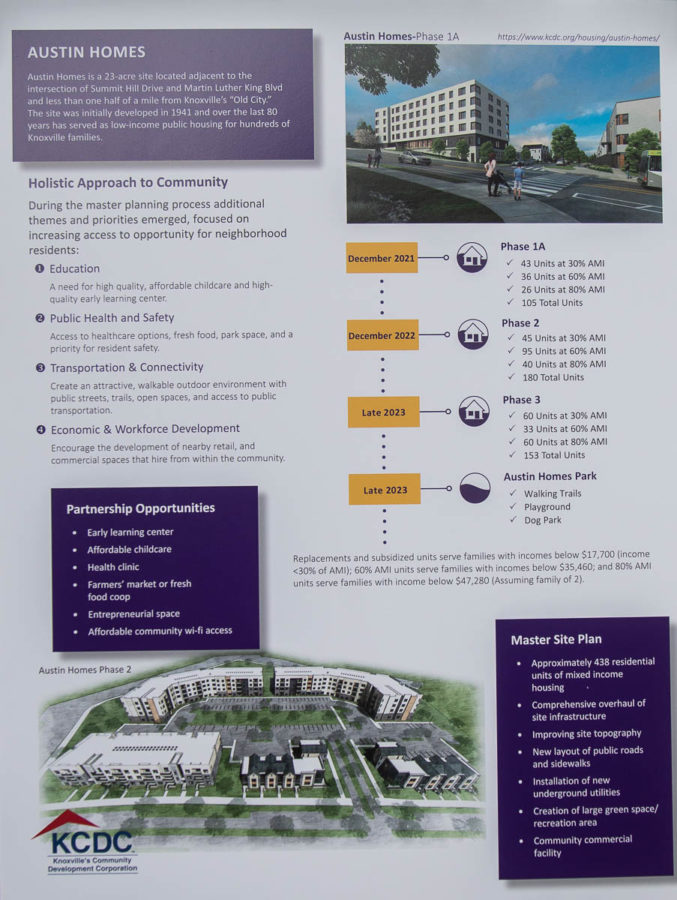 Leading up to the opening in December, a contest will be held this fall for students at Vine Middle School (just down the hill from Austin Homes) and Green Magnet Academy (just up the hill) for best playground design. An accessible park and playground will be located adjacent to the new homes with a scheduled completion date of the end of 2023.

Shifts in housing over the last seventy to ninety years have resulted in less homes and less adequate homes for lower income citizens. Boarding houses, which used to fill some of the needs, have largely disappeared. Housing became increasingly segregated by income level as suburban housing emphasized exclusivity. Developers naturally were drawn to the higher-end market.

This is an attempt to reverse some of the damage and to bring back affordable neighborhoods with mixed incomes and to provide housing for workers who make less than average in our city. It is a similar attempt to rent-control in larger cities and is a partial answer to the “work-force housing,” often expressed as a need. In any case, within the next two plus years, we will have an additional 438 homes, likely representing 900 to 1200 new residents, further impacting the downtown area.