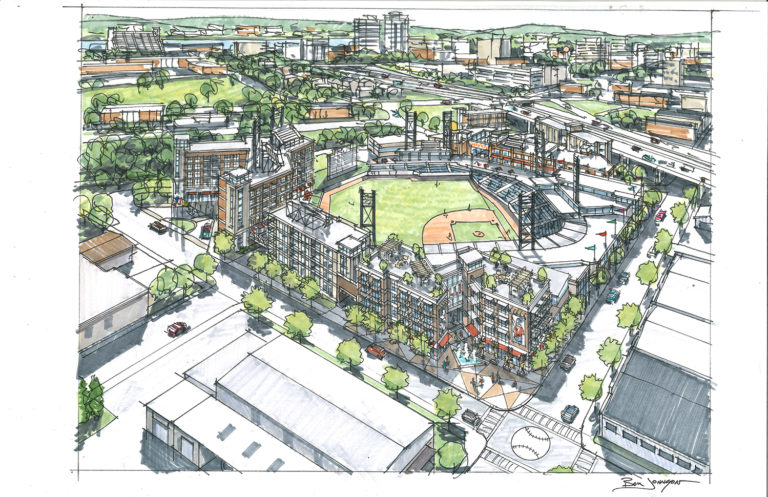 There are a number of ways to approach the conversation surrounding the concept of returning minor league baseball to Knoxville. While much of the focus has been on economics, including whether or not public dollars should be invested and whether the advertised return would be realized, there are historical precedents and perspectives also worth hearing.

Since this time last year, and in response to the death of George Floyd, Beck Cultural Exchange Center has hosted a monthly series of virtual town hall meetings exploring topics related to racial justice. Hosted by Beck President, Reverend Reneé Kesler. On the eve of Juneteenth, it seems appropriate to tune in to the conversation related to baseball in Knoxville from their most recent town hall. This panel included Robert Booker, former Director of the Beck Cultural Center and former state legislator, former Mayor and Councilman Dan Brown, Director of the Knoxville History Project Jack Neely, lifelong east Knoxville resident and educator Geraldine Taylor, and former Mayor Randy Tyree.

The title of the panel was “Urban Renewal/Removal and Baseball.” The presentation began with a brief video on urban renewal, which destroyed much of the established section of black-owned downtown businesses. It also addressed the history of Knoxville’s historic connections to the Negro Baseball League. James Beck, the namesake of the center, was also a baseball player and prominently connected to the league. The full video of the panel is included below and if you’d like to skip to this eight minute section, it begins at about the 23 minute mark. Directly below this paragraph is a longer video produced by the Knoxville History project on the topic of urban renewal.

The panelists were asked what they thought of when they heard the words “urban renewal.” They responded with displacement, relocating, change, upheaval and destruction, complication. Mayor Tyree was a police officer serving in east Knoxville and he took office just as Urban Renewal ended. He said his time as a law enforcement officer was a time focused on minor issues and that serious crime in east Knoxville was rare.

Bob Booker lived in the Bottoms, an area just east of the old city, with includes the location of the proposed baseball stadium. He said there were many substandard buildings and renewal was needed. First creek flooded often, driving residents out periodically until the waters receded. He said that urban renewal simply went too far and became a landgrab that destroyed mansions and businesses, alike.

Ms. Taylor related a story from her childhood. Her family lived in substandard housing near what would later be Walter P. Taylor Homes, but moved to Austin Homes, adjacent to the bottoms, when it was built. Her father owned a barbershop, and later a building, on Central Street. The family saved and three of the four children attended college.

When they had the opportunity, they moved into a better home just off main, near the river, another area that was impacted by urban renewal. She left for a few years to teach in another state and when she returned, the entire neighborhood was gone. She made the point that the impact wasn’t simply economic, but personal, as it erased her history and the history of many others who lived there.

Mayor Brown recounted that he grew up in “a very solid, working class neighborhood,” on east Vine. He said the housing was good, but it was all removed as a part of urban renewal. He said he has never determined a reason for their removal as nothing was ever built there.

Jack Neely recalled the era for the University of Tennessee’s destruction of mansions near its campus, often with no plan to build anything, but simply to clear the way for possible use. He said Circle Park was surrounded by mansions. He pointed out that Urban Renewal was a federal effort to improve living conditions in cities, some of which were more similar to developing nations.

While great damage was done, he said many people involved were truly trying to make things better. The creek no longer flooded. People who had no electricity or indoor plumbing, got it for the first time. It was only as it progressed that the damage became obvious. Black people were disproportionately being displaced with no where to turn.

Mr. Booker said that Urban Renewal changed the face of east Knoxville. He said city directories prior to 1963 show very few black residents in the area. He said the black population was contained mostly south of Jackson in a very small section of east Knoxville. Many of these residents were forced to move from that section to the area on Washington Pike and other places, causing many white residents to leave. A number of current African American churches in the area are located in previously all-white churches.

With no black representation in any county or city-wide offices, Mr. Booker said he worked with the housing authority and became involved in the urban renewal project and tried to help relocate those displaced. He was elected to the state legislature and tried to make changes there but was unsuccessful.

Mayor Brown said the first shortcoming of the implementation was that the community was not consulted. He called that “a great tragedy that we are still paying for today.” He said people were not paid the value of their properties, “which starts years of wealth discrimination which we are still paying for today.” By wiping out mansions, businesses and churches owned by the black community and paying far less than their worth, black Knoxville was drained of much of its wealth. He pointed out that the same wealth draining happened all across the country.

Mr. Neely echoed those sentiments and said, “it wasn’t just one generation’s pain, but it cascades.” Mr. Booker explained many families lost their home, their business and their church, with no fair payment for any of those. He said it was virtually impossible to recover and damages families over generations. They were unable to replicate the cluster effect of having the synergy of their businesses and homes located close together.

In terms of what can be done to rectify some of these past wrongs, Ms. Taylor said she would like to see the lost history and street names remembered. Jack Neely pointed out that he was long on record for advocating that James White Parkway be removed and the city street grid returned.

The proposed baseball stadium would be squarely in the area once known as the “bottoms.” Mayor Brown pointed out that some in the community are asking for a “promise” (ed.Community Benefits Agreement) that there would be community involvement, legally assured. He mentioned requiring a percentage of African American employees and contractors. Ms. Taylor said some of the businesses surrounding the park should be dedicated to African-American ownership, profiting financially from the new park.

Ms. Kesler said the local area Urban League is working with the Gem Development group and looking at job training, employment and entrepreneur support for the black community. She said the Beck Cultural Center is working with the group to ensure there is commemoration inside the stadium of the community that existed there in previous generations. She said they have been supportive. She called this a “second chance,” to make urban renewal better.

Mayor Brown said the baseball stadium won’t fix everything that is broken in east Knoxville, but it could be a start to making some parts better in terms of employment and other areas. He said he has been concerned that black people are underrepresented in professional baseball and he sees this as a possible encouragement to young African-Americans to participate in the sport.

Jack Neely pointed out that Bill Meyer Stadium, when it housed a baseball team, was one of the few places that white and black residents gathered in similar numbers. He said it offers something positive to do for young people. Mayor Tyree pointed out that an effort was made previously to bring it back, but that was set aside in favor of a focus on the convention center.

As a bottom line, Ms. Kesler asked the group if a downtown baseball stadium, in their opinion is a good idea. Bob Booker said yes, and explained, “This stadium means jobs, jobs, jobs.” He said it may mean entrepreneurial opportunities, but whether it is in management, ticket sales, grounds keeping, or other areas, people will be employed.

The others agreed. Mayor Tyree pointed to the state investment of over $13 million. He said if the community supports any brick and mortar development, it can be a good thing. He likened it to the will to bring the World’s Fair the city. Mayor Brown added that it is “good clean family fun.” Regarding the concerns about the expense to taxpayers, but he said “in the long run” it is a good thing. He pointed out that no black owned property is being damaged for this development. Mr. Neely said he feels every city should have a baseball stadium and it should be downtown.