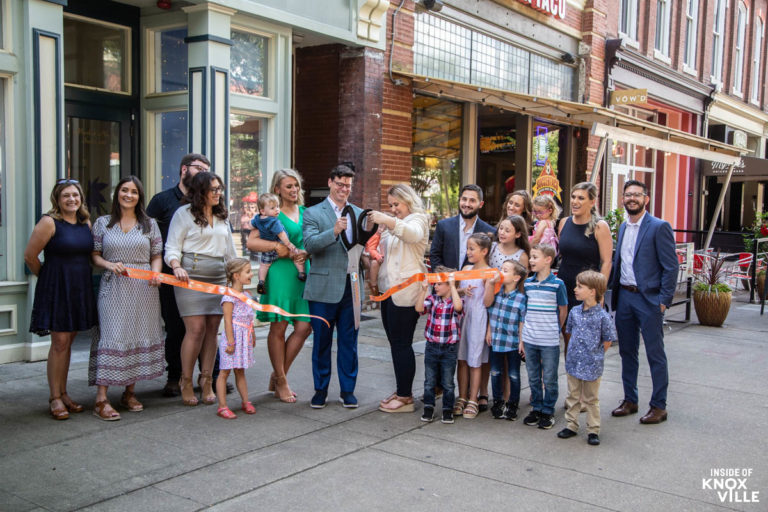 A number of small businesses have made downtown their home either just before or during the pandemic. They are not retail businesses and are not normally the focus of articles in this space, but given the unusual times, it seemed a good opportunity to take a look at businesses bucking the trends. These companies have taken office space at a time future demand for office space is being debated. Today we’ll look at two, BS+Co. and DZ Law, companies sharing adjoining suites on Market Square. They held their ribbon cutting yesterday afternoon.

BS+Co. was founded by CEO Britt Schwartz. The marketing company serves companies and has employees located across the country. Founded in 2018, the company moved to Knoxville at 9 Market Square, Suite 201 (previously occupied by Lillian Ruth Bridal which moved to a larger location during the pandemic) in early March and began renovations. Britt says it is a company with a difference. The press release says, “The introduction of the outsourced in-house model has changed the way entire companies are operating. BS+Co. embeds directly into companies while retaining the independence to provide honest and direct feedback when needed.”

Britt is originally from Fort Myers, Florida, but as a teenager, she moved to Michigan with her family. She married there fifteen years ago (she has six beautiful children who were present for the ribbon cutting) and she and her husband searched for a place with less snow and more economic potential, though she didn’t want the heat of her childhood Florida. Knoxville offered a sweet spot.

They took a trip to the area three years ago and fell in love with downtown Knoxville. The move took a couple of years to become a reality and they arrived just over a year ago. She worked at a co-working space for six months before finding the current location. She said she wanted a location and building that made the company feel like it was a part of something older.

She met Bob Dziewulski of DZ Law at the co-working space and was instrumental in convincing him to lease the adjoining suite. As their businesses have evolved, they have each used the other’s services. She notes the business, which she started in Michigan, will soon turn three years old. She had previously worked for eight years at other marketing firms. The company focuses on manufacturing, high tech, and cybersecurity companies.

While her employees are scattered across the country — her chief strategist lives in San Diego and one of the specialists lives in Florida — though she plans to build the core of the team in Knoxville and is looking for “talent.” She has already brought Courtney DeLaura on board, which she calls, “the best decision I’ve ever made.” She’s also hired two others and is hoping to add to the list.

While having most staff live in Knoxville is desirable, she says remote work anywhere in the country is not a barrier if they find the right person. She also says each strategist only works with four companies and employees work thirty hour work weeks. She said the downtown atmosphere fits their company perfectly. They are a bit edgy and the name B.S. stands for Britt Schwartz, but also represents the phrase that indicates they cut right to the work without extraneous layers of bureaucracy.

Bob Dziewulski founded DZ Law and is joined by associate Ashleigh Beer, both of whom graduated from the Lincoln Memorial School of Law. Bob had worked for another firm and Ashleigh was his clerk. She recently passed her bar exam and he invited her to be a partner in the new firm. Bob’s wife Courtney is also an attorney working with the company.

Bob grew up in Oak Ridge before moving to North Carolina for college and living there for several years afterward. He returned around 2010 launching several software startups and working for another. He attended law school and began practicing law three years ago. Ashleigh is from upstate New York, but came to Knoxville to attend law school and “fell in love the area and my fiancé and decided to never leave.”

The firm just started in January of this year. They practice what is called Proactive Law and is more common in Scandinavian countries. He recounts that he worked with several generations of families who owned businesses and eventually became “embedded” in them, helping guide their current business decisions with an eye toward legal implications for the future. They are “involved in all aspects of the directional growth of the company, including strategic direction, operational development, and legal.”

After those initial experiences, Bob felt drawn to offering that type of service to other small companies that can’t necessarily afford their own legal department. Rather than performing single specific legal functions as needed, they help companies plan for the future, helping structure franchising, strategic vision and other growth issues.

They are both excited to be in Knoxville and to be a part of downtown. Bob lives near downtown. Ashleigh said the city is a perfect size for her and she likes the “attitude.” She said the attitude she thinks is “a little bit of the New York attitude, like a little sassy, but also a little bit of that southern charm mixed in.”

They plan to keep the firm small, though Bob said there may be additional attorneys added to the team.

For more information about these new companies, check out their websites at BS+Co Marketing and DZ Law. I will have a second article introducing two additional companies, soon.