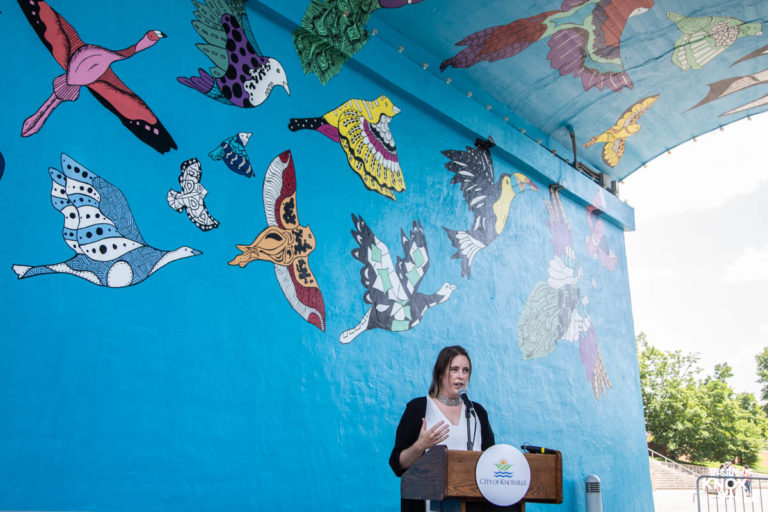 Knoxville has a new mural, located in the World’s Fair Park and painted by nationally acclaimed artist Kelsey Montague. Designed to commemorate those who were lost to COVID-19 and the suffering experienced by many, she said, “I did a piece for Parkland after the shooting, as well as other places. It makes it more emotional, but in the end it is about lifting people up.” She completed the work over the last six days and the finished product, beneath one of the arched Clinch Avenue Viaduct underpasses, was unveiled this weekend.

A small group gathered yesterday afternoon to cut a ribbon dedicating the new mural. Mayor Kincannon thanked numerous people for their help in getting us through the last fifteen months, including Dr. Buchanan and other public health workers, the Board of Health, doctors, nurses, and the many people who had to go to work to take care of the needs of the city. She expressed her condolences to the more than 600 families who lost a loved one in our county to the pandemic and said she hopes the mural becomes a place of solace for those who are hurting.

The artist also spoke and said this was a mural she had imagined some time ago and she felt this was the perfect pairing for it. She said the birds, each unique, represent our differences, but are all moving in the same direction, as can we. While the reason for the memorial is serious, she said she intends it to be hopeful.

The mural is intended to be a permanent replacement to the temporary memorial in front of the City County Building, in which a flag represented each Knox County resident who died of COVID-19. In a released statement, Mayor Kincannon said. “Our hope is that this memorial will be a place of solace and healing. It will recognize how we as a community came together to look out for one another during a public health emergency.” The artwork is intended to “commemorate loved ones lost during the pandemic as well as celebrate the brave men and women who helped us get through this last year.”

Ms. Montague has painted hundreds of bright, larger-than-life murals, drawing inspiration from butterfly wings, balloons, dragonflies, hot air balloons and heart motifs for her work. Her 2014 mural in New York City with the hashtag #WhatLiftsYou was applauded by singer Taylor Swift, who then commissioned Montague to do a butterfly mural in Nashville for the release of her song “Me!”

She has created large scale, interactive street murals in Cape Town, Galway, Buenos Aires, Hong Kong, Manchester, Nashville, Los Angeles and New York City (among many others). From her website:

Each piece provides an opportunity for people to become a ‘living work of art.’ Participants are encouraged to post pictures with the work on social media under the hashtag #whatliftsyou with the intent of making social media a kinder place. Her work has been featured and/or commissioned by Taylor Swift, Forbes, The Wall Street Journal, The New York Times, The Smithsonian and The Today Show.

The memorial mural here features brightly-colored birds flying into a blue archway, located closest to the base of the sunsphere. Her emphasis is often on including people in the work as they enjoy it. This one is designed for a person to stand near the left of the mural and the resultant photo would appear to have them releasing the birds to flight.

Dogwood Arts selected Kelsey for the project and contracted to bring her here. Dogwood Arts Executive Director Sherry Jenkins said in the press release, “Art can inspire us and comfort us, and we believe Kelsey Montague’s creation will be a special part of our post-pandemic healing.” The City will provide an agency grant to Dogwood Arts, with funding of up to $25,000 for the pandemic memorial. Shannon Herron with Dogwood Arts said they have admired her work for a long time and her name came immediately to mind for this project because of the interactive nature of her work.

Ms. Montague met with reporters via Zoom earlier this week and said, “This project commemorating those who have suffered and paying respect to that is something that drew me in. I love that anyone can enjoy it, that is public. I love coming in and becoming part of a project.”

She said COVID complicated her process considerably, as she travels most of the year. She said they had book 2020 out entirely and had to rethink how to accomplish the work. They combined numerous projects into large road trips and said she is thankful for the additional time she has had with family. She travels with her sister, Courtney, who is the Operations Manager, making it all come together.

Noting this is her first “reveal” in Knoxville, she said she loves Tennessee and is happy to get to know our city. “Interactive murals are what drives me,” she said. “At the end of the day, I want people to have a ‘moment.’”

Here’s a look at the moment Kelsey learned she had completed a mural commissioned by Taylor Swift (She was told it was for ABC and ESPN as a part of the NFL draft.)