Friedman’s Loft: One of Downtown’s Most Stunning Homes is Available For Rental 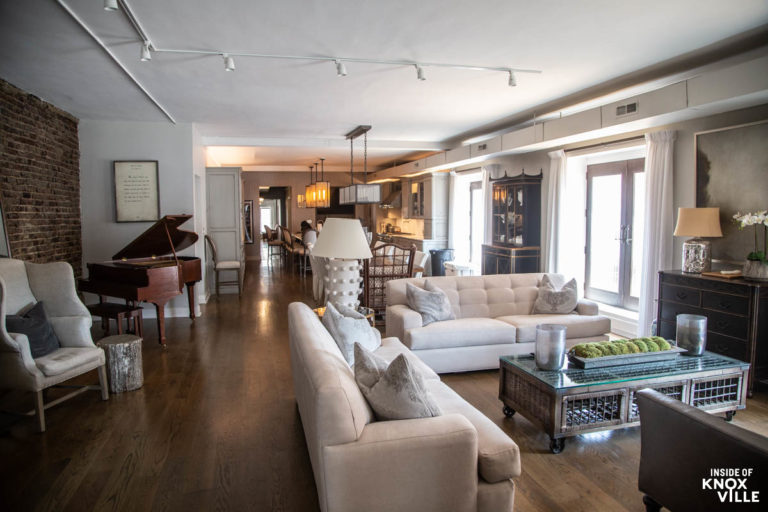 304 South Gay Street, Knoxville, May 2021
Josh Smith recently purchased the building at 304 South Gay Street. The building, now named “Friedman’s Lofts,” features a basement and three stories, with the dental office of Ethan Long located in the front half of the first floor. Two floors were updated with fine details by previous owners Buzz and Trish Nabers, who purchased the building in 2011 for $1.13 million. They sold to Mr. Smith in September 2020 for $2.8 million, who has added an elevator and major finishes to the rear of the first floor and the basement.
According to the excellent Knoxville Lost and Found Blog, what is now “Friedman’s Loft,” named after its best-known business, was built in the first decade of the 20th century. First housing Federal Clothing Stores and then Bill’s Auto Parts, the building originally four stories, lost a floor in a fire sometime around the 1940s. After the fire, in an effort to modernize the building, a metal cover was added to the remaining façade and the iconic clock was added to the front.
The building then became Friedman’s Jewelers, owned by Max Friedman, a prominent member of Knoxville’s Jewish community and a leader in the city, spending two decades on city council. His business was the longest tenured in the spot and it became something of an icon on Gay street.
The building sat vacant for some decades after Friedman’s closed and in the 1990’s the metal was removed for the front. In the first decade of this century, façade was replaced with the more modern appearance it has today. Sanders Pace was contracted for the design, which subsequently won architectural design awards.
The newly remodeled building was named after the jeweler and the most recent remodel includes a stunning use of the original vault as a speak-easy. According to Mr. Smith, “We also remodeled the old vault that was in the building and turned that entire area into a private “Speak Easy” with antiques from the early 1900’s during prohibition. On the walls there are also old pictures of downtown Knoxville and that building highlighting some of the history including the old clock that the building was known for having on its front Gay St. facing wall.
The photographs you see with this article do not do the space justice. The residential space alone includes about 10,900 square feet. There are five bedrooms, four-and-a-half baths, a spa room with massage beds and sauna, rooftop access and an elevator that moves from basement to rooftop.
The second floor is devoted to living space, with numerous seating areas, a large dining space and kitchen. The third floor is devoted largely to bedrooms, with some additional seating area. On the ground level, the rear of the floor is devoted to the speak-easy, with the bar located inside the former safe. A collection of fine whiskeys (including a complete collection of Pappy Van Winkle) stocks the space. Comfortable seating and a poker table are included.
The basement level of the residence includes a full kitchen, pool table, shuffleboard and a seating area with a large television. The floors here and on the first floor are polished swirled cement. Also including out the back of the basement is a two car garage situated at ground level due to the slope.
The residence is for rent, though Josh said he doesn’t expect or intend to rent it often. The cost starts at $1,500 per night, and Josh said the space has already been rented by multiple groups within the first week of listing. In an interesting twist, the website also indicates the building is available for a purchase price of $6,000,000.
All the details are available on the website, where you can also take an amazing 3-D tour of every room.