A Look Inside the Candoro Marble Building 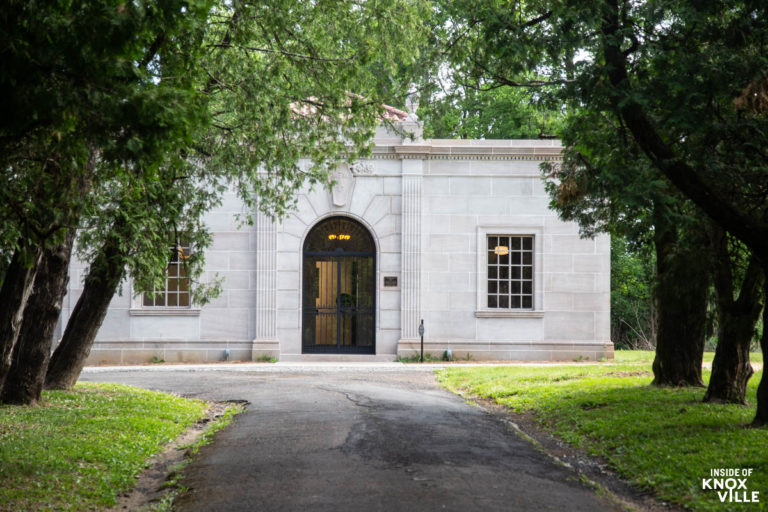 The Candoro Marble building, located at 4450 Candora Avenue, just off Maryville Pike in south Knoxville, served as a showroom and offices for the Candoro Marble Company. Built in 1923, the building is now on the National Register of Historic Places. Designed by Charles Barber and Barber McMurry Architects, the Beaux-Arts building is constructed of Tennessee Marble.

The building also utilized expert artisans in its construction. From the website:

Albert Milani sculpted many of the interior and exterior marble pieces, including the delicate ribbons carved into the bases of columns and the bold shield above the main entrance. Samuel Yellin, famous for ironwork seen throughout the country, crafted iron doors, gates, and hardware with elegant details underscoring his masterful control over his medium. The interior wall painting by Hugh Tyler in the vestibule follows the curved lines of the domed ceiling with its ornate acanthus leaves.

You can see more of Albert Milani’s work when you look at the massive eagles atop the downtown post office.

The Candoro Marble Company was established in 1914 by “John J. Craig III, F.C. Anderson, W.J. Donaldson, and S.A. Rodgers. The combination of the first letters of each of the founders’ surnames makes up the name Candoro. The name is also an allusion to a famous Italian marble called Candora.” Local production of Marble peaked in the decade the building was constructed and the business would close in 1982.

After being vacant for some years, and in danger of demolition, the building was added to the National Register in 2005. Beginning in 2000, a group of volunteers and five angel investors set out to preserve and stabilize the building which had deteriorated and been vandalized. They began programming, including the annual Vestival celebration.

In 2014 the Aslan Foundation purchased the building with the goal of returning it to its former glory. After some delay and extensive planning, the restoration work began in 2019 and proceeded through the pandemic. The result is not only a building worthy of celebration, but a comprehensive plan for utilizing the facility. As noted in yesterday’s article, Aslan and Sanders Pace Architects were recognized for their high quality work in bringing the building back to life.

Andrea said that the Aslan Foundation wanted the building to be lovingly restored, “but also wanted it to be accessible to the public.” They wanted to be sure it was open a significant number of hours through the week. Finally, they wanted to offer financially accessible studio space for local artists who are selected by committee.

Andrea proudly pointed to numerous details that reveal not only the original beauty of the building, but also the meticulous detail with which it was restored. The original plans for the building were housed in the McClung Collection and guided each step of the restoration. The level of care is on display even as you approach the building with the two urns over the doorway. They were reconstructed precisely from photographs by Tennessee Marble, as the originals had disappeared.

Just inside the beautiful front doors, a beautiful ceiling fresco by Hugh Tyler had to be restored. Hugh Tyler painted frescos in the University of Tennessee Hoskins Library and his work can be seen behind the alar at the front of the Nave in Church Street United Methodist Church. He was James Agee’s uncle. EverGreene Architectural Arts out of New York did the tedious work to restore the fresco to its original beauty.

The iron door to the show room had been lost and had to be recreated. The work was done by Derek White at Bird on a Wire Studio. White, long a student of famed metal worker and constructor of the original door, Samuel Yellin, was able to reproduce the missing door as it had originally appeared.

The front room displays numerous examples of book matching – marble arranged as mirror images. The original air ventilation system is hidden behind marble grates which are still visible. Marble baseboards, some of which were missing, were meticulously matched by Tennessee Marble Company. The porous marble in the vestibule was cleaned with a special gel requiring ten applications and removals.

Through the newly recreated iron door, the space opens into the showroom, which is now the gallery. Former offices off that room and the receding hallway are now artist studios. The five studios are currently fully leased and managed, along with the gallery, by Tri-Star Arts. The floors in each of the offices served as examples of marblework that customers could select. An external carriage house has also been restored.

The building also includes space for workshops or small conferences and the office and studio space for Tri-Star Arts. Tri-Star Arts, founded by Brian and Carrie Jobe, has made Candoro Marble their home base and they manage the contemporary art gallery and artist studios.

The gallery space, the former showroom for the marble company, currently features the second exhibition mounted there by the group, featuring the work of Knoxville’s Sarah Shebaro and Chattanooga’s Raymond Padron. Titled, “Elements and Dreams,” Brian said the quite different work produced by the two artists’ works together well for the show which will run through July 10.

Rentals for events, including weddings and photo shoots are handled through Molly Jo Events.

The gallery is open Tuesday through Saturday from 11 am to 5 pm.