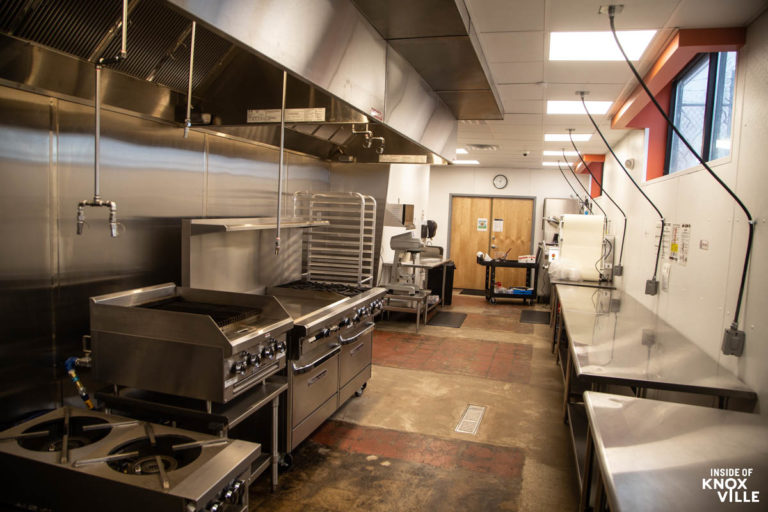 Real Good Kitchen, owned and operated by Bailey Foster is a “full-service, shared commercial kitchen facility,” located at 2004 Magnolia Avenue. Ms. Foster said she had worked on the idea for about four years. She is originally from Knoxville, graduating from high school here before leaving for about 25 years. During that time, she lived in San Francisco working in the grocery industry and New York working in the publishing industry after getting an MFA in creative writing.

The theme of those jobs, she said, was customer service. She returned to Knoxville in 2013, still working for her most recent employer, but got laid off. She looked for a new opportunity to be connected to the community where she had grown up but hadn’t lived since high school. She worked for the public defender’s office beginning in 2015 and “was introduced to the community in a whole different way.”

She left that job in early 2017 and while searching for what to do next, she thought of a shared incubator kitchen in San Francisco where she had been involved. La Cocina is a non-profit which grew out of the Mission District, but now serves the entire bay area. It focuses on immigrant and female owned businesses.

Not only was the food coming out of the kitchen incredible, but I was really impressed by the impact they were able to make on the food economy in the bay area. They changed the face of who could own a food business by creating a facility where folks with an idea and talent could come in and be helped through the process, have the barriers lowered and have the resources to level the playing field.

When she returned to Knoxville, she did not immediately consider pursuing a similar concept, but “talking to friends who are chefs and beginning to understand there was no similar space in Knoxville,” she began to consider the idea. “When I left here in 1990, downtown was not a place where things were happening.” Seeing all the new-found prosperity made her want more people to have access to that avenue of success.

She wanted to meet the market need for chefs who need a space to work and to incubate businesses and create opportunities for communities such as “women who want to start a business, our growing LatinX community, our refugee community. Food is such a connector and such a common experience.” She became convinced it would be good for businesses as well as those who face barriers to success in the food industry.

Getting the business started took longer than she anticipated. She wanted a large enough space to realize her vision and wanted it on a public transportation line and near downtown. She had to line up the capitol and find the right space, as well as establish an organizational structure. She found the current buildings (she owns two side-by-side, though only one is currently being utilized) in the fall of 2019 and “the pieces fell together.”

She said she never imagined it would take over a year to open the business, which hosted its first clients in January of 2021, but “all things come in time.” She said the pandemic slowed things down a bit. She said they stepped back for a few months and the city’s ransomware attack slowed down the permitting process. She said it gave them time to focus and to build some community connections.

They are organized as a Tennessee Public Benefit Corporation, meaning they are required to “balance profitability with community impact.” She said the “B-corp” movement is an international movement to “encourage doing good while doing business.” The business is for-profit.

The space offers an entrance that accommodates food delivery, storage space for every member, a shared walk-in cooler, a high-temp dishwasher, and a full commercial kitchen, which is growing as they can afford additional equipment. The facility includes about 2,500 square feet including one dedicated chocolate-making space for Chris Kopek of Lirio Chocolate and five other prep spaces available for use.

The building incudes about 2,000 square feet of frontage on Magnolia that is not currently in use. Bailey said they will determine its use as they evolve, but she would like to see it be a more public space, such as an event space, perhaps a take-out food service or a retail space for their members. It could be a combination of all of the above.

She said they would like it to be something that benefits the community. “We intentionally located ourselves in east Knoxville with the hope that we can be a part of the equitable redevelopment of this neighborhood.” She also owns an adjacent building of similar size and feels it will likely offer expansion space.

Real Good Kitchen opened on January 8 and had three businesses that produced that day. They have grown to fourteen members and she says they have room for upwards of fifty. One, NeverFull Waffles, which largely services the UT area with late-night waffle delivery, officially started business that day. New members have been added each week and they now have fourteen using the kitchen, with a fifteenth almost ready.

Businesses have to get a license and all permits before starting use of the kitchen. She hopes in the long term to be an increasing resource for the business side of the food production companies. “My hope in the long term is to be a full-scale food entrepreneurship center and have a program with cohorts that is really a food business education program.” She mentioned the San Francisco kitchen as a model that offers a full program through concept, recipe development, access to capital and assistance with moving onto their next goals for their business.”

She said they offer these services now, but in a much more informal way. She, Melanie Mullins, and Anna Bogle help clients with getting licenses, finding financial backing, business counseling through the Knoxville office of the Tennessee Small Business Development Center. She said they have referrals for accountants, web designers, branding and design help and more. She said they work with developing efficient processes. Some of the chefs have never used a commercial kitchen and need to learn the regulations involved.

She also is intent on connecting the various businesses and offering a collaborative environment. She says it is more difficult to start and grow a business in isolation. It’s a particularly important as we come out of a period of enforced isolation. About half the businesses are new and range from food trucks to chocolate, pimento cheese, bread, and pre-packaged baby food.

She points out that this one of the lowest risk entry points for getting into a culinary business. Even food trucks, considered an entry point, can cost tens of thousands of dollars to prepare them for use.

A space like ours makes the possibility of starting a food business so much greater. It gives you room to explore and fail . . . If we can keep people from making the mistakes or provide them with a place where they can make the mistakes and recover and try again, that is what it is all about for us. At the heart of this I want to see a more diverse and inclusive food community.

Members may choose a package that fits their needs best, starting with a package including as few as eight hours per month of kitchen access. Packages go up to 100 hours or more. The packages are all-inclusive for the facility. All requirements and contact information is listed on the website. You can also see a list of and link to each of the businesses using the kitchen here.