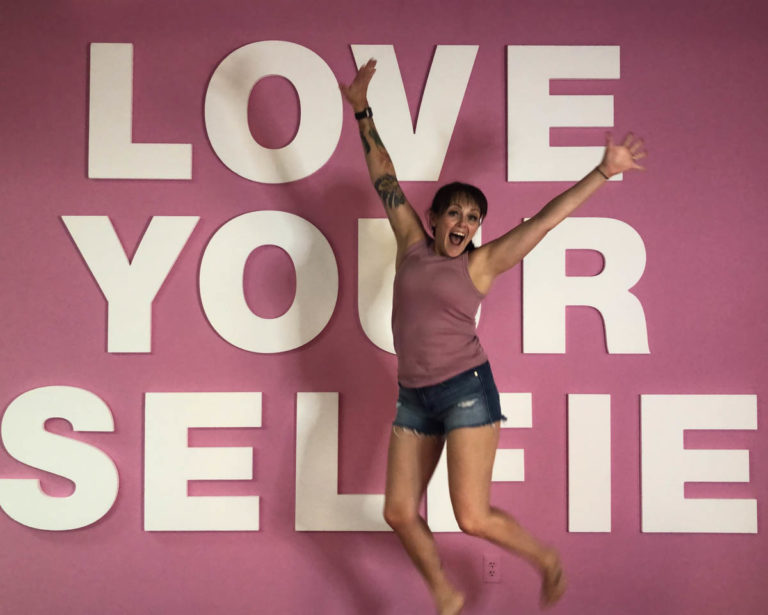 Heather Showing You How It Works!

An immersive destination experience is coming to 906 Sevier Avenue, when Knox Selfie Lab opens below Hi Wire Brewing. Patrons can expect 12-18 fully interactive photo labs, with sets changing at least quarterly. The business has sponsored recent pop-up labs at Marvel My Fitness, including a Love Lab and an Up, Up and Away Lab.

Behind the new business, is Heather Berthiaume, Iowa native, who now lives in Blaine on a small farm with her husband. She graduated high school in Iowa. She grew up traveling, as her mother worked for an airline. In her travels, she fell in love with California and moved there for two years after high school before returning to Iowa. She bartended and eventually took a turn working in a real estate office.

She met her future husband when he was temporarily in Iowa working on a natural gas line. She eventually left Iowa with him and began working on jobs with him wherever the work took them. When they decided they wanted some property and a home base, the first looked at Asheville, but the 45-acre farm in Blaine presented itself.

It gave them the land that he wanted and the proximity to a city that she wanted. It’s less than a half-hour from downtown Knoxville. She said Knoxville felt like home from the beginning. She’s traveled to many cities and never felt a city to be so similar to Des Moines. There are, of course, mountains here, but otherwise she says the two are quite similar.

She said she is always wanted to create things and to be a role model for young girls. She got a taste of that working on the pipelines in her pink hard hat. While working in New York, she had a group of schoolgirls who could not believe a woman was doing that work and she became friends with them, hoping they saw they could do anything they wanted.

Owning a business seemed a natural step and she is currently working on her bachelor’s degree in Business Administration through online classes. The idea for this business came when, on a whim, she and her sister took their grandmother to a selfie business in the mall there. They had a blast but were surrounded by tweens. She began thinking what a similar business might look like if it were geared to grownups.

As she considered locations here, she looked at the mall, but didn’t like being locked into mall hours. She looked on Gay Street and on Kingston Pike, but found the perfect spot under Hi Wire Brewing. She does not have investors or loans and needed a place that offered to help with build out. She said she found the perfect landlords in her new building and she loves south Knoxville.

The business will offer the decorated photo booths, including props and lighting. She wants it to be interactive with patrons moving props, choosing their lighting, and finding their perfect photo. She’ll have a ball pit and other fun spots, and everything will be designed to make fun or beautiful photographs of yourself or your gang. In addition to lighting systems, each booth will have holders for phones so everyone can be in the photo.

She’s still working on details, but the cost looks to be around $20 for a sixty-to-ninety-minute session. The 15 or so booths would all be free game as patrons are free to move from one to the other taking as many photos as they like. Some booths will be themed to holidays, others will simply be fun and beautiful spots for photos. She hopes to have at least one set aside as a rotating artist spot and is looking for interested local artists.

Due to COVID-19, she’ll take extra precautions. While the space will always have limited numbers of customers at one time, the limit will be set lower so everyone can maintain distance. Hand sanitizer will be provided, and booths will be wiped down often. Patrons will wear masks except when inside a booth.

She wants the spot to feel very local and invites input on event suggestions. She excited to be a part of the community and hopes to work with other businesses. Artists interested in designing a booth may call the number below or contact her via Facebook or Instagram.

Hours are still being determined, but she’ll likely start with noon – 8:00pm or 1:00pm to 9:00pm and adjust as she sees demand. She plans to be open six days a week. She will likely have extended hours on the weekend. You can call ((865) 585-0654) to reserve a time slot for a visit or to inquire about renting the space for a private event.