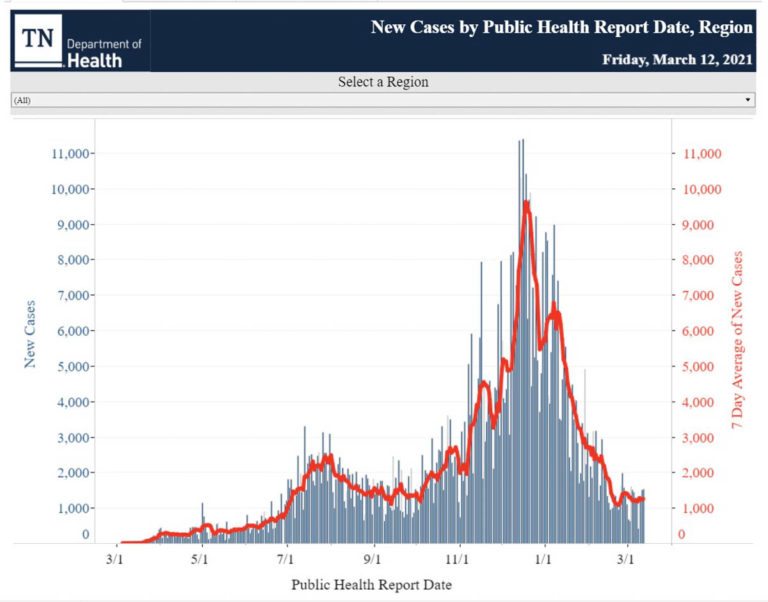 Welcome to another week. Happy Spring Break for those who get one. We are very close to cementing some of our gains. Pleas consider that as you make your plans, not only for this week, but for coming weeks. We can get there if we keep pushing.

The most discouraging news you’ll read in this report is that cases are rising around the world. Just over 120.5 million cases have been confirmed around the world, with just over 97 million cases reported as inactive, while roughly 20.8 million currently have an active case of the virus. Over 2.9 million cases were confirmed in the last seven days, a pace 100,000 higher than the previous week and reflecting the third consecutive week of increase in the pace of new cases. The seven-day average for new cases is 420,780, up from a low of 361,091 on February 20.

A total of 2,666,886 COVID-19 deaths have been confirmed, including 59,180 in the past seven days. The number of deaths for the week is about 1,800 fewer than the previous seven-day period. On average for the last seven days, 8,454 deaths were attributed to the virus daily, a drop of 262 per day from the same day a week ago. The rate of international deaths is similar to early/mid November.

A new wave (it is being called the “third wave”) is sweeping across Europe, prompting plans and calls for further lockdowns. Italy has begun a major new lockdown and others are likely to follow as the spike, driven by a range of new variants, crosses the continent. Vaccinations have languished on the continent with most countries at 13% or lower of the population having had at least one shot (it is 21% in the U.S.). Vaccination rates are very low in South America and have barely started in Africa.

The U.S. has confirmed roughly 30.1 million cases of COVID-19, including 380,611 over the last seven days, about 38,000 fewer than the previous seven days. About 22.2 million cases in the country are inactive, while just under 7.4 million Americans currently have an active case of the virus, down about 1.4 million from the same day the previous week.

Yesterday, 36,896 new cases were reported in the U.S., along with 629 deaths. The numbers reflect roughly a decline of 5,000 cases and 90 deaths compared to the same day the previous week. Those statistics come with a caveat: a growing number of states have stopped reporting COVID-19 numbers over the weekend. Tennessee joined ten other states in not reporting numbers for Saturday or Sunday. The states will report the numbers for those days on Monday. With over 20% of the state data missing from weekends, it renders a Monday update less than optimal.

Even the averages are impacted, as seven-day averages including those two days will necessarily be lower until that data is added back in later in the week. Given that disclaimer, the country is averaging 54,373 cases and 1,290 deaths per day. New cases are down about 5,500 per day from the previous seven-day period and 435 per day in deaths.

The U.S. continues to lead the world in cases ( 30.1 million to Brazil’s 11.5 million) and deaths (547.3 thousand to Brazil’s 278.3 thousand). Brazil is now closing the game in each category as they report more cases and deaths than the U.S. each day. Among countries with at least 1 million in population, the U.S. continues to rank third in the world in per capita cases behind Czechia and Slovenia.

Among the same group of more populous countries, the U.S. dropped from seventh in per capita deaths from COVID-19 to eighth as Italy’s surge lifted it up a spot. The U.S. ranks first in total testing, but continues to rank ninth in per capita testing. The U.S. remained fourth among countries in percent totally vaccinated at 11%. The U.S. vaccination percentage is up from 9.2% a week earlier.

With eleven states not reporting for the day, comparisons of state data to previous weeks is rendered irrelevant. Among the states reporting yesterday, those reporting the largest numbers included New York (6,093), Florida (3,699), New Jersey (3,310), California (2,197), and Pennsylvania (1,822).

As Europe sees rising rates and increasing restrictions, the U.S. has seen sharp declines in cases, hospitalizations and deaths since early January and restrictions are being eased across the country, with some states, such as Texas removing all restrictions. Despite CDC pleas to the contrary, millions of Americans flew this weekend, marking the first year-over-year increase during the pandemic.

Spring Break crowds are gathering in large numbers in Florida (where restrictions have been largely lifted) and elsewhere. Protests erupted across the country over the weekend, with crowds demanding schools re-open five days a week. Dr. Fauci said yesterday that the U.S. will have a much greater level or normalcy by July 4, even as stimulus checks hit bank accounts this week.

Without elaboration, Tennessee announced by tweet on Saturday morning that it will no longer report COVID-19 data on weekends. Numbers for those days will be reported simultaneously with Monday’s data on Monday afternoon. As stated above, eleven states are doing the same.

The most recent numbers, released on Friday afternoon, indicate 789,652 total cases and 11,639 deaths. 653 COVID-positive Tennesseans were reported in the hospital as of Friday, with186 in ICUs, and 102 on ventilators. According to Worldometers, the state was averaging 1,251 cases per day and 15 deaths per day through Friday. The current averages reported there are distorted as they reflect two days of no deaths or cases.

On Friday the state reported over 19,000 tests at a 6.08% positive test rate. Johns Hopkins University is reporting a seven-day 8.2% average for the state. As of Friday (data also not updated over the weekend), the state reported 1,854,473 vaccinations had been given, including 251,790 for the previous seven days. 16.39% of state residents have gotten at least one shot, while 653,552 Tennesseans are fully vaccinated.

Knox County, to this point, continues to report numbers on weekend days, and reported 72 new cases on Saturday, 50 on Sunday and 34 today. The three-day total of 156 is 54 fewer than the same days a week before. Pandemic case totals for the county are now 40,725 confirmed cases and 7,461 probable cases. 46,576 cases are inactive, while 1,015 Knox County residents are currently COVID-positive. It is our lowest number of active cases since October 10 (993).

There are currently 34 COVID-positive Knox County residents in area hospitals, down from over 200 just over two months ago. 1,290 have been hospitalized at some point during the pandemic. As of yesterday, the number currently hospitalized dropped to 31, the lowest it has been since September 22 (29).

595 Knox County residents have died of COVID-19 since the beginning of the pandemic and two additional deaths were reported in the last three days. As I suggested recently, an increasing percentage of the diminishing number of deaths might be among those below 75, as the percentage vaccinated in the oldest group is much higher than the general population. That was the case this weekend, as one person was between 45-64 and the other was between 65-74.

The state is reporting an 8.7% average positive test rate for Knox County over the last seven days. The most recent update for local vaccination numbers indicate 126,640 shots have been given to Knox County residents. 17.31% of county residents have received at least one shot and 45,151 are fully vaccinated.

As of Friday afternoon, the Knox County School system is reporting 73 active cases and ended the week with 799 in quarantine or isolation. All schools are currently schedule to be open starting March 22, when students return after spring break. The system will not issue updates this week and will not be included in my reports.

The University of Tennessee is reporting 47 active cases, 3,001 recoveries, 13 new cases over the weekend, and 210 in isolation or quarantine. Those in quarantine include 24 staff members, 108 residential students, and 78 non-residential students. Cases and isolations continue in a narrow range at a relatively low level. No additional clusters were reported.