Canvas Can Do Miracles to Open at 1218 Magnolia 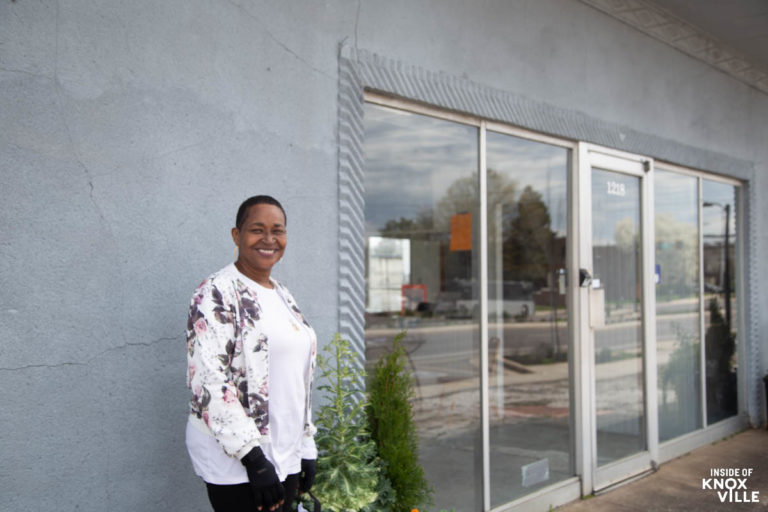 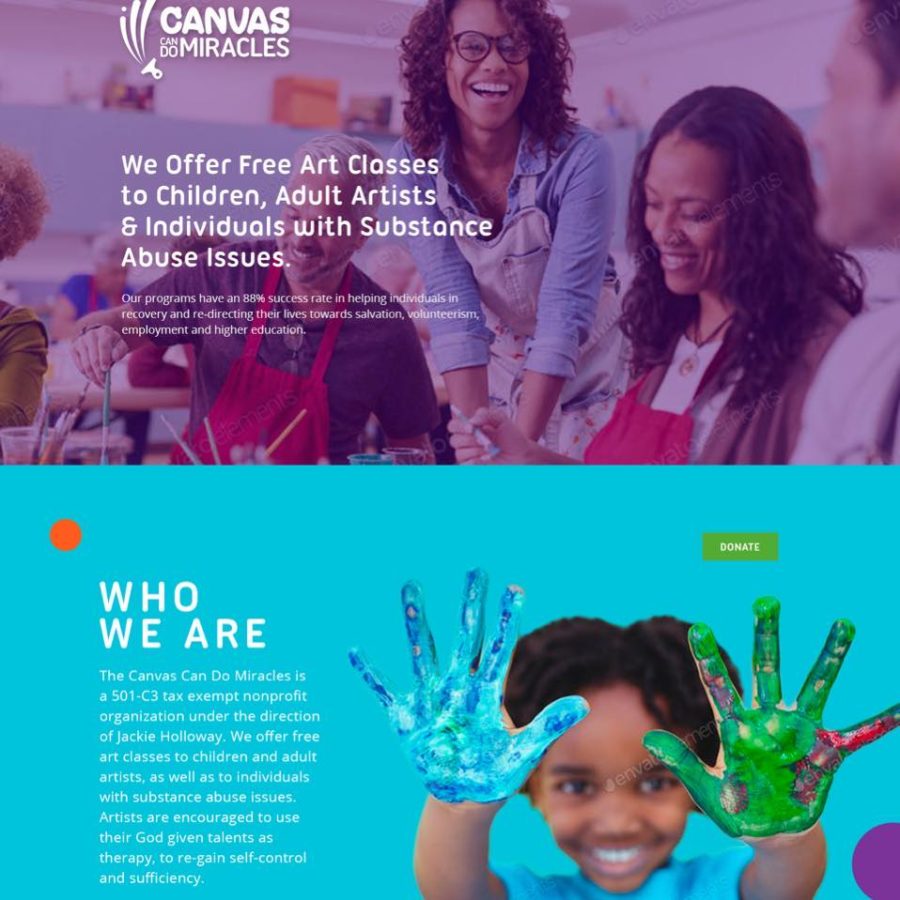 I recently learned that Canvas Can Do Miracles, an organization that has served Knoxville for years, will soon open in its new home at 1218 Magnolia Avenue. I met with Jackie Holloway to learn more about the organization and the woman behind it. We sat in the bare space that will soon house a vibrant artists’ studio. Jackie’s journey to lead a non-profit designed to help others involves a story that didn’t always appear to promise a happy ending.

Jackie grew up in Claxton, with a father who worked at Magnavox and later started the Furniture Barn in Oak Ridge refurbishing furniture and reselling it. He also did oil paintings, while her mother was a seamstress, handmade drapes, caned chairs and did macramé. Jackie started doing her own art early, doing portraits and has since pursued found art and painting. After graduating from Clinton High, Jackie attended Kentucky State College.

She said she wanted to be surrounded by African American students as she had been one of a very few black students at Clinton High School. She walked on to the basketball team where they suggested she redshirt, leading her to quit the team if she could not play immediately. She said she still regrets the decision.

She majored in physical education, but didn’t finish, and instead got married, had two children and eventually attended Draughn’s Business College which was closed before she could finish, and she lost all her credits. She worked in TVA towers for seven years, but also waited tables at Gradys’ and helped open Silver Spoons and Buster Muggs.

It was while working at the TVA Towers in 1988, that she and her husband were introduced to crack cocaine. Her mother, father, and stepfather died and, in her grief, her drug use escalated. What followed was twelve years of addiction in which she lost everything. She was arrested for shop lifting and eventually was living in her car.

She got a job at the Hilton, and moved into the Regency Inn, but realized she had to “flee temptation,” and she moved to Corryton. Near where she lived, she could hear a peacock calling at night and felt it was God calling her name. On a walk one day, she found a stick that looked to her like a mutilated person.

She kept it and named it “Job,” using it to remind herself that no matter how scarred you may be, you can move forward. Even while still addicted, she began to forma vision of opening an art studio to everyone and feeding anyone who came. She had always created art from a young age but found herself making art on paper plates. She knew she would offer art classes at no cost.

She got a job with Nova Information in the security department, even as she continued to struggle with her addiction. She said she would get rid of her crack pipe only to dig it up again. She went through rehab unsuccessfully, eventually breaking her habit cold turkey. She quit using drugs in 2000, quit drinking and moved on with her life.

She re-married in 2001 and started Art by Jackie in 2004. She developed a plan for Canvas Can Do Miracles using her sales of art and candles through Art by Jackie for initial funding. She spoke to groups about addiction and looked for a non-profit that would give her space for a studio. Just as she was about to give up, Alan Jones at Literacy Imperative offered her a space. She had to empty the room of books before she could start.

She began teaching classes every Wednesday, starting with a meal, just as she’d imagined. Everyone, then as now, was welcome, no matter what their station or situation. She offered a class for children on Fridays and sent them home with a backpack full of food for the weekend. She also took them on field trips to the Knoxville Museum of Art, to parks and other places. In 2008 she held Miracle Fest as a fundraiser at the World’s Fair Park, featuring bands, entertainers, dancers and vendors.

She stayed at Literacy Imperative until they sold the building, and she began teaching classes at the Boys and Girls Clubs and at Walter P. Taylor Homes. She led an effort bringing together 100 artists to paint a large mural in a spot where dealers worked. She invited the dealers, and they took ownership of the project, even helping repair it after a strong wind knocked it down.

She applied for and got grants. She donated many of her materials before landing at The Avenue briefly in 2019 to early 2020, feeding the homeless population and offering art for those who wanted it. In early 2020 she moved again to Connect Ministries until she lost her space due to COVID shutdowns. She recently won the Urban League pitch contest and was connected to the space at 1218 Magnolia Avenue, owned by Josh Smith. He is letting her use the building and the property at no charge.

Anyone who is interested in art is welcome at her free classes. She said, “Normally if you have a program for homeless people, it is only them. I want people to interact; white, black, anyone who art can help. She plans to have rolling desks for distancing and guest artists like Bobbie Crews. Audrey Wallace will offer children’s classes simultaneously with adult classes. She plans a class for disabled adults on Thursdays, working with the Sertoma Center across the street.

She also has plans for the exterior portion of the property and plans to purchase a large tent to offer a space for weddings, meetings, or other gatherings. She worked with Southern Graces event planner for a while and feels comfortable adding that use to the mix. She hopes to have a community garden on the property where people may feel free to help themselves to food. She’s gotten grants from the East Tennessee Foundation and from United Way to help her get started. She will also offer web space to any of the more serious artists who would like to offer their work for sale.

Knowing that many in the population she attracts have needs that go far beyond what she can offer, she has signed memorandums of understanding with several local providers who will give her referrals preference. She is connected to Covenant Counseling for Christian or non-Christian counselors. She works with Great Starts through Helen Ross McNabb to offer inpatient or outpatient addiction treatment. Friends of Literacy offers help learning to read, she has connections to medical providers, English classes and UT College of Social Work will do evaluations.

When I characterized her enterprise as “a social service agency with an art emphasis,” she agreed. “You can be as serious with art as you want. Use it to release stress or become involved in art contests.” She has taken student work to the Louie Bluie Music and Art Festival, the county fair and elsewhere.

For now, she and her husband are completely remaking the space inside and out to a full functional art and event space. She plans to hold her first informational class on May 26th, followed by a grand opening on May 29th and her first official class in the space on May 8th. There will, of course, be food.

Here’s Jackie discussing her program in connection to recent initiatives to help stem violence in the east Knoxville Community.