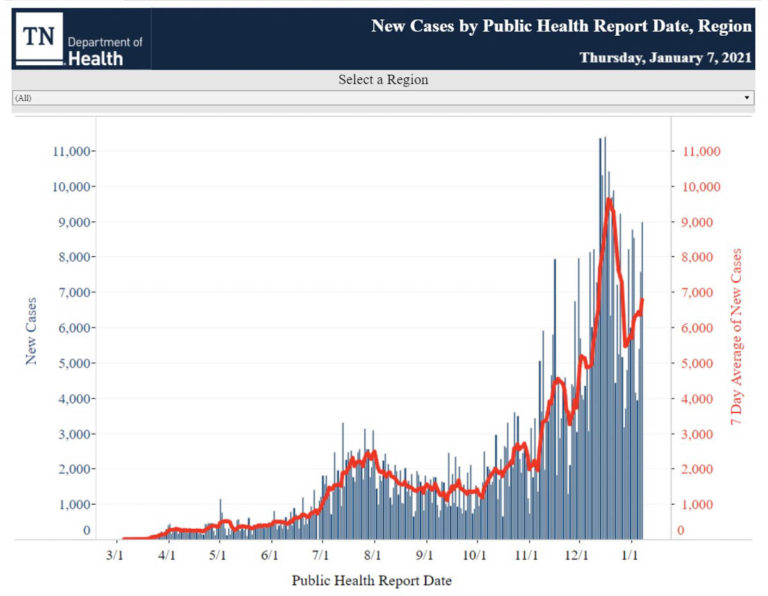 I hope you are safe, warm, and dry on this wet and cold day in January. Maybe we’ll see some snow as the day goes along. It’s been another strange and interesting week. The kids went to school three days in the middle of the week and sort of went today, but not. Record deaths from COVID-19 were recorded on consecutive days across the country. Washington, D.C. went crazier.

We’ve taken to eating lots of soup and cuddling on the couch with the lights low. It is going to be a long winter, but spring will follow. This time will pass. Support the people around you. Be kind. Stop the meanness on social media. Let’s all just be better humans and we’ll come out of this in better shape.

Test reporting took another step back into the range it had more-or-less maintained before the holidays and the result was that 9,000 new cases of COVID-19 were reported in Tennessee. It was the highest single-day total since Christmas Day. The seven-day average which, following its sharp holiday decline, has been rising since December 28, is now at 6,776 new cases per day.

There have now been 549,527 confirmed cases and 84,710 probable cases reported in the state. Of these, 555,634 are considered recovered, while 71,111 people are counted as having active cases of the illness.

An additional 100 COVID-positive Tennesseans were admitted to the hospital yesterday, bringing the total to 14,935 since the beginning of the pandemic. There are currently 3,341 of this group currently in the hospital. Put another way, 22% of the ten-month total of hospitalized Tennesseans are in the hospital at this moment. It represents a new single-day high for hospitalizations.

Of the group currently hospitalized, 789 are currently in ICUs across the state, while 457 are on ventilators. Each number is just below recent highs. Hospital beds across the state are at 88% capacity, while ICU beds are at 92% capacity. These are state numbers and availability varies between the different sections of the state.

The state has reported more than 100 deaths on a single day ten different times during the pandemic. All ten were reported in the last month. With the 111 deaths reported yesterday, the state has reached that mark three out of the last four days, with the fourth day coming in at 99. Total deaths in the state have now reached 7,492 and average daily deaths have reached 84 in the last seven days.

The state reported just under 40,000 tests for the day yesterday, bringing the total tests given in the state to over 5.75 million. With the increase in tests came a very modest drop in positive test rates to 19.87%. The goal remains doing enough systematic testing that the positive test rate is 5%. Johns Hopkins University currently has our seven-day average for positive test results at 24.1%.

The state has not updated its vaccine reporting site in four days.

Local hospitals are reporting 173 Knox County residents are currently hospitalized, bringing the pandemic total to 895. The 173 is off the record 205 reported three days earlier.

Two additional deaths were reported, bringing the pandemic total to 361 Knox County residents who have died of the illness. One person was between 45 and 61 and the other was over 75 years old.

Knox County Schools are on a virtual schedule today due to the potential for snow, meaning they attended three days in the shortened week. It highlights what will likely be a permanent result of the pandemic and that is, there little (and diminishing) reason for instruction to be preempted for a day. The technology will only get better and more equitable. In a sense, it is safer to simply announce a virtual day and not have people on the roads if they are bad.

Metrics for student and teacher attendance, as well as for cafeteria and bus staffing are all green. The metric for custodians is yellow and for substitutes, it is red. All schools are in session, with the exception of today, due to weather.